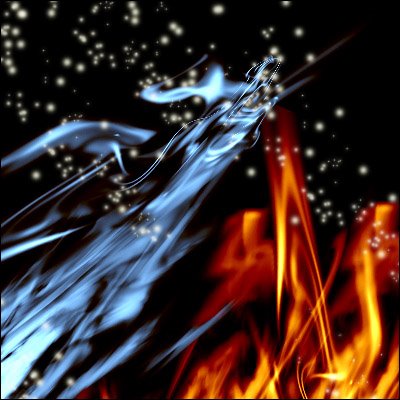 To the north lies Niflheim, covered by ice and snow.

To the south lies Múspell, a world seething in fire and flames.

Between was a vast emptiness called Ginnungagap.

Venomous water from the spring Hvergelmir in Niflheim flowed into this emptiness, freezing again and again, layer after layer of ice and rime frost.

Hot winds from Múspell blew over the ice, causing it to thaw and drip.

Life began in these drops and took the form of the giant, Ymir, the first of the evil frost giants.

As Ymir slept, he sweated. A man and a woman grew out of the ooze under his left armpit, and one of Ymir's legs fathered a six headed son on the other leg. Thus, Ymir was the forefather of all the giants.

Some of the other melting ice took the form of a cow, Audhumla. From her teats ran four rivers of milk, enough to nourish Ymir. She fed off the ice, licking the salty blocks. Her licking formed one of the blocks into the shape of a man. The shape became animated, and the man named Búri walked free out of the ice.

Búri had a son called Bor, who married Bestla, the daughter of a giant. They produced three sons, Odin, Vili, and Vé. 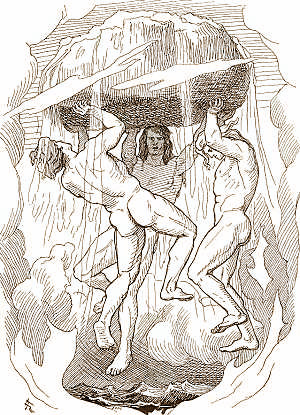 The three sons of Bor had no use for Ymir and his growing family of brutish giants. They attacked and killed Ymir. So much blood flowed from Ymir's body that it drowned all the other giants except for Bergelmir and his wife, who rode away in a hollowed out tree trunk floating on a sea of gore. All the giants today are descended from them.

Odin, Vili, and Vé took Ymir's body to the center of Ginnungagap. From his body, they made the world. Ymir's flesh became the earth, and his unbroken bones the mountains. From his teeth and bone fragments, they made rocks and stones. They used his blood to make the lakes and ocean encircling the world. They raised Ymir's skull over the earth to make the sky and placed a dwarf at each of the four corners to hold up the sky. Glowing embers from Múspell were thrown into the sky to make the sun and moon and stars and planets. Ymir's brains were thrown into the sky to make the clouds. Ymir's eyebrows were used to make a fortification around the world, to protect against the giants. Inside the fortification is Midgard, the realm of man.

One day, Odin, Vili, and Vé were walking along the land and came across two trees with their roots ripped out of the ground. One was an ash, the other an elm. They fashioned these into the first man and woman. Odin breathed into them the spirit of life. Vili provided consciousness, wits, and a feeling hearts. Vé gave them the gifts of hearing and sight. The man was called Ask (ash) and the woman Embla (elm), and they were given Midgard in which to live. All the races of men are descended from them.

One of the giants had a daughter named Nótt (night); her son was named Dag (day). Odin set them in horse-drawn chariots in the sky to ride around the world. Nótt leads the way, and her horse is called Hrim-faxi. The drips from his bit form the morning dew. Dag follows drawn by his horse Skin-faxi, whose gleaming mane lights up the sky and the earth.

A man living in Midgard had a son and daughter so beautiful that he called them Sól (sun) and Máni (moon). Angered by the man's daring, Odin snatched the children and placed them in the sky to guide the chariots of the sun and the moon. The sun and the moon are always in a great hurry because they are being chased by wolves, sons of a giantess. 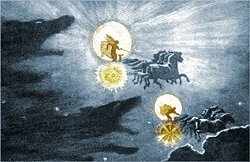 From the maggots that crawled in Ymir's flesh, Odin, Vili, and Vé created dwarves. They have shape and wits of men, but they live under the earth in caves.

Finally, the three brothers built their own realm. Ásgard is a mighty stronghold, with green plains and shining palaces high over Midgard. They built the rainbow bridge Bifröst to link Ásgard to Midgard. The Æsir, the guardians of men, crossed over the bridge and settled in Ásgard. Odin Alfadur is oldest and greatest of them all. 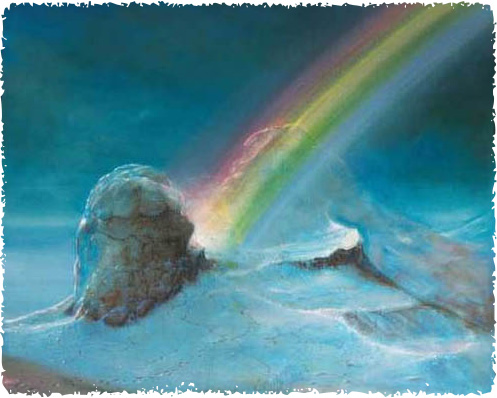 And this was the beginning of all that has happened.

This era is considered to have been the "golden age" of the Norse gods. The poem Völuspá describes an era free of strife, in which there was no lack, no worry, and no rivalry. In the meadow, the gods played a board game using golden playing pieces.