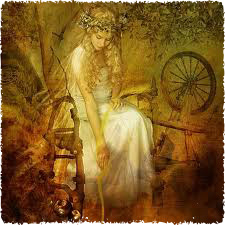 Frigga (also known as Frigg, The Beloved) was the goddess of love, marriage, and destiny. She was the wife of the powerful Norse god Odin, The All-Father.

She was known as a 'seer', one who knew the future though she could never change it.

In ancient times the end of the Winter Solstice, when the hours of sunlight began to lengthen, marked the beginning of the new year and was a time to think of new possibilities that would unfold.

The Goddess Frigga, who sat at her spindle weaving the destiny of man and gods alike, was the goddess associated with the beginning of each New Year.

New Year's Eve, the longest night of the year, is called "Mother Night" in Northern Europe for it was in the darkness of that night that the goddess Frigga labored to give birth to Baldur, the young Sun God who controlled the sun and rain and brought fruitfulness to the fields was born.

The blessing of Frigga is still invoked for birthing women with a white candle that last burned during the winter solstice being used as a charm to ensure a safe delivery.

Frigga is credited with the development of runes as a tool for divination. Runes are stones marked with signs which, when selected, tell what "issues" you are currently confronting in your life and where you need to head to find the answers you seek.

A loving mother, Frigga's ability to see into the future caused her great pain as she foresaw the death of her beloved Baldur.

Even though she knew that she could not change his destiny, she simply couldn't just sit by and watch so the frantic goddess extracted a promise from all things that they would play no role in his death. Unfortunately she overlooked one thing, the mistletoe plant, which seemed too insignificant to approach.

And this was the unraveling of her plan. 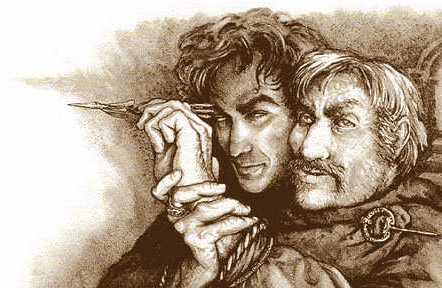 For when the malevolent trickster Loki discovered her oversight, he fashioned a dart made of the poisonous plant and, in a cruel trick, placed it in the hand of Baldur's brother Hodor who was the God of Darkness, and offered to guide his hand while teaching him to shoot darts.

And so he did, guiding the arrow directly into Baldur's heart. Frigga's tears of mourning were so bounteous that the hapless plant that had caused his death took pity. From then on it would bear milky white berries that were formed from her tears.

In some versions of the myth, the story of Baldur ends happily. He is brought back to life, and the Nordic goddess Frigga is so grateful that she reverses the curse she had placed on "the baleful plant", changing it to a symbol of peace and love and promising a kiss to all who passed under it.

Frigga's tender, nurturing side was widely recognized. Her sacred animal was the goose. In Germany she was worshipped as the goddess Holda or Bertha and was the original Mother Goose. When she shook out her blankets, it began to snow.

In addition to being a protector of women in labor, Frigga ensured fertility and was also the goddess called upon to bring a woman love and marriage.   She was also called upon by those who were dying, to ease their transition into the after-life.

The Nordic goddess Frigga is a goddess who keeps us in touch with our intuitive nature and helps us make transitions and new beginning.

And as a goddess of love and divination, Frigga helps keep our lives in alignment with our spiritual selves.

Goddess Symbols and Sacred Objects of Frigga and Freya

Note: The myths of the Norse goddesses Freya and Frigga are often confused in writings about them. If you have not already read their fascinating myths, you might want to read our explanation of this confusion at Frigga and Freya.

Most often the symbols of Frigga represent her special attributes such as the art of foretelling events and weaving destiny. Freya is often represented by symbols associated with her passionate support of those she favored. It is not surprising that many of our icons representing vigorous and spectacular passion are derived from the ancient goddess symbols of Frigga and Freya. 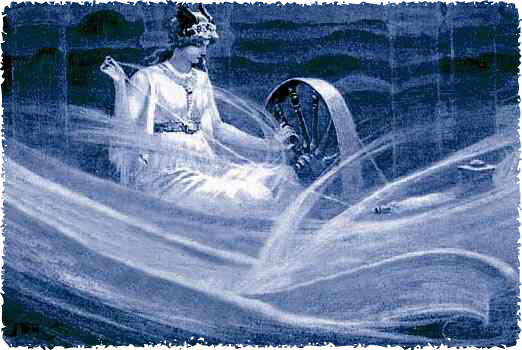