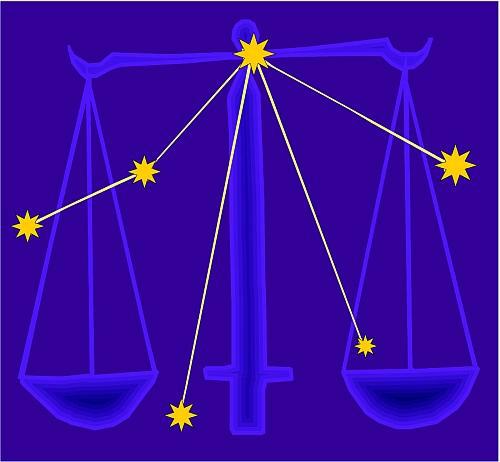 A great deal of this has to do with the controversy surrounding the Virgo myth and its origins. As I explain in the Virgo myth article, the figure that represents that constellation is largely under debate.

If you don't want to read the article in full, I'll cut to the conclusion. I believe that the best representative for the Virgo zodiac symbol is the star goddess Astraea.

This creates a very interesting issue for both constellation myths. If the scales are indeed that of Virgo, then it stands to reason that the figure in Virgo must have to do with justice, as that is what the scales represent. The only problem is that most people believe that the Virgo myth has to do with a virgin, a theme which seemingly has nothing to do with justice, so how does one reckon the one myth story with the other?

Enter the controversy. (If you're confused at this point, then please go read the Virgo myth article. That will make everything much easier to understand.)

Let's pause and talk about Libra mythology on its own for a moment. There is very little controversy over the representative symbol of Libra on its own. Nobody disagrees that the symbol representing Libra is a set of scales, and that those scales represent the scales of justice. They also represent balance and temperance, as well as the dark side of Libra astrology, which is essentially the opposite of those traits. Libras must be careful to maintain balance and not lose themselves into the beckoning chaos around them - but this is a story for another day.

How can this be? One figure representing two constellation myths?

The woman holding the ear of corn in Virgo is Astraea. The scales of justice that glide by her side in the zodiac are her scales. The two never leave one another's side, forever connecting the two constellations with a single mythology.

Of course, I could be wrong. But if I am, then it's Virgo that is represented by someone else. The scales are undoubtedly those of Astraea, and if she is not the caretaker figure shown in the Virgo myth, then she is surely both herself and the scales represented in Libra mythology.

Again, if you haven't read the articles about the Virgo myth or Astraea, I highly recommend them. The mythology of Libra simply can't be explained without them.

Libra Mythology, What is it about?

In Libra Mythology, Libra is a young sign. The Libra constellation lies between Virgo to the west and Scorpius to the east. Libra is the only zodiac sign that isn't symbolized by a person or an animal.

The claws of a scorpion are what symbolized Libra in the beginning, not balance.

When the ancient Babylonians formulated the zodiac there were just 11 zodiac signs.

In ancient Mesopotamia, an arm and the pans without a base depicted a scale. The scale was strung up with twine fastened to the center of the limb, showing a similarity to a scorpion strung up by the tail with its arms extended.

There was a confusion with the translation of the words, zubānā and zibanitu (meaning- weighing scale' and 'scorpion, respectively).

The two translations of the words zubānā and zibanitu led to the constellation the scorpion’s claws or Chelae Scorpionis. Therefore, in Babylonian Mythology, Libra started out as the claws of the Scorpio.

Later when the Greeks looked at the constellation, they thought it looked like a set of scales held by Astraea or (star-maiden).

Astraea was Virgo, the Greek goddess of justice.

So, in Greek mythology, Libra is a depiction of the scales that Virgo held.

Libra from the Latin (Libra the Scales), translated to the Greek (Zygos the Scales)

Note- the Greeks knew these stars as Chelae the Claws, and frequently saw them as part of a twofold sign, Skorpios the Scorpion. We can assume that the Greeks acknowledged that the sign stood for a set of scales because the Greek translation came from the translated Sumerian (Zib.ba.anna the Heavenly Weighing Scales), which was adapted and translated to the Akkadian (Zibanitu the Scales).