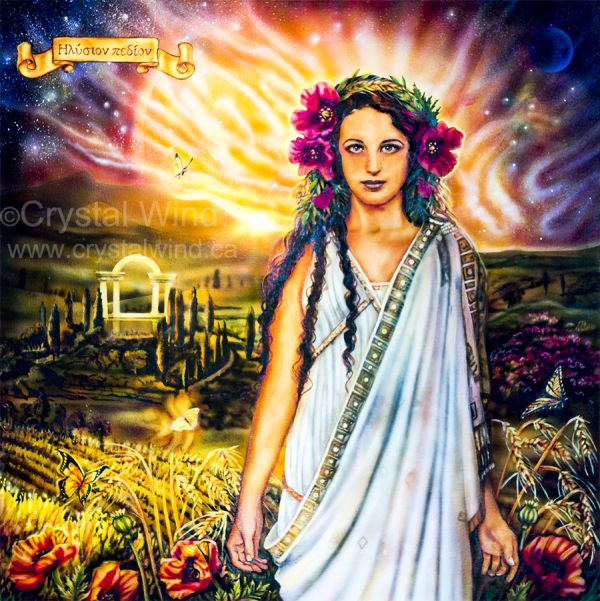 Also known as the Roman goddess Ceres, Demeter was the goddess of the harvest and was credited with teaching humans how to grow, preserve, and prepare grain. Demeter was thought to be responsible for the fertility of the land.

She was the only one of the Greek goddesses who was involved on a day-to-day basis in the lives of the common folk. While others occasionally "dabbled" in human affairs when it suited their personal interests, or came to the aid of "special" mortals they favored, the goddess Demeter was truly the nurturer of mankind.

Demeter also was the only one of the Greek goddesses who could truly empathize with the human experience of suffering and grief, having experienced it fully herself.

The goddess Demeter is best known for her fierce defense of her daughter, Persephone, who was also known as the child, Kore (or Cora). Persephone's father was Zeus, the mighty ruler of the Olympians. The goddess Demeter had been one of his early consorts, long before his marriage to Hera.

Persephone was an obedient, cheerful girl who had a happy childhood, playing with her cousins, Artemis and Athena. Reaching adolescence, she was carefree and spirited, often dancing playfully and picking wildflowers in the meadow near her home.

Persephone's youthful beauty drew the attention of Hades, the god of the underworld, and he could not help falling in love with her. One day as Persephone reached over to pick a flower, the earth opened and the arm of Hades reached up from the underworld.

And so Hades abducted her, dragging her back to his kingdom.

Hearing Persephone's screams, the goddess Demeter rushes to the meadow, but cannot find Persephone. Carrying a torch, Demeter traveled the world day and night, never eating or resting, searching futilely for her daughter. 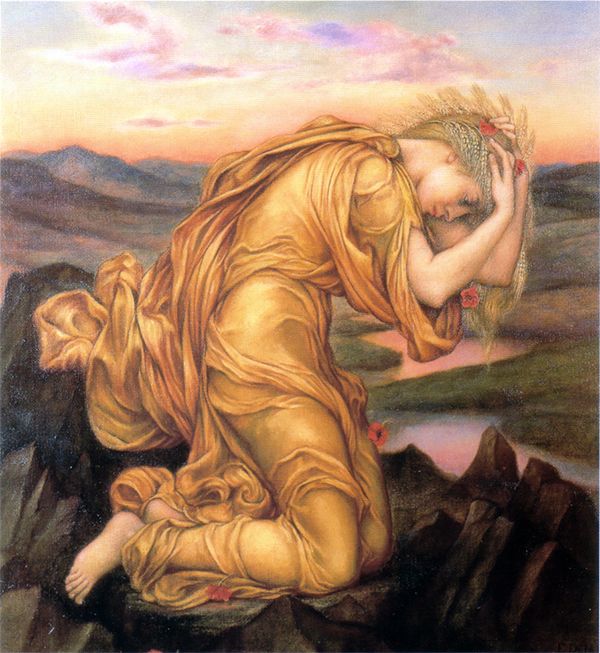 Poseidon, god of the sea, noticed the goddess Demeter as she traveled and pursued her with amorous intent. Then Demeter tried to fool him by changing herself into a mare and hiding herself in the middle of a herd of horses, but he was not fooled. Poseidon saw through Demeter's disguise, turned himself into a stallion, and took her at his will.

When Demeter continued her journey in search of her daughter, she met an old and poor man who was gathering firewood who invited her to return to his home to eat supper with his family and to rest on her journey. When she told him that she was searching for her daughter, he wished her success and told her that he understood her suffering since his son lay dying at home. Demeter, goddess of compassion, changed her mind and went with the kindly man, stopping only once to gather some poppies by the path. Entering his humble home, Demeter went straight away to the boy's bedside and kissed the boy lovingly on the cheek. Immediately the pallor left his face and his breathing eased, as Demeter's love had restored the son to full health.

Although it was the custom of the Greek goddesses and gods to become very vindictive toward anyone who failed to honor them in a dignified fashion, Demeter was such a kind goddess that she seldom utilized this privilege. One of the few times was when she stopped on her travels to quench her thirst by drinking from a spring and heard a man named Ascaelabus laughing at the sound of her gulping the fresh water. Embarrassed, and angry at the man for being so rude, Demeter turned him into a lizard.

Resuming her search, she soon encountered Hecate, goddess of the crossroads, who advised her to speak with Helio, goddess of the sun . . . reasoning that, since she had been riding her chariot (the sun) through the sky that day, she had surely seen what had happened to Persephone. Helio told the goddess Demeter what she had seen and that Persephone was now ensconced as Hades' wife and Queen of the Underworld. She also gave her the shocking news that Zeus himself had sanctioned the marriage, giving Hades permission to abduct Persephone.

Understandably, the goddess Demeter felt betrayed. Renouncing her divine duties that included bringing fertility to the land, Demeter left Mount Olympus swearing that the earth would remain barren until her daughter was returned to her. She took refuge in the city of Eleusis. Disguised as an old woman, the goddess Demeter was met the city ruler’s two young daughters at the well, and they, liking her immensely, invited her to return to their home to meet their mother. There she met their mother who was cuddling her infant son. This must have stirred Demeter's longing for her abducted daughter horribly. Demeter became profoundly depressed, almost catatonic, eyes gazing off into the distance and unwilling or unable to even speak.

Everyone tried to all that they knew to cheer their guest; but it was to no avail. Eventually one of the household servants, a middle-aged maid named Baubo, came and sat in front of Demeter and started talking, mostly making humorous comments (most likely of the "male-bashing" sort), some of them quite risqué. Encouraged when she saw the beginnings of a smile forming on Demeter's grief stricken face, Baubo hiked up her skirt and "mooned" the goddess. Demeter responded with a deep belly laugh that brought her out of the deep depression. Her good nature now restored, Demeter was soon hired to work as a nursemaid to the infant son of the city's ruler.

Caring for him lovingly, feeding him on the nectar and ambrosia of the gods, Demeter grew very attached to the young Demophoon and decided to make him immortal. But, just as Demeter was holding his feet over the fire (the ritual which would transform him into an Olympian god, Demophoon's mother entered the room.

Mistakenly believing that Demeter was about to burn her son, she began to scream. The goddess Demeter then dropped her disguise, revealing the beautiful goddess that she truly was, and berated the mother for her stupidity in stopping the ritual that would have given her son immortality.

In addition, Demeter demanded that a temple be built in her honor. This was done, and the goddess Demeter remained there, sitting alone in the darkness, once again depressed and grieving for her lost daughter.

All this time, with the goddess Demeter refusing to function, the land grew barren and the harvests ceased . . . the earth saw a winter that did not end. Zeus finally opens his eyes to what was happening and sent messengers to apologize and coax the goddess Demeter to return.

Demeter, however, remained adamant that she would not return until Persephone was rescued. Finally, Zeus gave in and sent Hermes to command Hades to release Persephone.

Persephone, upon hearing the news, rejoiced for she had missed her mother sorely. As she was leaving, Hades offered her a pomegranate to eat. Persephone had refused all food while she had been in the underworld, and was surely hungry.

Although she undoubtedly knew that those who ate anything in the underworld were not allowed to return to the earth, Persephone accepted Hades' gift, eating only the seeds. Hermes borrowed Hades chariot and stallions and flew Persephone home to her mother as Zeus had ordered.

Demeter was not pleased that Persephone had eaten the pomegranate seeds and would have to return to the underworld for four months during each year, but was otherwise overjoyed to be reunited with her daughter.

Happily, Demeter resumed her divine duties and restored the fertility of the earth. Each year the goddess Demeter longs for her absent daughter and withdraws her favors from the earth for a period we know as winter, but Persephone returns each spring to end her desolation.

Once Persephone was safely returned, albeit for only a third of a year, the Greek goddess Demeter decided to reside in her temple in Eleusis where she had enjoyed the welcome and support of her friends during her long search for Persephone.

There she developed the Eleusian mysteries, a series of profound religious ceremonies that taught her initiates how to live joyfully and how to die without fear.

The story of Greek goddess Demeter illustrates the tremendous capacity of a woman to love and nurture, within her own family and the world at large.

It also reminds us to stand firm for what is good and right, even in the face of adversity, when powerful forces are aligned against us.

The goddess Demeter's message also reminds us of the seasons of a woman's life, that even though there are times of great sorrow there is also great joy to be found. 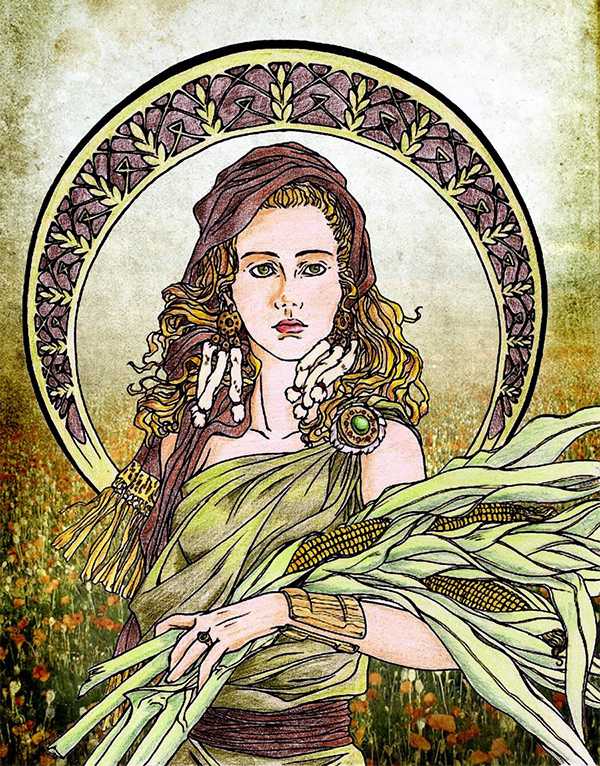 Demeter (also known as the goddess Ceres) is often represented by symbols associated with her incredible generosity. It is not surprising that many of our icons representing a bountiful harvest originated with the ancient goddess symbols of Demeter.