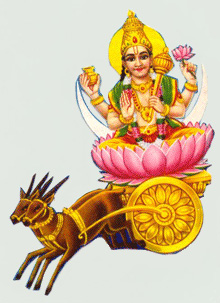 Soma / Chandra, God of the Moon

Chandra was the original Indian god of the moon who was later merged with Soma. He was white in color, and drove the moon chariot across the sky with ten white horses. He was also a fertility god, for the dew which fell on the plants overnight and gave them life was seen as coming from the moon. Chandra was also prayed to when a couple wanted to have a child. He is sometimes called the father of Budha and Tara is named as one of his consorts.

Soma is a very difficult deity for many outside of India to comprehend. He works on numerous levels, all of which are tied together rather strangely. Soma is firstly a plant. He is also an intoxicating drink which was brewed from that plant. As the blood of animals and the sap of plants, Soma courses through all living things. He is Inspiration to those who seek it, and so is the god of poets. He is also the god of the moon. He is the dwelling place of the venerated dead, as well as the divine cure for evil. The ancient Hindus did not differentiate between these divergent aspects; all were the god Soma.

Soma was one of the more important gods in the Rig Veda; 120 hymns and one entire book are dedicated to him. He has many different forms. He is seen as a celestial bull, a bird, a giant rising from the waters, the lord of plants, and as an embryo. He rarely is seen as a fully grown human.

As a drink, Soma is the ambrosia of the gods. It was due to this influence that they could rise above all obstacles to achieve their goals. Indra was a great drinker of the substance; before his confrontation with Vritra, he drank rivers of it to gain the strength needed to overcome the fearsome dragon. Agni also consumed it in large amounts. Soma was what gave the Vedic gods their immortality. It was also a drink for mortals, a golden-hued nectar which was derived from the Soma plant, which may be a species known as ephedra vulgaris to botanists. This drink brought hallucinations and ecstasy to those who consumed it. It helped warriors to overcome their fears in battle, and it helped poets to become inspired to create. Soma was a bridge between the mortal world and that of the gods. This drink is the same as Haoma in Persian mythology.

As the moon, Soma became equated with the god Chandra, who originally was the moon deity. The moon was considered the cup which held the drink Soma for the gods, and one reason that the moon waxed and waned was due to this fact. When the moon waned, it was because the gods were drinking down all the Soma; as it waxed, the god was re-creating himself, only to be consumed again once the cup was again full. As the Vedic age ended and the Brahmans asserted themselves, the power of the gods no longer came from Soma but instead from sacrifices made by humans; Soma came more and more to be just a god of the moon. In later times, the waxing and waning of the moon was due to a curse put on Soma. Soma had twenty-seven wives (who correspond to the twenty-seven stations of the moon). They were all the daughters of Daksha. Daksha felt that Soma was paying too much attention to one of his daughters, thereby neglecting the rest. He cursed Soma to die a withering death. But Soma's wives intervened, and so the death became only periodic; during half the month, the moon slowly dies away, but is reborn and comes around again to full vigor.

Though he is never depicted in human form, Soma obviously did not want for lovers; poets rarely do. In one episode, his desires caused a war. He had grown arrogant due to the glory that was offered him. Because of this, he let his lust overcome him; he kidnaped and carried off Tara, the wife of the god Brihaspati. After refusing to give her up, the gods made war on him to force her release, and Soma called on the asuras to aid him. Finally Brahma interceded and compelled Soma to let Tara go. But she was with child, and it ended up that this child was Soma's. The child was born and named Budha (not to be confused with the Buddha). 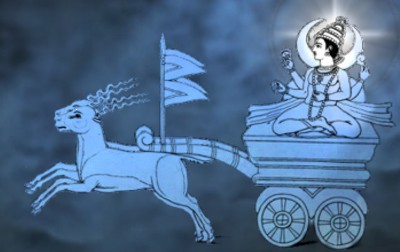 Chandra or moon is a Hindu deity who is also known as, Soma. The `Soma` means juice or sap of the plants and thus Chandra is the lord of plants and vegetation. Chandra is also considered as the Graha or planet according to Hindu astrology.

In Puranas (ancient Hindu legends), Chandra is described as a young, beautiful, fair, two-armed god who has a club and a lotus in his hands. He rides a chariot pulled by ten white horses or an antelope and moves around the sky at night. The other names of moon are Rajanipati (lord of night), Indu (the brighten drop) and Kshuparaka (one who illuminates the night).

Chandra has many wives namely Tara, Rohini, Anuradha and Bharani, who are the twenty-seven Nakshtras (constellations) and daughters of Daksha. Budh (planet Mercury) is the son of Chandra and Tara.

As Soma, Chandra presides over Somvar or Monday. Worshipping Chandra god on Mondays is very effective as it grants one`s prayer. Chandra is also considered a fertility god since the dews that fall on plants overnight giving them life, seem to come from moon. Thus Chandra is prayed to when a couple wants to have a child.

As a `Graha` Chandra helps to get relief from the sorrows and cure mental afflictions. According to Puranas, Chandra is thought to adore the head of Lord Shiva. Sages and devotees invoke the Goddess mother in Chandra and meditate for hours.