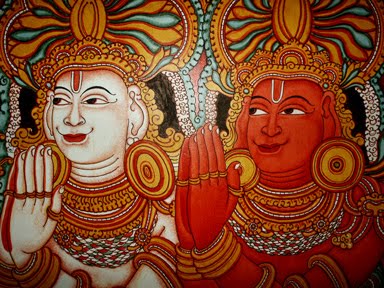 The Aswins are the twin sons of Surya, the sun god, and are horsemen born of a nymph who turned herself into a mare to seduce Surya. Like their father, Surya, the Aswins are also associated with celestial lights. They are said to be the harbingers of Usha, the dawn, and they precede Usha each morning in their golden chariot drawn by birds. In this aspect they are revered as the twin gods of morning. The Aswins are represented as young and handsome, agile and brilliant. They were worshipped quite enthusiastically in the Vedic period in Indian history for their famed ability of bestowing youth upon men. They were also known as being physicians to the gods.

There are many tales told of the Aswins' benevolence to men. One such tale, which narrates how the twins gained entry to the ranks of the immortals, is told here.

Chyavana was a very old sage. His body was decrepit, shriveled and hideous to look at. One day, he was lying resting by his hut by the woods when some boys came by on their way to bathe in a pool nearby. On seeing Chyavana's ugly, ancient body they started making fun of him and, eventually, started throwing clods at him. Chyavana was incensed at this and resolved to put a terrible curse on the boys. On hearing this, the boys' father rushed to the old sage's abode and hastened to appease him with the hand of his daughter, Sukanya, in marriage. The old man was mollified and, after the marriage, settled down into his new life as a husband.

One day, the Aswins came by the old man's abode by the woods. Being of flirtatious nature, one of them started to seduce Sukanya, who was young and pretty. He started with commiserating with her on the condition of her husband's physique. Sukanya, though miserable at being wed to such an old husband, was nevertheless faithful and refused to respond to the Aswin's advances. Chyavana, though extremely old, still had his wits about him and was shrewd enough to realize what was going on. He decided to capitalize on the situation. He devised a plan whereby he could get the twins to bestow youth upon him. He prompted Sukanya to taunt the twins by telling them that they were incomplete in one aspect. The vain young men were affronted at this and anxiously asked Sukanya what it was that made them incomplete. She promised to tell them on condition that they restore her husband's youth. The twins acceded to this bargain and, accordingly, instructed Chyavana to go and bathe in a certain pool in the nearby woods. Chyavana did as the twins told him to and came back with his youth restored. Sukanya was overjoyed at this transformation in her husband.

Then, when the twins asked her what it was that made them incomplete, she told them that they were incomplete because they had not been invited to drink soma (a celestial drink that made the drinker immortal) at a party Indra, the king of the gods, was throwing at his heaven, Baikunth. Feeling insulted by this, the proud twins rushed to Baikunth and asked to be given access to the feast. Indra refused, saying that they associated with mortals and assumed whatever forms that pleased them. Enraged at this affront to their pride, the twins hastened back to Chyavana to seek his advice in avenging this indignity.

Chyavana was wily and started to perform a sacrifice to the Aswins. This enraged Indra, who did not acknowledge the Aswins as gods worthy of offering sacrifice to, and he rushed out of Baikunth to attack Chyavana with a mountain in one hand and his customary thunderbolt in the other. Chyavana was not intimidated at this and retaliated by creating a monster, Mada, who had enormous teeth and jaws so huge that one could engulf the entire earth while the other could swallow the heavens. When Mada was about to swallow the entire universe with all the gods in it Indra succumbed and asked Chyavana to withdraw Mada. Chyavana agreed to do this on condition that the god allowed the Aswins to participate in his feast.

The bargain was kept by both sides and this is how the Aswins were invited to Indra's feast at Baikunth and allowed to drink soma and become immortals.

We have 730 guests and no members online