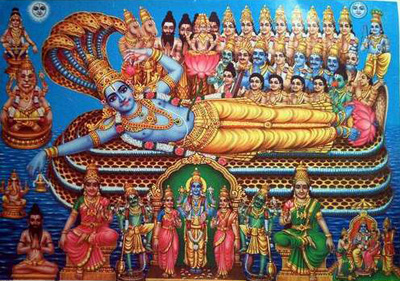 This is not the first world, nor is it the first universe. There have been and will be many more worlds and universes than there are drops of water in the holy river Ganges. The universes are made by Lord Brahma the Creator, maintained by Lord Vishnu the Preserver and destroyed by Lord Shiva. Since the universes must be destroyed before they can be recreated, Lord Shiva is called the Destroyer and Re-creator. These three gods are all forms of Supreme One and part of the Supreme One. The Supreme One is behind and beyond all.

After each old universe is destroyed nothing is left but a vast ocean. Floating on this ocean, resting on the great snake Ananta, is Lord Vishnu. Some say that a lotus flower springs from his navel and from this comes Lord Brahma. And it is from Lord Brahma that all creation comes.

“Darkness was hidden by darkness in the beginning. With no distinguishing sign, all this was water. The life force was covered with emptiness. That One arose with the power of heat.”

How dies Lord Brahma create? Some tell of how he grows lonely and splits himself in two to create male and female. Then he becomes one again and human beings are created. In the same way he creates all the other living things, from the great animals to the tiniest insects. Others say that everything comes from different parts of Lord Brahma's body. All the different animals and all the people come from his mouth, arms, thighs and feet. Everything comes from one - Lord Brahma, who is part of the Supreme One - so everything is part of the Supreme One. For this universe, this world and this Lord Brahma, like all those before and all those to come, will be destroyed by Lord Shiva.

How long is the life of a universe? Its length is beyond imagination. One day to Lord Brahma is longer than four thousand million of the years that we know. Every night when Lord Brahma sleeps the world is destroyed. Every morning when he awakes it is created again. When the Lord Brahma of this universe has lived a lifetime of such days the universe is completely destroyed by Lord Shiva.

“Desire upon That One in the beginning. That was the first seed of mind. Poets, seeking in their hearts with wisdom, found the bond of existence in non-existence. Their cord was extended across. Was there below? Was there above?”

Everything disappears into the Supreme One. For an unimaginable period of time chaos and water alone exist. Then once again Lord Vishnu appears, floating on the vast ocean. From Lord Vishnu comes forth Lord Brahma of the new universe and the cycle continues for ever.

This belief in reincarnation, in the cycle of life, strongly influences the lifestyle of many Hindus. It can best be explained by the terms 'dharma' and 'karma'. Dharma may be translated as 'duty' and for Hindus, part of that duty is to respect and care for all living things. The belief that after death we are reborn in another body, not necessarily human, leads to a great respect for all life and results in many cases of vegetarianism. Karma is the result or product of what we do. If we do our duty, then we create good karma, since the next life we may have is directly related to the actions of our present life. To the Hindu, everything is part of the Supreme One, and thus every living thing is equally important in the great cycle of life.

“Who really knows? Who here proclaim it? Whence was it produced? The gods came afterwards. Who then knows whence it has a reason. Perhaps it formed itself or perhaps it did not. The One who looks down upon it in highest heaven, only he knows, or perhaps he does not know?” 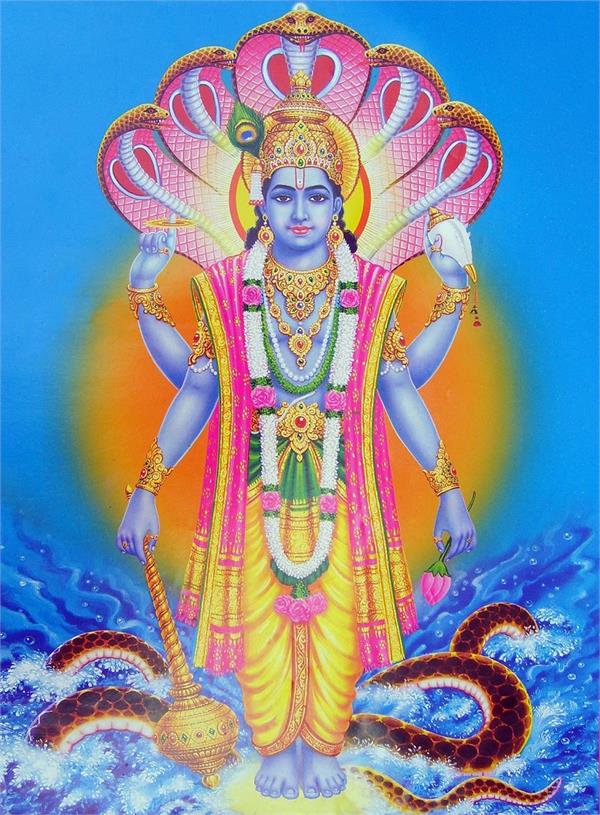 Before this time began, there was no heaven, no earth and no space between. A vast dark ocean washed upon the shores of nothingness and licked the edges of the night. A giant cobra floated on the waters. Asleep within its endless coils lay the Lord Vishnu. He was watched over by the mighty serpent.

Everything was so peaceful and silent that Vishnu slept undisturbed by dreams or motion. From the depths a humming sound began to tremble, Aum. It grew and spread, filling the emptiness and throbbing with energy.

The night had ended, Vishnu awoke. As the dawn began to break, from Vishnu’s navel grew a magnificent lotus flower. In the middle of the blossom sat Vishnu’s servant, Brahma. He awaited the Lord’s command. Vishnu spoke to his servant: ‘It is time to begin.’ Brahma bowed. Vishnu commanded: ‘Create the World.’ A wind swept up the waters. Vishnu and the serpent vanished.

Brahma remained in the lotus flower, floating and tossing on the sea. He lifted up his arms and calmed the wind and the ocean. Then Brahma split the lotus flower into three. He stretched one part into the heavens. He made another part into the earth. With the third part of the flower he created the skies.

The earth was bare. Brahma set to work. He created grass, flowers, trees and plants of all kinds. To these he gave feeling. Next he created the animals and the insects to live on the land. He made birds to fly in the air and many fish to swim in the sea. To all these creatures, he gave the senses of touch and smell. He gave them power to see, hear and move.

The world was soon bristling with life and the air was filled with the sounds of Brahma’s creation.