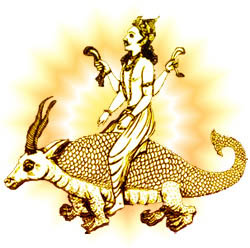 Varuna, The God of Oceans

Though he only has about a dozen hymns addressed to him in the Rig Veda, Varuna seems to be one of the most important of the Vedic gods. In pre-Vedic times, he was the supreme lord of the cosmos, the keeper of divine order, the bringer of rain, the enforcer of contracts. He is called omnipotent and omniscient; he is responsible for the sun to move in the sky, for day and night to stay separate, and for the earth to keep its form; he watches the flight of every bird, is present at every gathering, and knows every thought.

His name means "he who covers", and this probably refers to the sky. Varuna is the keeper of the cosmic order, a force called rta. It is rta which keeps everything working as it should, and Varuna's role as the one who governs rta makes him very important indeed. He is very closely linked to the god Mitra. Varuna is one of the Adityas and considered to be an asura, when those beings were still god-like and had not yet degenerated into demons. He is also associated with the moon and Soma, in Soma's incarnation as the drink of the gods. Varuna is seen as a white man in golden armor riding a Makara (a sea monster), holding a noose or lasso made from a snake.

Varuna is the keeper of the celestial waters, those which flow from the openings in the sky in the form of rain. He was worshiped with veneration and a healthy amount of fear, for as an asura Varuna did have his sinister aspects and was known to punish mortals who did not keep their word. He was the cosmic hangman and his usual method of punishment was to capture the offender with his noose. He was also a lord of the dead, a position he shared with Yama, and could confer immortality if he so chose.

In Vedic times, the worship of Varuna fell off as he was supplanted by Indra as king of the gods. One possible reason for this may go back to Indra's most famous exploit. When Vritra stole all the waters of the universe, the waters which Varuna was in charge of, it was Indra who had to fight the demon and get them back. It may have been because of this that Indra was able to supplant the overlordship of Varuna and become lord of the gods himself. Varuna then became god of the oceans and rivers; still important, but with hardly the grandeur he once had. The souls of those who drowned went to him, and he was attended by the nagas.

Varuna faded away with the ascendancy of Shiva and Vishnu. His lofty position may have lived on, however, for he may be the same as the Zoroastrian supreme god Ahura Mazda.

Lord Varuna, according to the Indian Puranas, is said to be the son of sage Kashyapa. He is one of the twelve gods acknowledged as Adityas because of their origin from Aditi, the mother of gods. Varuna is correlated to possess the lordship of the waters. According to mythologies, the gods went to Lord Varuna and prayed him to look after the clouds and rains. Thus he came to be known as the king of waters. Lord Varuna took under his control all rivers, streams, lakes, oceans and other reservoirs of water.

Lord Varuna is considered to be present in the whole world. He is among one of the oldest Vedic deities. The lord is embodiment of the sky and he is associated with clouds, water, rivers, and ocean. In addition to that he is considered to be the sustainer of live by providing rain and crops. According to the Puranas he has thousand eyes and oversees the whole world. Hindus worship the lord in different forms. A few temples of the Indian subcontinent depicted him as riding on a crocodile. However, he is pictured as riding in a chariot drawn by seven swans and holding the lotus, noose, conch and a vessel of gems as well as with an umbrella held over his head. Certain Hindus associate him as a God carrying a serpent.

Lord Varuna is also considered as a god of law and the underworld. He possesses the aspects of a solar deity. However he is rather associated with night. He is concerned with moral and community affairs than being a deity of adoration. In the Vedas Lord Varuna is portrayed as omniscient and omnipotent. Varuna can also capable of granting immortality. He is the guardian of the western direction. Lord Varuna`s worship is considered as the vital part of the ritual of Sandhyavandanam. He is also associated with the moon planet too.

A legend associated with the festival of Rakhi is that of the worship offered to the sea god, Lord Varuna in Western India. On the Raksha Bandhan day devotees make offers of coconut to him. Varuna is considered as one of the Adityas.