The Elohim - Builders of Form 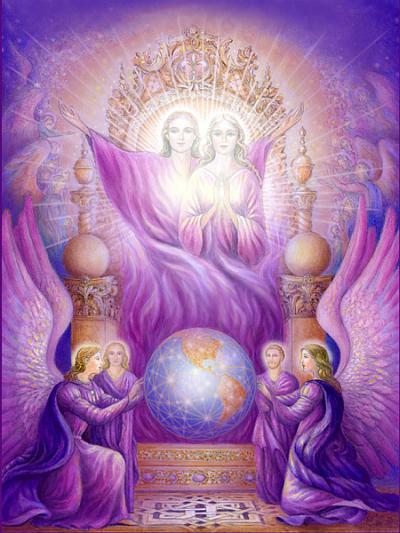 "ELOHIM" is a Hebrew word meaning "God" - used 2,500 times in the Old Testament. It is a uni-plural noun that refers to the Twin Flames of the Godhead - the "Divine Us" Who "in the beginning" (Gen. 1:1) created male and female in Their image and likeness (Gen. 1:26, 27). The Elohim embody the Light of the Father-Mother God, whom They personify on each of the Seven Rays.

These Seven Sets of Twin God-Flames: are the "Seven Spirits of God" referred to in Revelation 1:4; 3:1; 4:5; 5:6. 3 The Elohim are also the "Morning Stars" that sang together in the Beginning, as revealed by the LORD in the Book of Job.

There are five Elohim who surround the white-fire core of the Great Central Sun. They represent Mighty Cosmos’ five ‘secret rays’ and the corresponding ‘secret-ray’ chakras.

The Elohim and Cosmic Beings carry the greatest concentration of Light that we can comprehend in our state of evolution. Elohim is a Hebrew word that may be derived from the words meaning powerful, strong and foremost. In other words, the name Elohim expresses the fullness of God’s power. In the Bible, God, in his role as the Creator who rules the affairs of men and controls nature, is known as Elohim.

Elohim step-down Energies of Alpha and Omega: Beginning in the heart of the Great Central Sun, hierarchy manifests as the stepping-down of the energies of Alpha and Omega, of the sacred AUM, of the I AM THAT I AM. At this central point that is the fiery focal point for the whole of creation, the Elohim step down the energies. The twelve Elohim together with the four beings of nature, their consorts, and the elemental builders of form represent the power of the Creator.

Coming out from the Great Central Sun, the Elohim have earned the right through concentration of energy, of consciousness, of awareness of God, to be the step-down transformers. They step-down the sacred fire for lesser evolutions who have not passed their initiations required for them to contain such a concentrated manifestation of light.

A cosmic being is one who is aware of self as cosmos, who can ensoul a cosmos and the control of vast energy fields beyond our ability to even comprehend. The term “cosmic being” is a title, not just a description. At this central point surrounding Alpha and Omega, are these cosmic beings and the twelve solar hierarchies that we know by the names of the signs of the zodiac.

Within these hierarchies are mandalas of cosmic beings there could contain at its nucleus 144,000 more cosmic beings acting as step-down transformers for the flame that is released from the heart of Alpha and Omega for each one of those twelve zodiac solar hierarchies.

As the twelve hierarchies step-down the twelve parts, other hierarchies break these down as the energies are individed over and over again. As each frequency is stepped down, other virtues are borne by other lifestreams, by separate ascended masters, angels, and archangels. In the hierarchy of heaven, all have their place and function.

The retreats of the Elohim are the Father's houses in heaven. "In my Father's house are many mansions: if it were not so, I would have told you. (John 14:2). The seven centers are focuses of the seven rays, centers of great light. Each retreat is a forcefield of light that serves to act as a “step-down transformer,” for the higher vibrations of the Great Central Sun to earth’s evolutions.

"Beginning in the Heart of the Great Central Sun, Hierarchy manifests as the stepping-down of the Energies of Alpha and Omega, of the Sacred AUM, of the I AM THAT I AM that is the Fiery Focal Point for the whole of creation, the whole of the cosmos. The Elohim and Cosmic Beings carry the greatest concentration, the highest vibration of Light that we can comprehend in our state of evolution.

"The Seven Mighty Elohim and Their Divine Complements, their Feminine Counterparts, are the Builders of Creation. It was They who responded to the Fiat of the Lord God 'Let there be Light: and there was Light' and the Fiat of Creation to create the worlds. . . . "

" . . . . The Seven Elohim are mighty Beings of Love and Light Who responded to the invitation of the Sun of this System and offered to help to manifest the Divine Idea for this System, created in the Minds and Hearts of our Beloved Helios and Vesta — God and Goddess of our physical Sun Itself. Through ages of time, the Elohim have learned how to successfully use the creative powers of thought, feeling, spoken word and action as God intended them to be used from the beginning and, in cooperative endeavor, the Elohim drew forth our entire System in perfect manifestation, of which System the Earth is just one small planet.

Upon the Earth today, one of the great requirements of the Lifestreams evolving here is to raise them out of human limitation, which mankind have drawn upon themselves by the forgetfulness of their Source, Its Divine Plan of Perfection for them and how to fulfill that Plan. The only way to permanently raise any lifestream out of limitation of any kind is to teach him how to transmute his "old" causes of distress by the use of the Violet Flame and then set into action new causes (mostly invisible) which will create new effects for him in this physical appearance world, expressing as opulence, peace, good health, wisdom — on and on — ad infinitum. No type of subsidy and no means of security is ever permanent until it flows forth from the consciousness of the individual himself; because the gifts from any other members of the race are the effects of the benefactors' consciousness and, thus, only temporarily loaned to the beneficiary.

"So, to enrich the consciousness of the individual until he becomes Master of his own energy within himself and learns to create causes which will manifest as these constructive effects, the Elohim graciously have chosen to present to mankind the Science — the way and means — by which They achieved the manifestation of our Solar System.

"Call to these Great Elohim in all the sincerity of your hearts! Daily invoke Their Light and Understanding to come into your own consciousness! . . . ." El Morya, 1957 U.S.A.

The Elohim of the First Ray, Hercules and Amazonia, have said because of their office among the Seven Elohim, Hercules is the only representative of the Godhead who can stand between mankind and their returning karma. He said wherever there is cataclysm, flood, fire, storm or drought to call unto him, that he may intercede with the great power that God has given him. And to call on the name of Hercules, day and night for his mighty assistance.

The Elohim of the Second Ray, Apollo and Lumina, bring the power of Wisdom. Apollo and Lumina want us to focus on education and the quickening of the Mind of God within the children of the Light on earth.

The Elohim of the Third Ray, Heros and Amora, Heros and Amora come to help us defeat of all the forces of anti-love that oppose the union of twin flames and our union with our Higher Self.

The Elohim of the Fifth Ray, Cyclopea and Virginia assist mankind and the elementals to precipitate the abundance of God into form. They can help us to focus on our divine blueprint as well as on the following issues: the healing of the nations, their economies and their peoples; the halting of misuses of music, science and technology, including genetic engineering and cloning; and the counteracting of germ warfare and the spreading of harmful viruses and microbes.

The Elohim of the Sixth Ray, Peace and Aloha help us focus on peace and brotherhood. We made implore them to help us turn back war and the forces of anti-peace both within and without ourselves.

The Elohim of the Seventh Ray, Arcturus and Victoria bring the violet flame and its power of transmutation. They can help us focus this violet flame healing into all fanaticism; all physical, emotional, mental and etheric pollution; and all that opposes the soul’s one-on-one relationship with God.

We have 737 guests and no members online