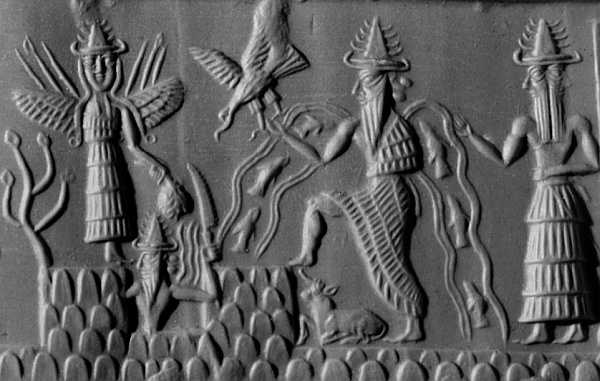 Events Before the Deluge

450,000 years ago
On Nibiru, a distant member of our solar system, life faces slow extinction as the planet's atmosphere erodes. Deposed by Anu, the ruler Alalu escapes in a spaceship and finds refuge on Earth. He discovers that Earth has gold that can be used to protect Nibiru's atmosphere.

445,000
Led by Enki, a son of Anu, the Anunnaki land on Earth, establish Eridu -Earth Station I - for extracting gold from the waters of the Persian Gulf.

416,000
As gold production falters, Anu arrives on Earth with Enlil, the heir apparent. It is decided to obtain the vital gold by mining it in southern Africa. Drawing lots, Enlil wins command of Earth Mission; Enki is relegated to Africa. On departing Earth, Anu is challenged by Alalu's grandson.

400,000
Seven functional settlements in southern Mesopotamia include a Spaceport (Sippar), Mission Control Center (Nippur), a metallurgical center (Shuruppak). The ores arrive by ships from Africa; the refined metal is sent aloft to orbiters manned by Igigi, then transferred to spaceships arriving periodically from Nibiru.

380,000
Gaining the support of the Igigi, Alalu's grandson attempts to seize mastery over Earth. The Enlilites win the War of the Olden Gods.

300,000
The Anunnaki toiling in the gold mines mutiny. Enki and Ninhursag create Primitive Workers through genetic manipulation of Ape woman; they take over the manual chores of the Anunnaki. Enlil raids the mines, brings the Primitive Workers to the Edin in Mesopotamia. Given the ability to procreate, Homo Sapiens begins to multiply.

200,000
Life on Earth regresses during a new glacial period.

13,000
Realizing that the passage of Nibiru in Earth's proximity will trigger an immense tidal wave, Enlil makes the Anunnaki swear to keep the impending calamity a secret from Mankind. 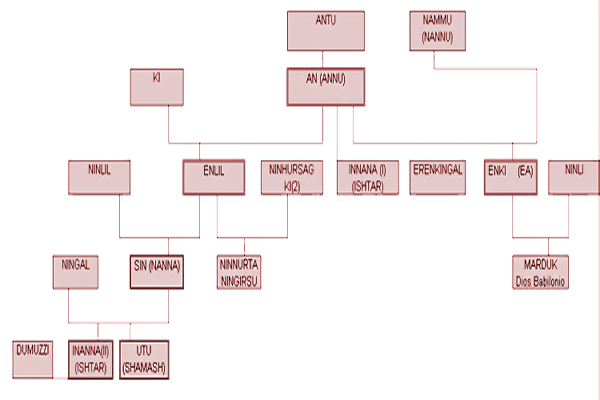 Events After the Deluge

11,000 B.C.
Enki breaks the oath, instructs Ziusudra/Noah to build a submersible ship. The Deluge sweeps over the Earth; the Anunnaki witness the total destruction from their orbiting spacecraft.

Enlil agrees to grant the remnants of Mankind implements and seeds; agriculture begins in the highlands. Enki domesticates animals.

10,500 B.C.
The descendants of Noah are allotted three regions. Ninurta, Enlil's foremost son, dams the mountains and drains the rivers to make Mesopotamia habitable; Enki reclaims the Nile valley. The Sinai Peninsula is retained by the Anunnaki for a post-Diluvial spaceport; a control center is established on Mount Moriah (the future Jerusalem).

8,670 B.C.
Opposed to the resulting control of all the space facilities by Enki's descendants, the Enlilites launch the Second Pyramid War. The victorious Ninurta empties the Great Pyramid of its equipment.

Ninhursag, half-sister of Enki and Enlil, convenes peace conference. The division of Earth is reaffirmed. Rule over Egypt transferred from the Ra/Marduk dynasty to that of Thoth. Heliopolis built as a substitute Beacon City.

8,500 B.C.
The Anunnaki establish outposts at the gateway to the space facilities; Jericho is one of them.

3,800 B.C.
Urban civilization begins in Sumer as the Anunnaki reestablish there the Olden Cities, beginning with Eridu and Nippur.

Anu comes to Earth for a pageantful visit. A new city, Uruk (Erech), is built in his honor; he makes its temple the abode of his beloved granddaughter Inanna/lshtar. 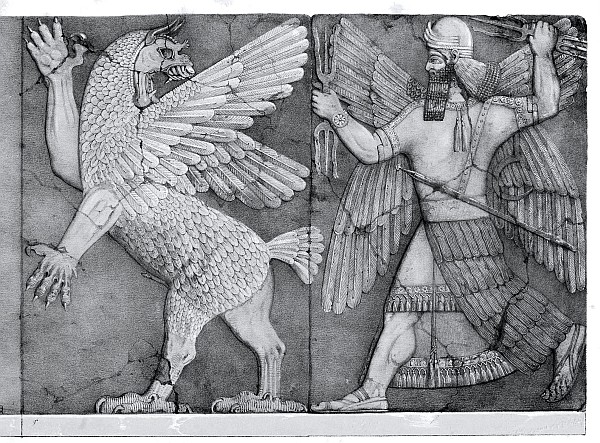 3,760
Mankind granted kingship. Kish is first capital under the aegis of Ninurta. The calendar begun at Nippur. Civilization blossoms out in Sumer (the First Region).

3,450
Primacy in Sumer transferred to Nannar/Sin. Marduk proclaims Babylon "Gateway of the Gods." The "Tower of Babel" incident. The Anunnaki confuse Mankind's languages.

3,100-3, 350
Years of chaos end with installation of first Egyptian Pharaoh in Memphis. Civilization comes to the Second Region.

2,900
Kingship in Sumer transferred to Erech. Inanna given dominion over the Third Region; the Indus Valley Civilization begins.

2,316
Aiming to rule the four regions, Sargon removes sacred soil from Babylon. The Marduk-Inanna conflict flares up again. It ends when Nergal, Marduk's brother, journeys from south Africa to Babylon and persuades Marduk to leave Mesopotamia.

2,291
Naram-Sin ascends the throne of Akkad. Directed by the warlike Inanna, he penetrates the Sinai peninsula, invades Egypt.

2,193
Terah, Abraham's father, born in Nippur into a priestly-royal family.

2,180
Egypt divided; followers of Ra/Marduk retain the south; Pharaohs opposed to him gain the throne of lower Egypt.

2,130
As Enlil and Ninurta are increasingly away, central authority also deteriorates in Mesopotamia. Inanna's attempts to regain the kingship for Erech does not last. 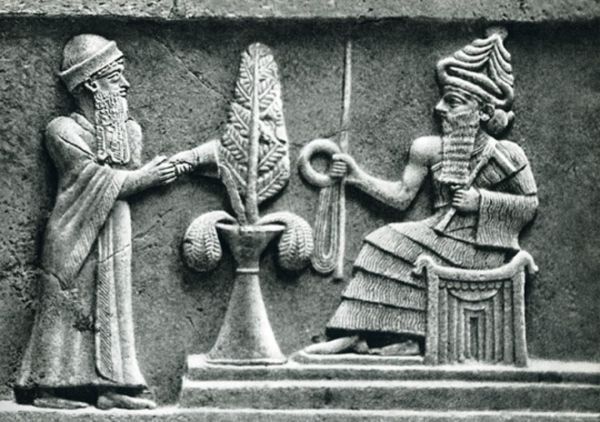 2,113
Enlil entrusts the Lands of Shem to Nannar; Ur declared capital of new empire. Ur- Nammmu ascends throne, is named Protector of Nippur. A Nippurian priest - Terah, Abraham's father - comes to Ur to liaison with its royal court.

2,096
Ur-Nammu dies in battle. The people consider his untimely death a betrayal by Anu and Enlil. Terah departs with his family for Harran.

2,095
Shulgi ascends the throne of Ur, strengthens imperial ties. As empire thrives, Shulgi falls under charms of Inanna, becomes her lover. Grants Larsa to Elamites in exchange for serving as his Foreign Legion.

2,055
On Nannar's orders, Shulgi sends Elamite troops to suppress unrest in Canaanite cities. Elamites reach the gateway to the Sinai peninsula and its Spaceport.

2,048
Shulgi dies. Marduk moves to the Land of the Hittites. Abraham ordered to southern Canaan with an elite corps of cavalrymen.

2,047
Amar-Sin (the biblical Amraphel) becomes king of Ur. Abraham goes to Egypt, stays five years, then returns with more troops.

2,041
Guided by Inanna, Amar-Sin forms a coalition of Kings of the East, launches military expedition to Canaan and the Sinai. Its leader is the Elamite Khedor-la'omer. Abraham blocks the advance at the gateway to the Spaceport.

2,038
Shu-Sin replaces Amar-Sin on throne of Ur as the empire disintegrates.

2,024
Leading his followers, Marduk marches on Sumer, enthrones himself in Babylon. Fighting spreads to central Mesopotamia. Nippur's Holy of Holies is defiled. Enlil demands punishment for Marduk and Nabu; Enki opposes, but his son Nergal sides with Enlil.

As Nabu marshals his Canaanite followers to capture the Spaceport, the Great Anunnaki approve of the use of nuclear weapons. Nergal and Ninurta destroy the Spaceport and the errant Canaanite cities.

2,023
The winds carry the radioactive cloud to Sumer. People die a terrible death, animals perish, the water is poisoned, the soil becomes barren. Sumer and its great civilization lie prostrate. Its legacy passes to Abraham's seed as he begets -at age 100- a legitimate heir: Isaac.

We have 1217 guests and no members online