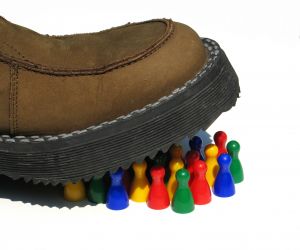 Many of your countries have regularly scheduled elections and you are under the illusion that you are creating a leadership that represents your values and ideals. This is not so. With only a few exceptions, the so-called “elected” leaders have very little to do with leadership of the people. They are also not directly part of the illusion of control, manipulation and domination of the society for that matter. They are merely puppets of the ruling elite, taking their orders from a conglomerate of special interests, lobbyists, and “black operatives” that function outside the budget and control of the elected parties.

Most of the elected leaders have no idea who is in control of the society. They merely do their job, which largely involves getting re-elected, and seldom question what they are doing. As with the various social systems, the political structures will begin breaking down as Earth approaches the zenith of change. Many political scandals will bring to light the corruption that has been there for a very long time, but which has been ignored due to the massive denial of the politicians and the people they are supposed to represent.

The solution, as always, is for each individual within the political system to evolve a greater awareness of the nature of the soul, and to realize that no authority figure is going to save them from themselves. Enlightened individuals create enlightened groups, which in turn create enlightened policies and procedures. That is the only way the political structures of Earth will change for the better. As your teachers have repeatedly stated, change begins within each one of you.

Your social and political structures will likely break down completely before they are rebuilt. There could be a prolonged period of chaos and confusion as the old structures crumble. Many fear-based individuals will resort to violence and other insanities in a vain attempt to protect what they believe is theirs.

In the channel's country (the USA), there could be a second revolutionary period where the working class simply refuses to support the ruling elite anymore. They might choose to stop paying taxes, or abiding by the rules and procedures of the games of the ruling elite. They might form their own systems of currency and stop trading with fiat currency. Some of them might form militias.

As stated numerous times before, the governments of the world are largely controlled by a ruling elite, often called the “Illuminati,” that consists of a small number of individuals and organizations that make decisions affecting most of the world. The original purpose of the Illuminati was to illuminate the hearts and minds of spiritual seekers. Today, only about 10% of its members still uphold that original purpose. The vast majority have become mesmerized by the illusion of power and control. As the world accelerates toward the fourth density, most of the rulers will find it increasingly difficult to maintain the illusion of control. This illusion, like most, requires a great deal of secrecy and denial. Once light shines into darkness, the darkness vanishes, and so the dark enclaves of the Illuminati depend on being anonymous and hidden from the light of scrutiny.

Some of the more enlightened members of the ruling elite are aware that great change is coming. They may or may not understand the spiritual aspects of the change, but they can see that the planet is running out of easily obtainable resources and that the climate is changing.

Some Illuminati operatives have channeled their “black funding” into elaborate schemes designed to protect themselves during the Earth changes. They have built extensive underground tunnels and storage areas, and are even constructing underground cities, in order to keep their members in control while the surface of the Earth undergoes cataclysm.

In the meantime, the rulers will do whatever they can to gain control of the dwindling resources. They will start wars with the express purpose of gaining control of the oil fields and fresh water. As they become more desperate, they will even forego the usual formalities of international law in favor of ruthless conquest. They will dissolve the system of checks and balances that many governments set up as a way of distributing the power more evenly throughout the system. They will likely invoke emergency powers acts (aka martial law) in order to enforce those laws, rules and procedures that they feel are necessary in order to preserve their position in society.

The military systems of the world are mostly controlled by the Illuminati. The governments will be pressured and coerced into war, under the guise of protecting the people. The Illuminati operatives use mind control and other propaganda techniques to convince the people that there is a real enemy that needs to be overcome. In reality, the only enemy is within your consciousness, in the form of fear and the belief in separation. However, until enough people on Earth realize this, there will be escalating warfare.

As oil and other resources become more scarce, more and more wars will break out in an attempt to control the supplies. The Galactic Confederation and other off-planet organizations will step in to prevent the use of nuclear, chemical and electromagnetic weapons, but the use of conventional weapons will continue. Although it can be prevented if enough souls wake up fast enough, it is likely that a third world war will ensue. Some souls believe war will get them what they want (i.e., the spoils of their so-called enemies), but in reality, war will hasten the demise of the 3D world.

Some military organizations will become fragmented and decimated as a result of nearly continuous warfare and disillusionment among the soldiers. Someone on your world once said, “What if they gave a war and nobody came?” That will eventually happen. There are only so many able-bodied soldiers available to fight the Illuminati's wars. They will, of course, attempt to resort to new exotic weaponry that requires less manpower, but their attempts at exploding these weapons will largely fail. Knowing that they cannot simply push a button and annihilate their enemies, the warriors will be forced to induct people that are normally too young or old to fight. This will be met with a tremendous amount of resistance, and defections will reach an all-time high.

With a lack of money and material resources to keep building the military legally, various black operatives will take over, with their nearly unlimited funds, but one thing they still depend on to keep their wars going is the participation of soldiers. Many soldiers will be sick (from chemical poisons such as depleted uranium), others will be disheartened, and still others will be dying from immune system disorders. Some will awaken spiritually and start questioning why they are fighting. Some of their superiors will also begin to question the status quo and begin to grow spiritually.

The Emergence of the New Earth

Eventually the population of the Earth will begin to decline and the remaining resources will begin to grow, and balance will be restored. It is expected that large areas of the planet will be uninhabitable for many years, either due to warfare, climate change, or disease. Most sea-level cities will be decimated. The oceans will rise and obliterate the coastlines. The dead will pile up as the immune system disorders accelerate. Pollution from warfare will make large land areas poisonous chemical dumps. Droughts and floods will drive the surviving population to migrate in search of food and water.

Meanwhile, the self-sufficient communities will thrive and prosper. Although they will still be physically visible to would-be attackers, their high vibration will render them psychologically invisible. Roving bands of soldiers and plunderers will literally go right past the peaceful villages without even seeing them. The lightworkers will be protected in many ways. As they emit positive vibrations, the governments, militaries and Illuminati operatives will either ignore them or fail to find them. To quote this channel, the enlightened ones will “drop off the radar screen.”

Those who are listening to the inner voice of God will be guided as to where it will be safe on Earth. They will meet with others who are receiving similar visions. They will be guided as to how to set up an enlightened government that is unlike the dying systems in the unsafe areas of the world. For a time, they will undergo many challenges, and their egos will still attempt to interfere. However, the councils will be composed of the brightest and best, and great wisdom will come out of the council meetings. All souls will be respected and honored. For a time, the communities will be somewhat isolated from the rest of the world, but eventually, they will form a strong worldwide network of light.

Our advice to those of you reading this message is the same as it has always been. Grow, evolve and expand your awareness of the Limitless Love and Compassion within your Self. Come from the center of your being. Reside in God consciousness. There is really no other way if you want to break free of the illusions of this world. You have our help and the help of the Galactic Confederation. You have more help than ever before.

For those of you that have not yet read the first e-book from the Founders, you can order it from my website (http://www.salrachele.com).

At several junctures in the following material, the Founders refer to their earlier messages (compiled in the first e-book). In particular, they refer to the section on the history of the Earth (from their perspective). It is important to read “The History of the Earth.” In addition to the first e-book, the Earth history series of messages is available in standalone format in the “channeled messages” section of my website (http://www.salrachele.com/channelings.htm)

You can contact the channel at with your comments and feedback on the material, or to schedule a private reading or healing session. For more information on the channel's services, please go to his website, http://www.salrachele.com and read the many articles and messages there.