There are many things in this universe we don't understand. The public has been conditioned by mainstream news that we are the only beings in existence, while Hollywood glorifies the idea of invasion from evil aliens. Reality, on the other hand, is something a bit different. UFO's have been found for centuries, and people have been abducted from all over the world for the last 50 years, all with the government's knowledge, but conveniently kept from the public.

Hollywood has made good attempts at bringing the alien phenomena into public awareness, but there has not been a positive movie about aliens made since the 1980's! The truth is that the ignorance caused by our own government is the biggest enemy, and their alliance with dark forces, such as the well known Zeta-Reticuli greys. There are other dark races out there that not many know of, such as the Reptilians, Draco, and the Annunaki, known to most only through ancient legends. But even lesser known still, are the positive alliances, fighting for the good of mankind.

In the coming years, up to and including 2012, this world will be going through an ascension process, in which we will spiritually move from the dark 3rd dimension, into the higher vibrations of light, love, and spirit of the 5th dimension. Many sensitive people all over the world have already been feeling the effects of this, as our bodies break free of the old double stranded DNA helix, and evolve into new light bodies of vastly superior 12 strand DNA.

The Galactic Federation of Light is made up of many worlds committed to the cause of helping Earth ascend. Within the Federation is the Ashtar Command, a division whose members have the sole mission of helping in the ascension process. They send spiritual guides who speak through a few people in this world, who have a special mission here on Earth. These people with a mission are regular humans who have taken birth just like everyone else, however, their spiritual lineage is not native to this world. The people are light workers and starseeds, whose spirits originate from various worlds within the Federation, such as Lyra, Sirius, the Pleaides, and countless others. There are also children who are born today, whose current bodies are already more highly evolved than most older humans, and they are known as Indigos are crystal children. And lastly, some souls are "walk-ins", where the the original soul born to a body moves on, and a lightbeing walks into the body left behind.

The light workers on this world are only the "ground crew" of the Ashtar Command. The Command is headed by Ascended Masters, and millions of etheric "ships" that surround Earth and watch over us. The ground crew is here to receive their guidance, and to interact directly with the people of Earth.

"The Ashtar Command is the airborne division of the Great Brother/Sisterhood of Light, under the administrative direction of Commander Ashtar and the spiritual guidance of Lord Sananda, our Commander-in-Chief, know to Earth as Jesus the Christ. Composed of millions of starships and personnel from many civilizations, we are here to assist Earth and humanity through the current cycle of planetary cleansing and polar realignment. We serve like midwives in the birthing of humanity from dense-physical to physical-etheric bodies of light, capable of ascending into the fifth dimension along with the Earth.

"We of the Brotherhood of Light, and we who serve in the Intergalactic Fleets and Cosmic Federation Councils, come forth to bring you knowledge for a most eventful and confusing transition ..."

The Ashtar Command is an etheric group of extraterrestrials, angels and lightbeings and millions of "starships" working as coordinators of the activities of the spacefleet over the western hemisphere. Under the spiritual guidance of Sananda (the Most Radiant One), the ascended master who walked the Earth incarnated as Jesus the Christ, Ashtar, the commander of the galactic fleet and representative for the Universal Council of the Confederation of Planets, is currently engaged in Earth's ascension-process. 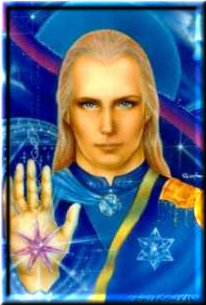 There are 144,000 lightworkers called Eagles connected to the Command. That is the minimum of souls required for the ascension process. These Eagles are a group of souls who don`t identify with a special planet. They know they are one with all, and that they are Christ (fundamental to any discussion of New Age Christology is the recognition that New Agers distinguish between Jesus, a mere human vessel, and the Christ consciousness (variously defined, but always divine, and often a cosmic, impersonal entity)).They serve like cosmic midwives in the ascension process; the birthing of humanity from dense-physical into physical-etheric bodies of Light, capable of ascending with the Earth into the fifth dimension. Lightwork is incorporating Jesus' message of Love and Light into our daily lives, ultimately connecting with our Higher-Self.

There is so much more out there, so much more we need to learn. The Ashtar Command is here to help. If you have always felt "different" throughout your life, like you could never fit in, or have always wanted "to go home", even when sitting in your own house, then you may be a starseed yourself!