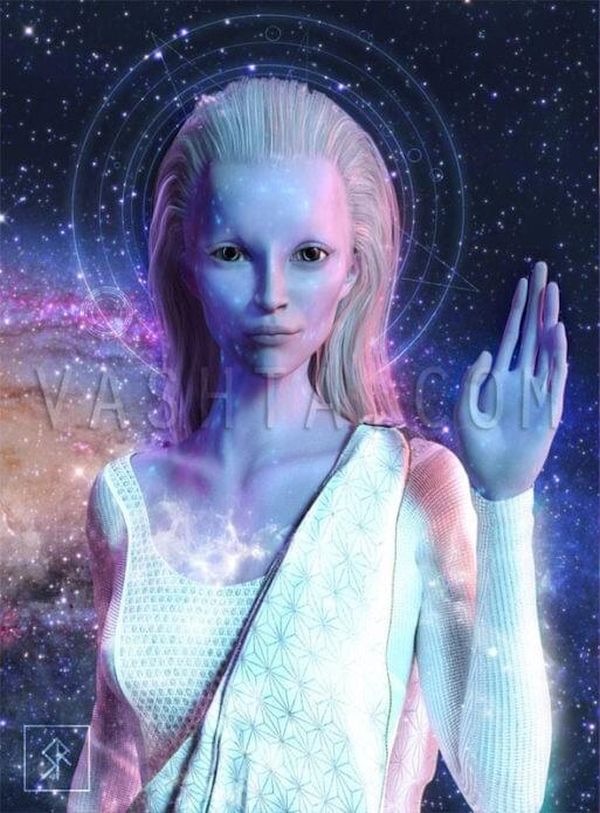 The Andromedans are a very old breed. In fact, all human races are derived from the Lyra system. There is a lot of information on this. Billy Meier also talks about it. The human race, however, did not originally exist in the Lyra system - it came there from another galaxy, but in our galaxy it began its evolution in the Lyra system. According to the Andromedans, there are over 135 billion human beings in the 8 galaxies closest to ours. Nowadays other races are also here. Some of them have had many conflicts with the human race, and these conflicts continue. But a lot is being done now with the hope of alleviating this problem. It comes down to philosophy more than anything else.

Andromedans live an average of around 2007 years. I say "years" because I'm starting to use a linear measure of time - that's the only way I can convey it to you. Andromedans don't see time the same way we do. They claim that our universe, consisting of everything we know and do not know, is a hologram 21 trillion years old. That's what they said. They also said that all things that appear in our universe come from black holes. According to them, near each galaxy there is a black hole from which everything seeps into our space. As they describe it, the universe has evolved (when the Andromedans say "evolved" they mean that the vibration of the universe is still perfecting). In the process of this evolution, certain energies did not want to develop or wanted to regress because they were full of fear of "gaining weight". These energies that contained consciousness formed "bags" which became "heavier." As the vibration of the universe increased (color and sound), packets of resistance burst and exploded. This scenario is apparently starting to repeat itself now in our universe, 21 trillion years after its inception.

Everything in our universe, including us, has emerged from the black hole. Andromedans say we have no age. We are infinite.

You may understand it however you like. According to Vissaseus and Morenae, on March 23, 1994, a specific vibration of color and sound began to emanate from all black holes in the known universe. According to their science, which is very ancient, something like this happened for the first time. This energy and frequency produces holographic projection through all the dimensional levels they believe are their 11-11 creative densities. This new holographic projection has received 12th density. The Andromedans said it has only one frequency - one that does not carry internal duality.

This frequency pulls up all the underlying dimensional levels. The Andromedans reported that third density, as we know it now, will cease to exist. When everything is shifted, it will collapse on its own. Those from the 11th level will go to the 12th. We will probably go to 4th and then to 5th density. From the Andromedan point of view, the fourth density is consciousness. At this level, all beings become telepathic, everyone is aware of everyone, everyone senses everyone - they are all one mind but still separate persons. Fifth density is what we would consider from third density to be light.

So there are individual consciousnesses that have emerged in this 12th density of holographic consciousness. They appeared as something never known before. The Andromedans do not know who these beings are, they cannot even describe them. But apparently these 12 dimensional beings have the ability to SEE through all dimensions and perceive everything going on within them.

This is because certain beings begin to "gain weight" because the frequency shift "pulls it all up". These regressive energies "get pissed off." According to the Andromedans, each of us on planet Earth and on the planets of 21 other star systems actually belongs to a group of beings, individual consciousnesses that actually evolved into 11th density trillions of years ago.

These beings planned an experiment. They decided to go down to the time level, to experiment with the thoughts that create physical matter. The Andromedans say that apparently some large group has descended into 3rd density and found a specific race there with a very specific genetic code, requiring 22 different races of extraterrestrials. All life on Earth has been brought here by traders (Earth lies along the galactic trade route), explorers, miners, "freaks" - very different people. Originally, the Earth was in a different orbit, closer to Mars, and there was nothing on it but ice.