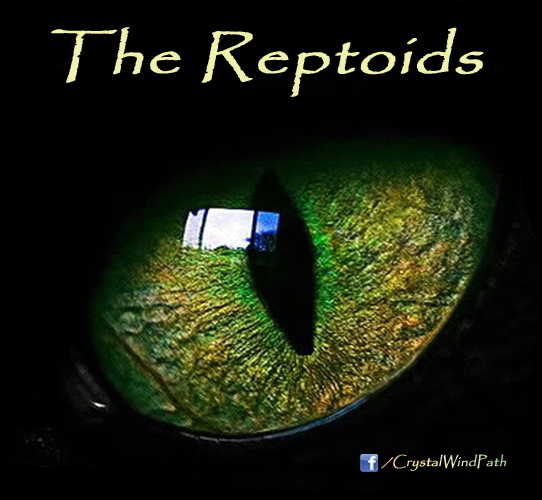 Various types of bipedal, upright walking reptoids have been reported. The three most common types are:

For the most part, the classical reptoid type 1 is what is addressed throughout this site.

Note: Although the reptoid species are divided into these three types, there are physical features that are shared by almost all of them, thus making the clear delineation between the types difficult.

Reptoids range from five and a half to 9 feet in height. They have lean, firm bodies with powerful arms and legs. They have long arms with three long fingers and an opposable thumb. Their feet have three toes and one recessed fourth that is toward the back side of their ankle. The claws are short and blunt. They do not have teats on their upper torso nor do they have a navel.

They have scaled skin that is usually greenish-brown in color. Some also have coffee colored scales that have dark green colored rims. The scales (or scutes) on their backs, thighs and upper arms are usually large. Their hands, abdomen and face are covered with smaller scales, allowing more flexibility. They have wide lipless mouths and the majority of them are reported to have differentiated types of dentition (teeth,) including canines (fangs.)

Reptoids have either large black eyes with vertical slit pupils or eyes that are white with flame colored vertical slit pupils. Their heads are slightly conical in shape and have two bony ridges riding from their brow, across their back sloping skull, toward the back of their head. (Throughout history, these bony ridges may have been misidentified as protruding horns.)

There appears to be no bridge between the Reptoids eyes. Their nasal openings are at the end of a small, flattened nose and are described as two small slits that slant upwards in a V formation.

Some experiencers have reported seeing small openings where ears are expected to be, but no flesh folds extending from the side of the head as human have.

Reptoids having tails and non tailed reptoids have been reported over the years. The tails vary in size and are often observed as being held off the ground. Their posteriors are either like that of a human, with a vertical slit shielding an excretory orifice, or are comprised of a rounded muscular area, extending from the base of the spine to the upper thigh region.

Their genitalia are concealed within a vertical slit located at the base of the torso (cloaca.) In the case of women who claim to have experienced sexual encounters with reptoids (an experience that seems more psychological that physical in origin,) the male reptoids are described as having a penis that is lacking a soft sacked scrotum. Where the scrotum sack is located on a human, the reptilian male, apparently has a firm, muscular bulge leading from the base of the penis to the underside of the torso.

The Draco reptoids, usually standing seven to twelve feet tall, have been reported to be the royal elitists of the reptoid hierarchy. They are seen far less often than other reptoids types. The Draco are similar in appearance to the Reptoid, but they have distinct physical differences.

Draco have wings. These wings are made of long, thin bony spines or ribs that protrude out of their backs. The ribs are adjoined by flaps of leathery, blackish-brown skin. The wings are usually in a retracted position. In some instances, such as reported by author John Keel ('MothMan Prophecies), the beings matching descriptions of the Draco have been seen to actually fly by use of their wings. (With the beings neck cranked downwards upon spectators, the glowing red reflective eyes of a flying Draco would appear to be placed in the middle of their chest as described by eyewitnesses.)

The Draco types appear to have a much more athletic build than the other reptilian beings. Their upper torsos are extremely lean and their neck muscles splay out from the base of their jaw to their shoulder blades. (Their lean build may result from the physical demands required to fly with the use of their wings?)

Some individuals, who had reported Draco contact, said that there were instanced when another Draco, with white powdery scales, approached and gave the others instructions. In every one of these cases, the greenish-brown Draco beings appeared to be submissive and highly respectful towards those with white scales. This reaction indicated that the Draco hierarchy is a caste system dependant on skin color (and possibly other unknown genetic traits).

Other non-human beings, such as the Greys, have also demonstrated similar respect for these winged beings, so it appears as though the Draco are the top dogs in alien command chain.  What remains a mystery is whether these are commanders, kings, generals, politicians or simply caste socialites that are interacting with humans in advanced 'Black' projects of their own design.

In addition to the Draco and Reptoids, the various crossbreed types that many people claim to have encountered share the following physical characteristics.

Most of the reptilian-grey crossbreeds are rather diminutive in size. They are four to four and a half feet in height. They have oversized craniums, large black eyes with vertical slit pupils, no ears, slight torsos, arms and legs.

There have been reports of these creatures as having either three fingers with a fourth opposable or only three long fingers and no opposable fourth. They have been seen to have short claws and in some cases, no claws at all. Their feet are usually covered by the material of their suite, but some experiencers have described their feet as short and stubby, with no toes.

Amidst the various reptilian-grey types, there is also a species that has greenish-tan skin, large almond-shaped eyes that are golden in color with a dark, metallic green vertical slit pupil. They share the same basic physical construct as a grey entity and are usually seen wearing a one piece suite that is the same color as their skin.

Although these descriptions cover the Reptoids, Draco, Draco Prime and various cross-breeds, many other physical types are being reported. The physical differences between one individual reptoid and another are as varied as the differences between one human and another. Just as there are tall and short humans, so must there also be tall and short reptoid creatures. Just as there are people with various skin colors, there are probably reptoid beings with mixtures of colored scales.  Obviously, both Mother Nature and our Intelligent Designers like variety.

We have 835 guests and no members online