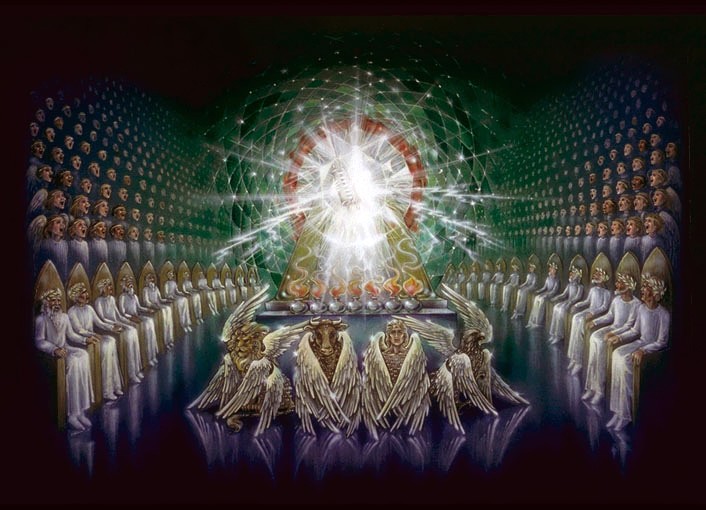 Here is a wonderful message from The Elohim that I have written down in words, but there was so much more information that came to me as clair-cognition. So even though the written message is very clear, they were imparting a much more complex message in terms of our abilities and our successes. I discuss it here first as an expansion of the written message.

The Elohim confirm the propagation of the golden template into the Golden galaxy that George and I (see Energy Report -August 2nd), and some other PAT members (see Shirley Garmon’s vision below) confirmed as taking place on the 31st of July. They lovingly refer to us as the “All-Beings”, with our unique ability to accept, hold and expand energy into our reality and the cosmos as a creationary projection of our consciousness. We are demonstrating our unwavering commitment to Source for which they are most impressed. We are engaging our powerful imaginations to envision a world of perfection at all levels, and worlds beyond the horizon that fulfill even the wildest of dreams.

My impression from them is that there is a leap in the consistent feeling of loving kindness and it is this leap that provides the energetic foundation for an expansion of unequaled power and why our activities with the sacred flames is so important to the creation of the perfect fifth dimension and beyond.  They talk about our bodies as being powerful refined antennae that can receive and transmit the in-flowing source energy at very refined, high frequency levels now, a new achievement. It is the first time they speak of the fact that only humans with a soul are a part of this entire energetic restructuring through the distribution of cosmic energy.

Finally, they want us to hold firm on our highest expectations for the perfect reality in our lives, right now!  I encourage everyone to continue using the Seven Sacred Flames (read the message “The Elohim: Sacred Flames of Creation") at least once a day, in a daily meditation, holding the intention for the best outcome for a particular situation and the highest good for all individuals involved. With daily use in a compassionate frame of mind and heart, success will soon be the reward.

The Elohim Message on August 7th

The Garden of Eden is charged with a spectacular golden light and a lifestream of infinite beauty and perfection flows like the gentle waterfall as all expressions move together into one united field! From here on, life blossoms outward like the lotus flower that explodes in a never ending bloom. Indeed, here we speak of the golden template, a sacred dodecahedron which graces all aspects of creative design in the perpetuity of time (see Shirley Garmon’s vision below and compare it with the dodecahedron form of the new human template which we seeded on October 12, 2014 in the new Golden Galaxy; note, George ).

We are The Elohim and we know of your desire to understand your value and the nature of your involvement in the expansion in this moment. You are the All-Beings: the Beings of the Earth that move great multitudes of energy forth, from within the inner space to the outer space, and through all quantum levels of space, as your multi-dimensional vehicles serve to anchor and stabilize the nature of form within your seen and unseen reality.

Your souls operate on a multitude of levels, as you are living in multiple dimensional expressions.  Some of you are aware of another time and place where great energy flows and this new golden template moves through your current physical vessels and into these new co-ordinates. (I had a dream two nights ago where my body was flooded with waves of golden energy, flowing through my back to my front as I lay on my back in bed. It was a most gentle and loving energy. Note, Carla).

From your third dimensional perspective you may be unaware that you are guiding creation in all other dimensions. These dimensions each reflect not only the constancy of unconditional loving kindness and acceptance of all, but also many other necessary qualities that you are unfamiliar with, including the constancy of energy you sustain for example.  The one founding principle common to each and every one of these expressions is that of unconditional loving kindness and acceptance of everything as being part of the All. As you focus on expanding your capacity for love, either in the giving or in the receiving of love here in this reality, you are therefore necessarily flooding All of Creation with these thoughts and with these energies. Even one quantum of love ripples itself out into and throughout Creation!

To say a large flood of energy will come on a specified date (i.e. I asked about the massive wave, known as X-wave, projected to come on “September 28th” of this year) is truth, only because waves of great import are coming every day and not because it has simply been stated as being so! Energy is everywhere, indeed, everything is constituent energy. Those of you who are able to sense the flow of energy throughout the cosmos have developed finely tuned energetic vehicles, as they were meant to be. Your human vehicles are designed to be receivers as well as transmitters of energies. As your electro-magnetic fields become refined through the conscious application of principles of physical detoxification, your bodies and your fields will naturally expand in amplitude, and therefore inclusion in the activity of the ascension.

However, even those who are unaware of the ascension aide in its realization as the increased light instantly removes areas of blocked and heavy energetic back-flow.

Every individual who has an intact body-mind-soul standard is affected by the high frequency photon light bombarding your earth at this moment and this of course excludes those who have no soul at present. As receivers, you filter these energies and re-cycle them out/ transmit them to the masses after their refinement, for their integration and revision.

The revision is a natural process, whereby those whose bodies repel these energies as too much of an energetic challenge/ overload will re-calibrate naturally to accept a homeopathic dosage of energies needed to expand the level of consciousness of the individual. The expanded consciousness then automatically and naturally allows more photon light in to the body-mind-soul system, opening him up to the possibility of moving to another newly expanded reality.

This whole process feels slow to you by your standards, however in reality it happens instantly!

In every instant, there is energetic upliftment and this can be measured, as each human vehicle can hold the light in greater and greater amounts. This is the ongoing nature of the ascension and as you hold the highest love and light for your own personal experience, you immediately move to the highest expression of your reality within your grasp. Do this daily and your reality shall reflect more grace, more peace and serenity, upon which more joy shall grow. Never give up this activity – it is the ascension!

We are by your side, lovingly encouraging you in your continuing quest to find your most brilliant reality!

Last night, I went to bed around 11:30 p.m. Instantly, after closing my eyes, I start to see a pool of Dolphins; I follow them as this is not the first time I’ve followed or lead a pool of Dolphins. This time, they are leading me and I’m flying behind. They swim for a long while, and we seem to be out in the open sea but finally they arrive at their destination with me in tow.  They arrive at wall of some rocks which look very old and ancient. They proceed thru the rocks, as there are large holes, large enough to accommodate the Dolphins, and me, as well. I follow them thru, and at first, it is kind of dark and a little, foreboding, but we are swimming thru a lot of water, similar to a tributary surrounded by rocks. Finally, they bring me to a place that looks, somewhat, like ancient Atlantis. At first, I think that I see small white houses, but no, they become clearer and they look as if they are small, white, ancient Grecian temples made of the same type of bricks and pillars that comprised ancient Greece. I see people below who are playing in the water. The Dolphins are also playing in the water. I look at the beautiful foliage and its beauty is unparalleled. I fly down to ask these people where I am. I ask this person in the water if this is Agartha. He shakes his head “no” and points toward the heavens as if Agartha is now located within the heavenly realms. After he points toward the heavens, I instantly fly up toward the heavens and seem to be among the stars.

I am steadily ascending and I suddenly stop as I see directly in front of me a Dodecahedron (see picture below).It is large as an asteroid and smoky gray, in fact, it is clear, smoky, grey glass.  It moves through the heavens and I know that it is headed toward Europe. As it makes it way through the heavens, it is turning consistently over and over, and moving slowly because of its large mass (compare with the dodecahedron form of the new human template here which we seeded on October 12, 2014; note, George).

I open my eyes because “nature calls.” After I come back to bed, close my eyes, the vision resumed, only this time, I am back with the Dolphins, and the other-worldly looking people. The foliage is beautiful, lush and green, unlike nature here. The colors were amazingly vivid! Again, “nature called” and I answered. When I came back to bed, closed my eyes again, the same thing happened again. I’m back in this beautiful, Atlantis-looking place with the Dolphins and the otherworldly looking people.

POINT OF FACT: This went on all night. Nature constantly called every 30 or 40 minutes, and when I came back to bed, the vision resumed. It was as if the Creator wanted me to know, totally, absolutely, unequivocally, that this was a vision and there was no way that I could question it or doubt its validity as I’ve often done before as you are aware. Dr. Stankov, this continued until around 4:30 to 5:00 a.m. Same vision and nature steadily calling. I wonder if anyone else is having issues with “Nature” calling so frequently, as I.