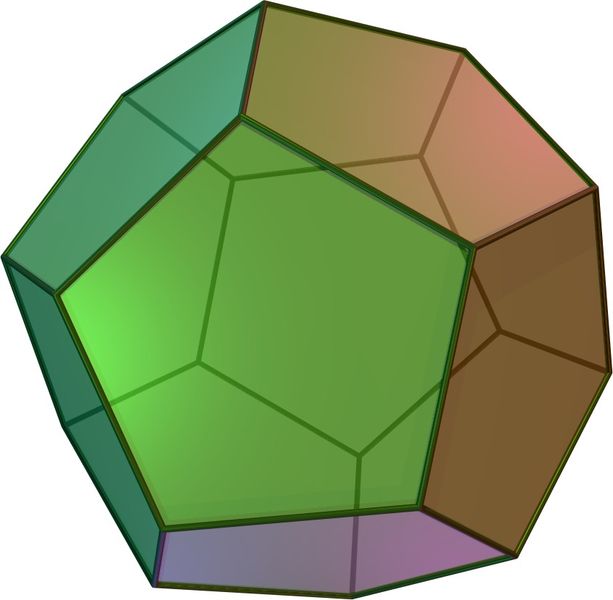 The Dodecahedron has been a source of metaphysical interest for at least 2000 years. Like a crystal or gem, its facets and symmetries compel our eyes and hearts to observe life more deeply. Some have believed that the Dodecahedron represents an idealized form of Divine thought, will, or idea.

To contemplate this symbol was to engage in meditation upon the Divine. Today many people believe there is a lost knowledge residing in the past, slowly being rediscovered. It is known that figures like Pythagoras, Kepler, and Leonardo, among many, were educated in these Sacred Geometries, and held many beliefs about them and their role in the Universe.

The dodecahedron is the embodiment of the sacred Aether–that etheric presence which supercedes all formation on the matter plane, creating an intelligent blueprint beyond space, time and even its own parameters of dimension. Wherever the dodeca abides in the elemental state, it carries the charge of the Aether through all points of its physical structure and into whatever medium with which it is interacting. Like the Icosahedron, the Dodecahedron is a major energy system for the planetary energy body. The Universal Hierarchies access the planetary grids of elementally-structured worlds through the sacred dodeca. Through the symmetric fields of the dodecahedron, angelic harmonics are spiraled down from the stellar kingdoms into the earth's heart, and sent upward again to re-connect with the "Living Lights" of the star-worlds. This is the path of astro-chemical irradiation that seeds the very Spirit of the planet with is co-creative role in the universe.

This solid is classically attributed to spirit, probably because it was the last discovered and because of the pentagonal faces. Its twelve faces has naturally been attributed to the zodiac, and there have even been dodecahedral calendars. The symmetries discussed above exist in a dual form here too.

The dodecahedron can be seen as the union of five intersecting cubes, whose corners touch the vertices of the dodecahedron (this is a rather complex structure and hard to visualize). At each vertex three different cubes meet. Along each side of the dodecahedron an edge from a cube runs, creating a rather neat system of correspondences between the five elements and the edges like the system mentioned above for the icosahedron.

The evolution of the Quinta Essentia into the four elements may thus be described as follows: The original form of the Tetrahedron is created out of the primordial chaos by being the simplest and most stable form. It combines in various ways with itself, either by moving and mixing, forming the Dodecahedron and Fire, or by linking together and building the Icosahedron and primordial Water. However, while both polyhedrons are close to being perfect spheres, they don't fit together. These imperfect interactions between the growing numbers of polyhedrons force them to order themselves according to cubical symmetries, and Earth and Air are formed.

We have 847 guests and no members online