Icosahedral - Dodecahedral Structure of the Universe 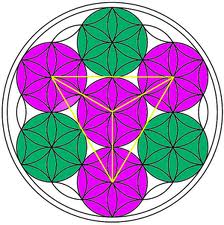 "A Number is the essence of all things, and the organization of the Universe in all its definitions represents in general the harmonic system of numbers and their ratios".

About what ratios spoke Aristotle? Responding this question it is necessary to tell about two achievements of the Pythagorean science: (1) about the "Principle of multiple relations""division of the line segment in extreme and middle ratio" called later by the "golden section".

As it appeared, the internal proportions of the "teraxis" find out among many natural phenomena of the objective world, in particular, in the law of the cord oscillation. The musical row proportions constructed on this basis provided the best, harmonic consonance: the ratio of each member of the "tetraxis" to the previous one gave the "octave" (2:1), the "quinte" (3:2), the "quarto" (4:3). So, on the example of the sound wave process for the first time in the history of science the major property of all sound waves, their multiplicity, was revealed. The "Musical harmony " discovered by means of the "tetraxis" analysis was confirmed in experience with a traditional cord; in the sounds "generated" by vessels filled by water in the given proportions; in the sounds "generated" by the blacksmith's hammers of different weights etc.

A conviction in universality of the "tetraxis" principle ripened step-by-step and this prepared the basis for transferring of this model on the Cosmos. 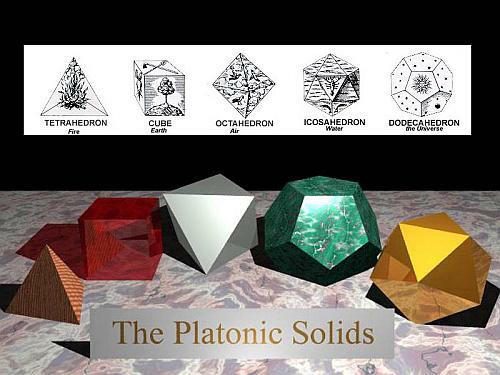 A representation about the "through" harmony of the Universe invariably was associated with its implementation in these regular polyhedrons. And the fact that the dodecahedron, the main "cosmic" figure, was based on the golden section gave to the latter a sense of the main proportion of the Universe.

"Euclid did not intend to write the systematic tutorial on geometry. He set as a goal to write the work about the regular polyhedrons intended for the beginners by virtue of what he set forth all necessary information" - the joke of the known English geometer d'Arci Thompson, as well as any good sharpness, contains in itself a grain of true. According to Proclus, the commentator of the "Euclidean Elements", Euclid considered the methods of construction of the Platonic Solids as the "crown" of all thirteen books of the "Elements". And he placed just this major mathematical information in the concluding, thirteenth book.

Plato's cosmology became the basis of the so-called icosahedro-dodecahedral doctrine, which by red thread passes through all human science. The essence of this doctrine consists of the fact that the dodecahedron and regular icosahedron are typical forms of the nature in all its manifestations starting since cosmos and finishing by micro-cosmos.

The problem about the form of the Earth permanently took minds of scientists since the antique times. And when the hypothesis about the spherical form of the Earth got scientific grounds there arose the idea that the Earth represents by itself the dodecahedron by the form. So, already Plato wrote: "The Earth, if to look at it from above, is similar to the ball consisting of 12 skin's pieces". This Plato's hypothesis found further scientific development in works of physicists, mathematicians and geologists. So, the French geologist de Bimon and the well-known mathematician Poincare considered that the form of the Earth represents by itself the deformed dodecahedron.

The Russian geologist Kislitsin also used in his researches the idea about the dodecahedral form of the Earth. He put forward the hypothesis that 400-500 million years ago the geo-sphere of the dodecahedral form was turn into the geo-icosahedron. However, such transformation appeared not full and uncompleted. As the result the geo-dodecahedron appeared to be inscribed into the frame of the icosahedron.

In the last years the hypothesis about the icosahedro-dodecahedral form of the Earth was subjected to verification. For this purpose the scientists combined the axis of the dodecahedron with the axis of the terrestrial globe and, gyrating around of it this polyhedron, paid attention that its edges coincide with gigantic disturbances of Earth's crust. By taking then regular icosahedron as a polyhedron, they established that its edges coincide with more small-sized partitionings of Earth's crust (mountain ranges, breaks etc.). These observations confirm the hypothesis about proximity of the tectonic framework of Earth's crust with the forms of the dodecahedron and icosahedron.

The hubs of the hypothetical geo-crystal are as though centers of certain anomalies on the planet: in them all global centers of extreme atmospheric pressure, regions of the hurricanes origin are arranged; in one of the hubs of the regular icosahedron (in Gabon) the natural nuclear reactor worked 1,7 million years ago was found. The gigantic mineral deposits (for example, Tyumen field of oil) are dated for many hubs of the polyhedrons, anomalies an animal pattern (the lake of Baikal), centers of development of cultures of mankind (Ancient Egypt, Northern Mongolia etc.).

All these examples confirm surprising insight of Plato's intuition.

The discovery of the quasi-crystals (based on the regular icosahedron) made in 1984 by Israeli physicist Dan Shechtman became the outstanding event in modern physics, as this discovery shows that the "pentagonal" symmetry and the icosahedral form play also a fundamental role in crystallography. 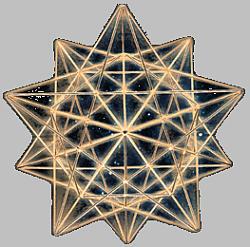 The works of the American researcher Winter heading the group "Planetary Palpitations" became the quintessence of geometrical ideas about all being. He is a preacher of the ideal form, unitary "golden section", which like to the "golden chain" connects the gene and the Universe. Accepting the concept of the icosahedro-dodecahedral form of the Earth, Winter develops it further. He pays attention on the fact that the angle described by the Earth's spin axis during its precession for 26 000 years is equal to 32°. It exactly is equal to that angle, under which it is necessary to incline the cube, that, gyrating it then around of the axis (with five stops) to get the dodecahedron. In Winter opinion, the power skeleton of the Earth represents by itself the dodecahedron inscribed into the icosahedron, which, in turn, is inscribed into the second dodecahedron. The geometrical ratios between the indicated polyhedrons are represented by the golden section.

Dodecahedral structure, in Winter's opinion, is inherent not only in the power skeleton of the Earth, but also in the constitution of living material. So, during division of the ovule it is formed at first the tetrahedron from four cells, then the octahedron, the cube, and, at last, the icosahedro-dodecahedral frame of the gastrula. And at last, perhaps, it is the most important: the structure of the life genetic code represents by itself the four-dimensional development (on the time axis) of a rotating dodecahedron! Thus, it appears, that all Universe from the Meta-Galaxy up to the living cell is constructed by one principle - infinitely entered each to other dodecahedron and icosahedron being among themselves in the proportion of the golden section!