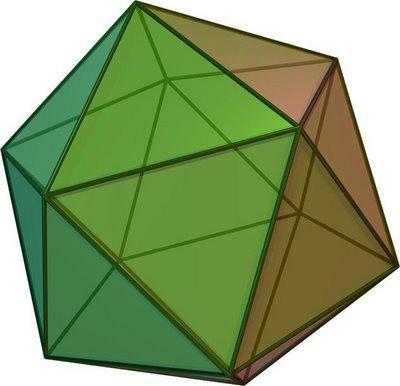 The Icosahedron shape represents movement, flow and change. It has 20 sides all of which are equilateral triangles. The Icosahedrons’ shape can be found in nature in the form of various viruses. Plato assigned the Icosahedron to represent the element of water, and it is said to offer help in balancing the emotions. Working with the Icosahedron can also help facilitate a regenerating, healing energy into physical reality.

Kepler associates this volume with the water element. Water can change from gas to liquid to solid. It can be visible and invisible. This catalytic shape induces movement.

The Icoshaedron is an energy grid of the water crystal and a matrix for transmutation of both etheric and physical properties through the fluid flow of nature. The icosa is one of the major grid formations of the earth's energy-wave crystals. It's free-movement synthesis with the tides of life imbue this living form with the gematria of source-bonding–the strong pull of sentience toward source-conceptual reality. "Source-conceptual reality" is the realm of unconscious connection and response to the "source" of its conception. Such sentience is not extremely out-reaching in creative forms that do not perpetuate its original source-signature, and thus is not easily transformed into universal sub-systems. However, it is very mutable with source-based flow, and in this way, develops its fluid and conductive states of perpetuation.

Copper is known to capture the highest level of tachyon energy. Ether, prana and tachyon energy are the same thing, they extend everywhere and are accessible at any point in space/time/dimension. If one creates an Icosahedron out of Copper wire or any form of copper piping or tubing then one has discovered the great secret of understanding zero-point energy, ZPE.

This polyhedron traditionally corresponds to water, possibly because it rolls quite easily. Its 20 faces could correspond to the sephiroth and qlippoth. While the octahedron and cube, have many symmetries involving the four elements, trinities and dualities, the icosahedron and dodecahedron, have links to the five elements and the trinities and dualities. Thus they correspond closer to the whole system than the more material elements, which deal with just the four elements.

These symmetries are harder to discern, since traditionally we humans have a tendency to avoid high-order groups, especially odd symmetries (it’s worth noting that the number five is sacred to the Discordians since it is the smallest number of factors the human mind is unable to handle at once).

The icoshedron is a polyhedron, made up of twenty equilateral triangles that are arranged around a single point, with twelve vertices, thirty edges, and twenty faces. The Icosahedron is the fourth simplest solid that can be created in 3D, and is one of the Platonic Solids.