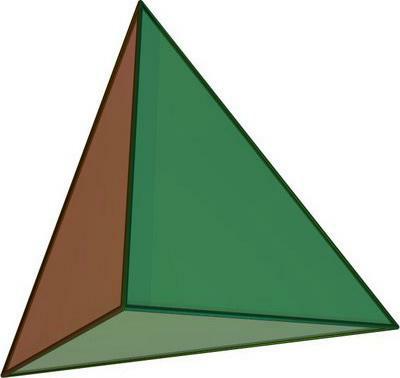 The simplest solid object — a tetrahedron — has four sides; hence four denotes solid matter in general and the Earth in particular, as the Earth is a solid object bounded by four cardinal points (North, South, East and West).

Tetrahedron- a ternary, light-phased to the Divine Fire infusing the spiritualized mind of the soul. This geometric pattern is attuned to things of dimension and realization through the uniting of esoteric intelligence and exoteric action. It serves as the connection between that which is envisioned and that which is accomplished. Its power flow is from above (the zenith) to below (the nadir), through the three Divine Creation Signals or Tetramorphs, which are a trinity of Elohim-command posts stationed with the greater geometric crystalline matrices of the universal domain. The tetrahedron serves as the first pillar in the spiritual temple and is a vehicle of higher Light manifestation into the matter plane.

The Zenith of the Tetrahedron: the point of dynamic potential; the supernal node toward which the axial motion of events is being propelled.

The Nadir of the Tetrahedron: from this line is issued the passive quality. Herein lies the unseen quotient of the subordinate factors.

The Outer Edges (along the plain of the base): the balance of the holistic medium. These points contain the energetic nodes of the phases of transition which surface into the material realm as a result of the spiritual dynamics of the whole medium.The Tetrahedron classically represents Fire, and each face is also the alchemical triangle of fire. The Golden Dawn called it the Pyramid of Fire, and used it as the admission badge for the path of Shin. The three upper triangles represents Solar Fire, Volcanic Fire and Astral Fire, while the bottom triangle, often hidden from view is the latent heat. The upper triangles are also linked to the three fire-signs Aries, Saggittaurius and Leo.