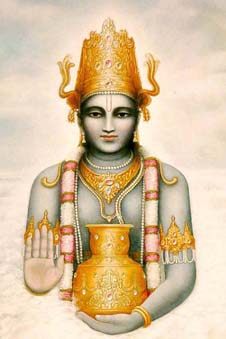 Dhanwantari is the physican of the gods, the promulgator of the Ayurveda.

Dhanwantari arose at the time of the churning of the ocean of milk, holding the cup of Amrita, the life-giving elixir. He also carried the Jalooka (leech, used by Ayurvedic practitioners for bloodletting) and the Vaishnava symbols like Srichakra and Sankh. To some he is really an incarnation of Lord Vishnu.

Commonly worshipped as the God of Medicine, DHANVANTARI is regarded as the origin exponent of Indian medicine. Dhanvantari has many myths and legends woven around him. He emerged with the pot of ambrosia (symbolic of medicine) in his hand from the ocean when it was churned by the contesting gods and demons. He is viewed as the very incarnation of God Vishnu. He is said to have recovered ambrosia which had been lost, and thus obtained a share in sacrifice.

Legends make him reappear as “DIVODASA” the prince of Benaras (Kasiraja), in the family of Ayus. Dhanvantari, Divodasa and Kasiraja are names of the same person who is “the first god and who freed the other gods from old age, disease and death”, and who in his Himalayan retreat taught surgery to susrutha and other sages. DHANVANTARI appeared on earth in Banaras in the princely family of Bahuja and became known as Divodasa; he wandered about as a mendicant even during his early years.

DHANVANTARI also appeared to have been an actual historical person, although his precise identity is hard to be ascertained. He taught surgery and other divisions of Ayurveda (Indian system of medicine) at the instance of susruta, to a group of sages among whom Susruta was the foremost.

DHANVANTARI is regarded as the patron-god of all branches of medicine. While DHANVANTARI is not credited with any medical treatise of his own, in the early accounts, there is a voluminous glossary and material medical in nine sections known as Dhanvantari-Nighantu; it is a compilation which is probably contemporaneous with the famous Amara-kosha (A.D. 100). There are a few other works which are also ascribed to Dhanvantari.

There are numerous preparations which are ascribed to him, and many of them quite ancient.

Dhanvantari-Nighantu is considered the most ancient of the medical glossaries that are available. The original work is said to have been in three recessions; the present version which may have been based on one of them, is in six sections and deals with 373 medicinal substances; their names, synonyms, and brief description of properties being given. The work which claims to be ‘like the third eye’ for the practicing physician, is extensively relied upon, despite several more comprehensive glossaries that have been compiled subsequently. Since there are no authentic source of information, this text can be considered more as indicative.