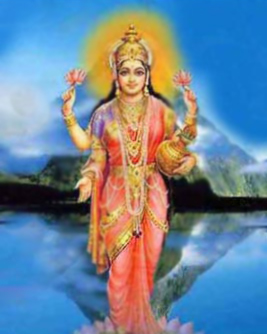 In early Vedic Times Prithivi, or earth, was worshiped as a fertility god in conjunction with her divine husband Dyaus, the sky. At that time they were both at the center of the creation myth. In that role she was the mother of gods like Indra and Agni. As time went on and Hinduism developed, Prithivi was assigned a lesser role as mother of all creatures on the planet and their nourisher and sustainer. She became associated with Vishnu, who is the preserver in the prevailing Hindu Triad responsible for creation, sometimes as one of his wives and at others as a close affiliate. Prithivi is the one who often complains to Vishnu against demons who depredate and ravish the earth and cause suffering among all beings living on it. Yet Prithivi has the adverse reputation of not always caring for every being on earth. Nevertheless, the myth on how Prithivi was made to succumb to meet the demands of all beings living on her is fascinating enough to warrant telling here.

At one time, when the earth was quite young, there reined a king named Vena. He had been installed on the throne by all the sages to govern the earth with all beings on it. As time went on Vena, vain of his universal dominion, grew wicked and banned all worship of, and offer of sacrifice, to the gods. This enraged the sages who had sponsored him and they beat him to death with sacred grass. After Vena's death there was no-one to rule the earth and everything fell into disrepair. There was total anarchy and people constantly suffered at the hands of evil-doers. There was famine and pestilence and people began to die everywhere. Now the sages were alarmed at this sorry state of things and began to regret their execution of Vena. So they gathered together and the body of the evil king was exhumed. The sages rubbed his right thigh and out of it sprang a dwarfish, black-skinned, flat-faced demon. Now Vena was cleansed of all evil which left him in the form of the demon. Next, the sages rubbed the king's right arm and out of it sprang Prithu, a resplendent lad who was a manifestation of Agni, the fire god. Immediately after becoming manifest Prithu arranged for the liberation of his father's soul from hell into the purity of heaven.

At the appearance of this beautiful youth, all the people of the earth began to rejoice thinking that all their troubles were, at long last, over. Prithu was invested with universal dominion, like his father before him, by the sages but a problem arose. Though Prithu was a just ruler and a pious person yet earth, or Prithivi, would not yield to the labors of men and famine and pestilence persisted despite the able king.

In anger Prithu took his bow and drove an arrow into the heart of Prithivi but she took the form of a cow and ran away. Prithu gave chase but Prithivi ran till she came to the domain of Brahma and sought refuge of him.

He refused saying that Prithu, as king of the earth, had the right to ask Prithivi to produce for his people and Brahma could not help her go against the interests of the people. The benign god advised Prithivi to accept Prithu as her husband and obey him.

So Prithivi agreed and the king and the fickle goddess were married. Hereafter Prithivi docilely served her husband and the people of the earth were blessed with plenty but legend has it that Prithu did not treat Prithivi properly and often beat her to induce her to produce more. The popular significance attached to this ill-treatment of Prithivi is that men habitually ill-treat the earth yet she, like a patient cow, keeps on serving them and, thus, keeping them alive. Thus, in mainstream Hindu myth there is a lot of sympathy for Prithivi and she is popularly conceived of as a symbol of patience.