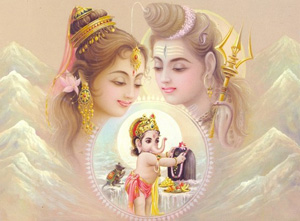 Parvati, Goddess of Love and Devotion

The Story of Parvati

The times were dark. Demons from the netherworld had driven the gods out of their heavenly homes. Unfortunately Shiva, the God of War, was no longer there to defend them.  Grieving the death of the woman he loved, Shiva had turned his back on the world and all its pleasures. He now lived in a dark cave and spent his days in meditation and learning.  His spiritual powers had become immense, but Shiva was no longer concerned with the problems of the gods and would not come to their aid.

Desperate for a solution, the gods consulted the mother goddess, Shakti, who suggested that only a son of Shiva could wage a successful war against the demons. Then she agreed to take another form and draw Shiva out of his cave and get him to father a warrior who would banish the demons. Shakti was reborn as the daughter of the Lord of the Mountains, and she was given the name Parvati.

Even as a young girl Parvati was in love with Shiva. Determined to win his affection, she would visit his cave each day to bring him fruit and to sweep the floor of the cave and decorate his cave with flowers. But Shiva spurned her efforts. (Some versions say he rejected her because of her dark skin.)

But Parvati was determined. She decided to go into the mountains and become an ascetic herself, thinking perhaps this would win his love.

But she did not leave until she had obtained a pledge from Shiva’s manservant that he would guard Shiva's bedroom and keep him chaste.  A demon disguised itself as Parvati. It seduced Shiva and attempted to kill him by lining its illusory vagina with nails.  Shiva was not fooled and put a sword on his penis and vanquished the demon.

Informants told Parvati that a woman had visited Shiva, and she flew into a jealous rage, her anger erupting as a lion. Furious with the guard who had agreed to protect Shiva, she turned him into a stone.

But, for the most part, Parvati just continued following her plan. Living in the forest with nothing to eat and with no clothes to protect her tender body from the fierce weather, she completely mastered her physical needs. Soon she was able to match Shiva’s awesome powers by creating incredible energy in her yoga meditations—enough energy to attract the attention of the supreme deity, Brahma.

Brahma took pity on Parvati and asked what she wanted.  Ashamed of her dark skin, she told him she wanted golden skin and he granted her wish.

He split Parvati in two parts. In some versions of the myths the horrific, black side became Kali, "Black Mother Time", while Parvati's new skin glowed golden like the sun.

When Shiva saw her and realized how beautiful and powerful she had become, he was unable to resist her.

The two were married in a sacred ritual performed by the gods and spent their honeymoon on the mountaintop that was the center of the universe. Parvati’s consistent affection soon softened Shiva’s heart toward her.

Parvati kept her promise to the gods. She sent them part of Shiva’s aura which was in turn given to the river goddess Ganga who cooled it in her icy waters until it formed a seed.

The seed was planted in the fertile forest floor where it grew into the war god Kartikay.  He soon took command, defeated the demons, and restored the heavens to the gods.

But Parvati longed for a child of her own.  Shiva didn't want to be bothered with offspring so he spitefully gave her a scrap of cloth and told her to make a doll and cuddle it instead.

Hurt by his remark she withdrew to a cave to meditate and get control of her emotions. Grasping the cloth to her breast, Parvati’s tears dropped on it and the cloth grew into the form of Ganesha, her son.

She assigned her newly created son to guard over her cave and to keep out all strangers. In the meantime Shiva began to regret his impulsive act and came to find Parvati and apologize. Ganesha didn’t recognize him and blocked his way.

Shiva flew into a rage and beheaded Ganesha. Parvati’s grief was so intense that Shiva promised to find Ganesha another head.  Shiva could only find an elephant's head, which probably seemed a bit suspicious to Parvati, but there was nothing she could do.

Thus Ganesha was reborn as half human, half elephant. He became the Keeper of the Threshold and the God of Good Fortune, an obstacle to all that is undesirable.

His union with Parvati eventually inspired Shiva to accept pleasure into his life and he soon became the patron of the arts. The great warrior, much to the delight of all the gods, had become the Lord of Dance.

Parvati also awakened his concern for the world by honoring him by asking his opinion about important issues. As he spoke, Shiva revealed the learning that he had gathered in his meditations, ensuring that the energy created by his asceticism was channeled for the good of all mankind.

Parvati represents the part of ourselves that creatively brings forth nourishment even in the midst of what seems to be rejection and disapproval. She is a wonderful affirmation that there are no limits to what a woman can do when she uses her spiritual energy in the pursuit of any goal she chooses.

When we embrace love, Parvati is there to bless us.

Mantra to the Goddess Parvati

your powerful yet gentle strength

more beauty and soul into my life.