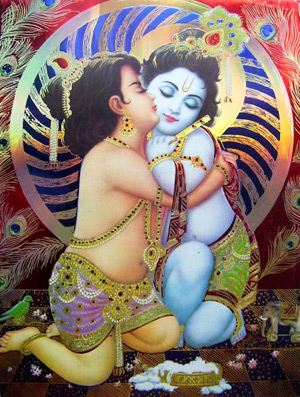 Balrama (or Balarama) was born as the brother of Krishna. Balrama is a symbol of strength, an obedient son, an ideal brother and husband, an ideal man and god. He is a protector from desires, the divinity of strength or the strength of the divine, symbolizing duty, honesty and simplicity.

Vishnu incarnated as Balarama when Indra and the other gods came to lord Vishnu and asked for release from the demon son Kamsa, king of Mathura. Vishnu took one black and one white hair from his head and promised that these two would come to fight against the demons. This way, first Balrama (the white hair) and then Krishna (the black hair) incarnated in the womb of Devaki. To save him from Kamsa, Balrama was transferred secretly from Devakis womb to that of Rohini´s, from which he was born. Together with Krishna he grew up in a cowherd's family.

At an early age, he killed the demon Dhenuka, accompanied Krishna to Mathura and supported him until Kamsa was killed. Balarama also released Krishna´s son, Samba, from Duryodhana's prison.

His wife was Revati, king Raivata´s daughter. They had two sons, Nistha and Ulmuka.

The Story of Balarama

(Balabhadra and Baladeva are other forms of this name.) The elder brother of Krishna. When Krishna is regarded as a full manifestation of Vishnu, Balarama is recognized as the seventh Avatara or incarnation in his place. According to this view, which is the favorite one of the Vaishnavas, Krishna is a full divinity and Balarama an incarnation; but the story of their birth, as told in the Mahabharata, places them more upon an equality.

It says that Vishnu took two hairs, a white and a black one, and that these became Bala-Rama and Krishna, the children of Devaki. Balarama was of fair complexion, Krishna was very dark.

As soon as Balarama was born, he was carried away to Gokula to preserve his life from the tyrant Kansa, and he was there nurtured by Nanda as a child of Rohini. He and Krishna grew up together, and he took part in many of Krishna's boyish freaks and adventures.

His earliest exploit was the killing of the great Asura Dhenuka, who had the form of an ass. This demon attacked him, but Balarama seized his assailant, whirled him round by his legs till he was dead, and cast his carcass into a tree. Another Asura attempted to carry off Balarama on his shoulders, but the boy beat out the demon's brains with his fists.

When Krishna went to Mathura, Balarama accompanied him, and manfully supported him till Kansa was killed. Once, when Balarama was intoxicated, he called upon the Yamuna river to come to him, that he might bathe; but his command not being heeded, he plunged his ploughshare into the river, and dragged the waters whithersoever he went, until they were obliged to assume a human form and beseech his forgiveness. This action gained for him the title Yamunabhid and KaIindikarshana, breaker or dragger of the Yamuna. He killed Rukmin in a gambling brawl. When Samba, son of Krishna, was detained as a prisoner at Hastinapura by Duryodhana, Balarama demanded his release, and, being refused, he thrust his ploughshare under the ramparts of the city, and drew them towards him, thus compelling the Kauravas to give up their prisoner. Lastly, he killed the great ape Dwivida, who had stolen his weapons and derided him.

Such are some of the chief incidents of the life of Balarama, as related in the Puranas, and as popular among the votaries of Krishna. In the Mahabharata he has more of a human character. He taught both Duryodhana and Bhima the use of the mace. Though inclining to the side of the Pandavas, he refused to take an active part either with them or the Kauravas. He witnessed the combat between Duryodhana and Bhima, and beheld the foul blow struck by the latter, which made him so indignant that he seized his weapons, and was with difficulty restrained by Krishna from falling upon the Pandavas. He died just before Krishna, as he sat under a banyan tree in the outskirts of Dwaraka.

Another view is held as to the origin of Balarama. According to this he was an incarnation of the great serpent Sesha, and when he died the serpent is said to have issued from his mouth.

The " wine-loving " Balarama (Madhupriya or Priyamadhu) was as much addicted to wine as his brother Krishna was devoted to the fair sex. He was also irascible in temper, and sometimes quarrelled even with Krishna: the Puranas represent them as having a serious difference about the Syamantaka jewel.

He had but one wife, Revati, daughter of King Raivata, and was faithful to her. By her he had two sons, Nisatha and Ulmuka.

He is represented as of fair complexion, and, as Nilavastra, `clad in a dark-blue vest.' His especial weapons are a club (khetaka or saunanda), the ploughshare (hala), and the pestle (musala), from which he is called Phala and Hala, also Halayudha, plough-armed; Halabhrit, 'plough-bearer;' Langali and Sankarshana, 'ploughman;' and Musali, `pestle-holder.' As he has a palm for a banner, he is called Taladhwaja. Other of his appellations are Guptachara, who goes secretly; 'Kampala and Samvartaka.