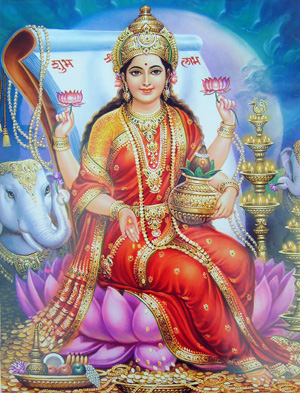 Lakshmi, Goddess of Light and Beauty

Lakshmi was the daughter of the sage Bhrigu and took refuge in the ocean of milk when the gods were sent into exile. Lakshmi was reborn during the Churning of the Ocean.

As soon as the gods saw Lakshmi, they all fell in love with her beauty. Shiva claimed Lakshmi as his wife, but since he had already taken the Moon, her hand was given to Vishnu, whom Lakshmi herself preferred.

Lakshmi was reborn as his consort each time when Vishnu incarnated. For example, Lakshmi was Sita to Rama, Radha and later Rukmini to Krishna.

Lakshmi is the goddess of light, beauty, good fortune and wealth. Being the consort of Vishnu, the preserving principle, Lakshmi also signifies love and grace. Lakshmi often expresses her devotion to Vishnu by massaging his feet as he lies on the coils of the snake Shesha. While Lakshmi is generally worshipped to achieve success, she does not reside long with anyone who is lazy or desires her only as wealth.

Lakshmi is the consort of the god Vishnu. She is one of the most popular goddesses of Hindu mythology and is known as the goddess of wealth and purity. 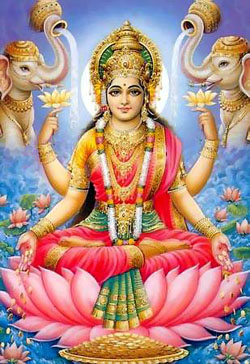 Lakshmi is commonly portrayed as a beautiful woman with four arms, standing on a lotus flower. There is usually one, or sometimes two elephants behind her, anointing her with water. She is often depicted sitting beneath Vishnu, massaging his feet.

The rebirth of Lakshmi

One of the most compelling stories in Hindu mythology is that of the Churning of the Milky Ocean. It is the story of the gods versus the demons and their fight to gain immortality. It also tells of the rebirth of Lakshmi.

Indra, the warrior god, was given the responsibility of protecting the world against the demons. He had protected it successfully for many years, and the goddess Lakshmi's presence had made him sure of success.

One day, a wise sage offered Indra a garland of sacred flowers. In his arrogance, Indra threw the flowers to the floor. According to Hindu belief, this disply of arrogance upset Lakshmi, who left the world of the gods and entered into the Milky Ocean.

Without her, the gods were no longer blessed with success or fortune.

The world became darker, people became greedy, and no offerings were made to the gods. The gods began to lose their power and the asuras (demons) took control.

Indra asked Vishnu what should be done. He told Indra that the gods would need to churn the Milky Ocean to regain Lakshmi and her blessings. He then told them the Ocean held other treasures which would also help them. This included the elixir of life, a potion bestowing immortality, which would enable them to defeat the demons.

The story of the Churning of the Ocean tells of how the gods worked together to churn the ocean. They churned for many years, but it was 1,000 years before anything rose to the surface.

Finally, the treasures began to rise to the surface. Among them, a beautiful woman standing on a lotus flower. This was Lakshmi, who had returned to the world. With her presence, the gods eventually defeated the demons and chased them out of the world.

This story highlights the good fortune and success that Lakshmi bestows upon those who work hard and seek help sincerely. It also demonstrates that during times of success, one must never become complacent or arrogant, as success has a way of getting away from people.

Hindus believe that anybody who worships Lakshmi sincerely, and not in greed, will be blessed with fortune and success. It is said that Lakshmi resides in places of hard work, virtue and bravery, but leaves whenever these qualities are not apparent any more.

Lakshmi is particularly worshipped during the festival of Diwali. This festival commemorates the epic story, Ramayana. Ramayana is the legend of Lord Rama's battle with the demon Ravana, in which Lakshmi features.

In the story of Ramayana, Sita is married to Lord Rama. Hindus believe Sita is an incarnation of Lakshmi. The story tells us that Rama had been cast out of his rightful kingdom, and had gone to live in a forest with his wife and brother.

The battle between Rama and the demon Ravana begins when Ravana abducts Sita from the forest. The epic follows the story of Rama defeating the demon, and his eventual return to his kingdom.

As the three heroes, Rama, his brother Lakshman and Sita, returned home, people lit candles to guide their way in the dark. In honour of this, on the second day of Diwali people light candles in their homes to guide Lakshmi, in the hope that she will bestow good fortune on their home for the coming year.

After worshipping Lakshmi on Diwali, many Hindus gamble and spend profusely, believing that Lakshmi has bestowed good fortune upon them.

In addition to this, two days before Diwali, a festival called Dhantares is celebrated to seek more blessings from her. During this time Hindus buy gold and silver and start new business ventures.

Hindus worship Lakshmi at home as well as in the temple. Friday is believed to be the most auspicious day for her worship.