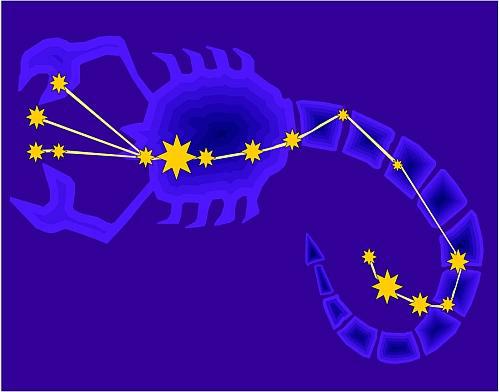 The Meaning Behind the Scorpio Zodiac Symbol

The story behind the constellation in Scorpio mythology has many possible origins, but the one that is most often referenced is the story of Scorpio versus Orion.

Orion was a giant hunter, some say the son of Poseidon (Greek mythology), the god of the sea. He was considered a great hero, but he had a way of pissing off the gods that both became his undoing, and created the constellation Scorpio.

The primary story goes that Orion was the lover of Eos (Greek mythology), the goddess of the dawn, and bragged about his conquests with her. This of course, made her angry. Then Orion bragged about how he was such a great hunter that we was going to kill every creature on earth.

Normally in Greek myths this is the point where Artemis (Greek mythology), the hunting goddess, would take offense to anyone claiming superiority in hunting skills, and cut them down to size. The only thing was that Artemis had a big time crush on Orion and actually found him charming. Her brother, Apollo (Greek mythology), the sun god, did not find this claim quite so amusing, as he was also the god of the animal herds. Neither did Gaia (Greek mythology), the earth goddess, for obvious reasons.

So Apollo and Gaia talked and decided that it was time for Orion to go, so Gaia created a giant scorpion to hunt the hunter. This is where Scorpio mythology essentially begins and ends. Orion pretty much knew he was screwed, so he ran, and Scorpio chased him.

Depending on which myth you want to go with, either Scorpio killed Orion, or Artemis accidentally shot Orion in the head thinking she was shooting Scorpio. Either way, Orion died.

Zeus (Greek mythology), once again inserting himself at the tail end of a myth, had been watching the whole thing and put both Orion and Scorpio in the sky as constellations, but placing them 180 degrees apart so that they wouldn't keep fighting in the heavens.

This doesn't give us that great of a look at Scorpio himself. This myth pretty much is all about Orion, and Scorpio gets to be a bit player in his own mythology. Not exactly a tale befitting a major zodiac symbol.

Interestingly, the Scorpio zodiac symbol is often depicted in several different forms, including the shape of an eagle and a serpent, as well as a scorpion.

Unrelated to Greek mythology, these symbols immediately bring to mind the Mexican coat of arms, which depict an eagle devouring a snake, perched upon a cactus. This was the symbol that signified where the founding of Tenochtitlan would be. It is interesting also that if you consider the eagle devouring the snake as Scorpio devouring Scorpio, this coincides well with the fact that a scorpion, when cornered with no means of escape, will sting itself to death.

There is little reason to believe that ancient Greek and ancient Aztec myths share any sort of origins, but it does add a layer of interest to the otherwise short tale of Scorpio mythology.

Scorpio Mythology, What is it about?

Scorpio is among the earliest of zodiac signs. In the beginning, Scorpio heralded the coming of fall to the ancient Mesopotamia.

Scorpio Mythology has an assortment of stories connected to it however, the constellation Orion figures in them all.

In this Scorpio Mythology legend, Orion the hunter, was a Grecian goliath of a man, who wasn't only the most gorgeous man in the world, he was as enchanting as honey to women.

In many translations, Apollo directed the scorpion to go after Orion.

Apollo was envious of Artemis' attraction to Orion, not to mention defensive of his sister's virginity. Apollo helped Artemis (AKA- Selene/Luna/Diana/Hecate/Trivia) in placing Orion's constellation in the heavens. Apollo felt contrite and wanted to ease his guilty conscience. Even so, Scorpio was also put there, and like clockwork when Scorpius comes out in the night's sky, Orion begins to drop away to the opposite side, forever hightailing it away from the scorpion.

In yet another Scorpio Mythology version, Artemis kills Orion by mistake.

Eos, (Greek the goddess of dawn) liked to amass notches on her headboard of good-looking young bucks she conquered. Eos invited Orion to her bed, and he happily consented. While hanging out with Eos, Orion tooted his horn bragging how he was the greatest hunter and could kill all of the savage creatures that ever walked. Apollo, who's duty was to defend animals, was swayed by Gaia/Gaea/Ge (Goddess of Earth AKA Hera), to send off a gargantuan scorpion with thick skin to bite the Hunter to death. Orion attempted to elude the scorpion by going into the sea. Artemis was in love with Orion and wanted to save him so she discharged her arrow trying to shoot down the scorpion that was going after Orion. Artemis was a brilliant shooter and hit something black that was bobbing up and down in the sea. The tragic irony was, instead of killing the scorpion, Artemis shot Orion and he died in a flash. Afterward, the lovelorn Artemis committed Orion to the heavens as a constellation. There the gargantuan Scorpius, tracks Orion forevermore.

In another variant of the Scorpio Mythology, Artemis herself dispatched the scorpion to do away with Orion. The grounds for this alteration changes according to the myth involved. Some myths tell of Artemis being furious because Orion got the better of her.

In some Scorpio Mythology versions, Artemis sent Scorpio to assassinate Orion because he bragged about how good he was at killing animals for fun (Artemis believed in hunting only for food).

Orion had gone to Krete or (Crete) to hunt and pass time with Artemis and (her mother) Leto. While there, Orion started talking of exterminating every creature on earth. Artemis and Leto charged a venomous scorpion of great size to bite and eliminate Orion. Orion and the scorpion had a great battle, even Zeus took notice of it. After the fight, Zeus raised the scorpion to the heavens as a commemoration of what had happened. At Leto's and Artemis' urging and also for being virile, Zeus put Orion among the stars too. Orion is up there to function as a record of what can happen when humans don't learn to moderate their undue pride and swelled heads.

After a casual encounter, Orion fell in lust and started chasing the Pleiades or the Seven Sisters : (Maia, Electra, Alcyone, Taygete, Asterope, Celaeno and Merope) along with their mother all over the Earth. The parents of the Seven Sisters were Atlas - a giant and Pleione- the Oceanid. Artemis directed the scorpion to defeat Orion because she didn't appreciate his intrusions on these women. Artemis was hurt by Orion’s pursuit of the women. No one knows why; it is said they weren’t angels when it came to men. Perhaps it's because they were her friends…

There is yet another conflicting Scorpio Mythology legend that involves the Pleiades...

In this version, the Pleiades were pure and virtuous friends of Artemis.

While hunting a deer, Orion snuck up and interrupted the sisters. The girls took off horrified. Orion's passions were flared by their ravishing elegance. Orion chased them persistently; he was a hunter after all. Overwhelmed by this, Artemis begged Zeus to step in. Zeus was ironic, but he did help. As Orion caught up with the girls, Zeus changed the sisters into doves and they flew away from Orion. Here lies the irony - Zeus not only saved the Sisters from Orion he took them away from Artemis too. Artemis was infuriated by this double diss and she retaliated against Orion. Artemis went to her brother Apollo, who had been insulted by Orion's hunting skills (a mere human). Artemis convinced Apollo to put the atrocious scorpion on Orion's trail. Zeus would not be bested so easily and in a show of his grim humour, Zeus set Orion in the skies in a futile chase of the Pleiades for infinity. The Scorpion is also up there tailing Orion for all time. Even in being sarcastic Zeus had pity for his girl (Artemis- the Moon Goddess), so the path of the Moon in the sky goes by the Pleiades. Therefore, Artemis would have comfort in being reunited with her friends repeatedly.

No matter what Scorpio Mythology version you like, the never-ending "chase and kill" part of Orion's life and death play out repeatedly. Orion is opposite Scorpius in the sky, so as the scorpion arrives on the scene, Orion "dies" by dropping out of sight.

While Orion and the scorpion are united forever in these tales, the constellation of Orion is always on the polar opposite side to where ever Scorpio the Scorpion is. The proposition that the two remain apart serves as a caveat to preclude any renewal of the feud. So in the end Scorpio and Orion are located nearly 180° away from one another to avert problems.

© 2011-2022 crystalwind.ca. All rights reserved. We track all IP addresses with sniffer technology. Using a VPN will not hide your IP.