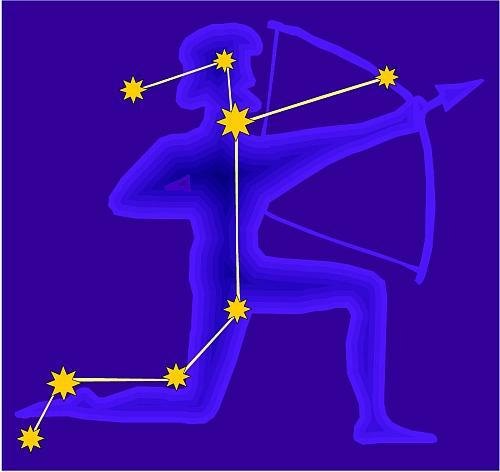 Other than Virgo, the Sagittarius myth is probably the most commonly misinterpreted of all of the constellation myths.

Most interpretations conclude that the mythology of Sagittarius refers to the centaur Chiron, who was accidentally shot by Hercules (Greek mythology) with a poison arrow. This story does indeed refer to a constellation myth, but it's actually the myth behind the constellation Centaurus, not Sagittarius.

The myth behind Sagittarius actually refers to Crotus, a satyr that lived on Mount Helicon with the Muses. Satyrs have human heads and torsos with goat legs (and sometimes horns).

Crotus, much like Chiron, was a skilled musician and hunter. He even invented the bow, according to Greek mythology.

It's easy to see why the myths behind Centaurus and Sagittarius often get confused. Crotus and Chiron share a lot in common. Both centaurs and satyrs were well known to be wild, rowdy, lustful creatures that had little respect for authority and proper manners. Crotus and Chiron were both exceptions to their races, being instead gifted in the arts and sciences and were knowledgeable and polite to humans. They both were known to hunt with a bow and arrow (though this is a bit misleading as centaurs did not traditionally use a bow and arrow. Satyrs did.) They also look a lot alike. They have the head and torso of a man, but the bottom half of a hoofed beast. Satyrs have two legs while centaurs have four.

Why Chiron gets credit as the figure in Sagittarius mythology is a bit of a mystery. Most likely it comes from different cultural interpretations of the constellations. One could easily interpret the shape as that of a half-man/half-horse instead of a half-man/half-goat. It's just a matter of which stars you think go with which other ones.

Whether you think Sagittarius is based on Chiron or Crotus doesn't really matter, I suppose. Both creatures were very similar to one another and the general meaning of the Sagittarius myth remains the same, regardless of whether you think its representative had two legs or four.

What is Sagittarius Mythology about?

In mythology, Centaurs were hard drinkers, unreliable, misleading, crude, wild, and adulterous. It is good to remember the reason why Sagittarius is a centaur in the first place. However, there was one Centaurus called Chiron and he wasn't like the others. Chiron was the son of Philyra and Saturn.

Chiron was as openhearted, docile, and sensible, in contrast to the other centaurs that were hateful, savage, and thoughtless. Chiron was trained by the Sun god Apollo and Diana (Artemis), Lunar Goddess and Goddess of untamed creatures. Chiron was supposed to have altered himself into a buck to evade his green-eyed wife, Rhea. The ancient Greeks considered centaur diplomatic, adventuresome and fearless. In all legends, Chiron was remembered in the constellation of The Centaur, or in a few adaptations, Sagittarius.

Sagittarius mythology also figures in the tale of Orion and the Pleiades...

When Zeus agreed to grant Orion constellation status, Zeus placed Orion away from the Seven sisters. This way Orion could pursue all he wanted but never have the fortune of catching up with them. Along with the Sisters, Scorpio is positioned so that it keeps an eye on Orion. Along with the Sisters and Scorpio the Scorpion, Sagittarius the Archer is directed towards the scorpion, with its bow targeting Scorpio's heart, just in case he tries to go after Orion again.

Another Greek Sagittarius Mythology tale tells of how Sagittarius the Archer was directed to shoot down Scorpio the Scorpion, while Scorpio had been sent off to murder Orion. This story gives the reason why the Archer's arrow is aimed toward the ‘heart of the scorpion’.

Greek Sagittarius mythology also talks of Crotus, the son of Pan (the goat god) and Eupheme (nursemaid to the Muses).

Crotus developed into a skilled huntsman, who had an artist's soul. Crotus grew up with The Muses, so they implored Zeus to award Crotus with his own constellation that matched to his distinguished gifts.

As stated in the Greek myths, Chiron the Sagittarius Centaur was tempestuous and untamed but very sensible. The Grecian gods and goddesses loved Chiron. So much was he loved that the monarchs of Greece would send off their boys to be taught by Chiron. In addition, Chiron and the god Apollo were allies. Apollo shared his knowledge of archery with Chiron. Chiron wasn't just an instructor; he was a philosopher and a recluse. Hercules, Achilles, Jason, and Asklepios or (Aesculapius) were amongst his students; they became skilled at practicing medicine.

In one Sagittarius Mythology tale; Hercules went on a very long trip one day and needed a drink to quench his thirst.

So Hercules asked a friend to open some wine that his friend kept there. The sad thing is this wine was first-class wine and it belonged to the centaurs collectively. Hercules' friend opened the wine and the perfume of the wine started to effuse in the air. All the centaurs violently galloped to the friend's home and demanded to know why the friend presumed to open the wine without asking for their permission. The centaurs set out assaulting Hercules and his friend. This turned out to be a huge misplay, because Hercules shortly fixed the issue by obliterating several of the centaurs and scaring the remainder away, as they galloped away he ordered them “never come back”. While Chiron hadn't participated, he was close by and kept an eye on the whole thing.

Though Hercules knew Chiron, and had a profound regard for him, from a distance he couldn't make out his ally. Lamentably, Hercules hit Chiron with a poisoned arrow, and the injury was fatal. There was no hope because the arrow was doused in the venom of the Lernaean Hydra Snake. Chiron was in outstanding pain and anguish, there was no medication that would ease the infliction. The fact was, even the gifted physician Chiron couldn't heal himself.

The next problem was that Chiron was in torment but immortal. Chiron was not able to obtain freedom from the pain with the onset of death. In such a scenario, Chiron volunteered himself as a replacement for Prometheus. Day-after-day an aquila descended and polished off his liver, which grew once more as it got dark ...only to be consumed by the eagle once again. Prometheus had been penalized by the gods for giving fire to humankind; his punishment was to be enchained to a giant stone. So in essence, Chiron forfeited his eternal life so man could use of fire.

Hercules had been appealing to Zeus (Jupiter) for help, and Hercules agreed to supply an appropriate replacement for Prometheus, thereby setting him free. Thus, Chiron replaced Prometheus, gave up eternity, and went to Tartarus in Prometheus' stead. Zeus witnessed everything that happened and he knew how deplorable his son Hercules felt. Zeus afforded the dear Centaur a resting place in the heavens, as the constellation Sagittarius the Archer, in recognition of his benevolence and perpetuity.

Enkidu was a close friend of Gilgamesh of Uruk---thought to correspond with Orion. Enkidu attempted many life-threatening pursuits with Gilgamesh.

In the Epic of Gilgamesh, Nergal is the god who rules war, and is found on 2 cuneal inscriptions. Nergal's name, in Sumerian, means, "Lord of the Great dwelling"-- i.e. the Underworld. Nergal is one of the 7 deities to whom they made offerings of sheep and cattle. Nergal was envisioned as the god of pestilence, and devastation.

These tales supply a good depiction of this god. However, Hammurabi (c.1818 – 1750 BC), the great lawmaker - who had a set of laws called Hammurabi's Code, said that Nergal was "the champion without a challenger who brought triumphs". Because Nergal brought him victories over those who'd resist his "Code".

The Grecian icon of Sagittarius is what we know, only this icon of the one-half man one-half horse Centaurus, is a basic adaptation of the Babylonian deity Pabilsag. Pabilsag's look contains several complex characteristics not interpreted in the Greek icon. Pabilsag had a scorpion's tail, a dog's head and wings. In other variants the characteristics are altered, the dog's head or wings could be overlooked all together, while in other icons bird like feet supplant the scorpion's tail.

Although there is a substantial deviation in what our idea of The Archer is, in one respect, several things the Babylonians thought about Sagittarius the Archer are still considered now.

We have 1344 guests and no members online