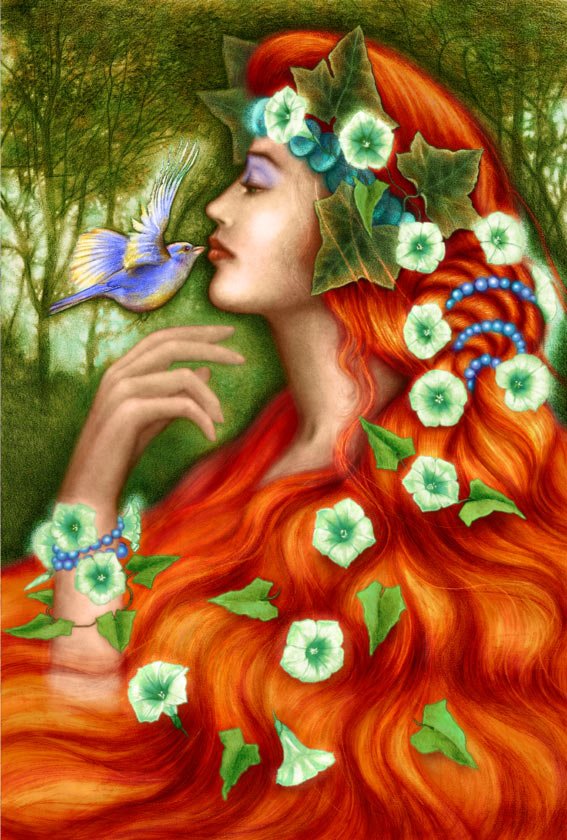 Mnemosyne, Goddess of Memory and Mother of The Muses

Mnemosyne, Greek goddess of memory, was considered one of the most powerful goddesses of her time. After all, it is memory, some believe, that is a gift that distinguishes us from the other creatures in the animal world. It is the gift that allows us to reason, to predict and anticipate outcomes, and is the very foundation for civilization.

Sadly, the goddess Mnemosyne is largely forgotten, lost in the mists of time. When she is remembered it is usually only in the context of her being the mother of the Muses, though all acknowledge that without memory the lively arts of the Muses would never have been possible.

Mnemosyne was a Titaness, a daughter of the first generation of deities in Greece. Her parents were the rulers Cronus and the goddess Gaia.

Mnemosyne is usually depicted with a full mane of luscious hair, often a rich auburn in color. There are few stories about her even though she is often mentioned by the ancient poets who recount her awesome gifts to mankind.

The goddess Mnemosyne is sometimes credited with being the first philosopher, her gift the power of reason. She was given responsibility for the naming of all objects, and by doing so gave humans the means to dialog and to converse with each other. The powers to place things in memory and that of remembrance were also attributed to this goddess.

Make no mistake about this. Memory was of the utmost importance at the time of Mnemosyne. Long before the invention of the alphabet and the written word, it was critical to the well-being of an individual or a society who had to rely solely on the lessons passed on in an oral history.

Besides, we're not talking about memorizing shopping lists or the times tables here. The memory of Mnemosyne was much more than that -- it was the memory of the rules and energies of the universe, the cycle of life, the memory of how to live in the world.

Those who chose to forget had to be reborn, to return to earth to learn the lessons they needed. Those who had chosen to remember were admitted to the Elysian Fields where they would spend eternity in comfort and peace.

The esteem in which the memory was held was made clear in the initiation rites of the ancient gnostics, who were required to consult with an oracle.

Before being brought to the oracle, initiates were taken to a place with two pools lying next to each other. They were instructed to first drink from the pool of Lethe, the goddess of forgetfulness, in order that they might forget their previous lives. Then they were taken to the spring of Mnemosyne to drink so that they would remember all that they were about to learn from the oracle.

The initiate would then be 'buried alive' (i.e., placed in seclusion) for a few days in the 'tomb' of the earth god, Trophonios to await the arrival of the oracle. If the initiate had been properly prepared and was found worthy, the mysteries of life would be told to him by the oracle. And when he was brought back into the realm of the living, the priests would set him upon a special seat, called the Throne of Mnemosyne. While seated there, he would remember and tell all that he had learned below.

Once an important goddess in her own right, Mnemosyne is largely remembered today in her capacity as the mother of the Muses, the nine Greek goddesses whose role it was to inspire poets and musicians and to promote the arts and sciences.

After Zeus led the war against the Titans and established himself as the leader of the Olympians, he feared that, even though he might be immortal, his great victories and decisions might soon be forgotten.

Longing for a way to preserve the memory of his many great feats, he dressed as a shepherd and went to find Mnemosyne. They slept together for nine nights before he returned to his home on Mount Olympus. (By the way, Zeus was still single so this was not one of his famous extramarital affairs.)

Zeus got his wish. Months later Mnemosyne gave birth for nine days, each day delivering a daughter. Collectively they were known as the Muses and were described as "having one mind, their hearts set upon song and their spirit free from care".

No banquet on Mount Olympus was complete without them. Seated near the throne of their father, they entertained the guests, singing not only of the greatness of Zeus, but about the marvelous feats of the Greek heroes and the creation of the heavens and the earth and all its wondrous creatures.