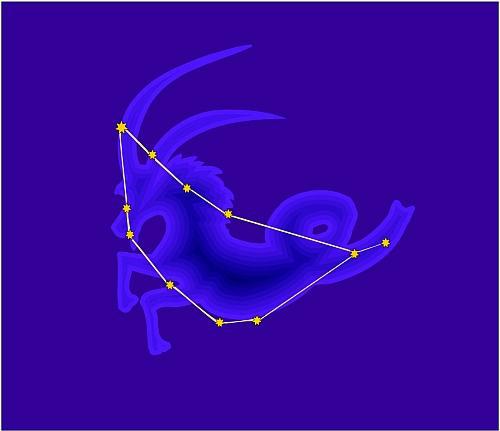 The Story Behind The Capricorn Constellation

The origins of Capricorn mythology were practically unknown until the Scriptures of Delphi were discovered. Now we finally know the lost myth behind one of mythology's most mysterious constellation myths.

The Capricorn zodiac sign is often interpreted as being either a goat or a sea-goat, which is basically a creature with the front half of a goat and the tail of a fish. In actuality, both goat and sea-goat are appropriate symbols to represent Capricorn mythology.

The story behind the Capricorn zodiac sign begins with the sea-goat Pricus. Pricus is the father of the race of sea-goats, who are known to be intelligent and honorable creatures who live in the sea near the shore. They can speak and think and are favored by the gods.

Pricus is tied to Chronos (Greek mythology), the god of time. Chronos is the creator of the immortal Pricus, who shares Chronos's ability to manipulate time.

The legend that ties Pricus to Capricorn mythology begins when the younger sea-goats, Pricus's children, find their way onto the shore. The sea-goats seem to be naturally drawn to the shore. They can use their front goat legs to pull themselves onto the beach and lay in the sun. The longer they stay on shore, though, the more they "evolve" from sea-goats into regular goats. Their fish tails become hind legs and they lose their ability to think and speak, essentially becoming the goats that we know today.

This upsets Pricus a great deal. As the father of the sea-goat race, he is determined to make sure that his children never get to the shore. If they do, he fears they will become mindless animals who can never return to sea.

After losing several of his children to the land, Pricus decides to use his ability to reverse time to force his children to return to the sea. During this time reversal, everything on earth, except Pricus, reverses itself to where it was previously, thus the goats revert back to the time to before they returned to land.

Pricus, being unaffected by the time shift, is the only one who knows what is to become of the sea-goats. He tries to warn them, even forbid them from setting foot onto the shore, but no matter what he does, or how many times he reverses time, the sea-goats eventually still find their way onto land and become regular goats.

The pivotal moment in Capricorn mythology occurs when Pricus finally realizes that he cannot control the destiny of his children, and that trying to keep them in the sea will never work, no matter how many times to tries to "start over". He resigns himself to his loneliness, and chooses to no longer reverse time, instead letting his children live their lives out to their own destiny.

In his misery, Pricus begs Chronos to let him die, as he cannot bear to be the only sea-goat left. Chronos instead allows him to live out his immortality in the sky, as the constellation Capricorn. Now he can see his children even on the highest mountain tops from the stars.

Capricorn Mythology, What is it about?

Capricorn Mythology in ancient Sumeria was associated with the planet Saturn and the Mesopotamian god Enki.

The goat-fish is a representation of Enki, seen on Babylonian monuments.

Enki was a god in Mesopotamian legend; later Enki became Ea in Babylonian legend. In the beginning, Enki was the main supreme being of the metropolis of Eridu. Later Enki's cult influence circulated from end-to-end of Mesopotamia (north-central Anatolia -- (Hittites) and Northern Mesopotamia--- (Hurrians)....

Enki was the god of artisanship (gašam); water, saltwater, lake water (a, aba, ab), intellect (gestú, meaning "ear") and creative activity (Nudimmud). In ancient Babylonian legend Capricorn was described as the "deity Ea", who was fishtailed. Ea was the “Antelope of the Sea”.

Capricornus is recognized by the name the “Gate of Death” (polar to the Cancer sign, “Gate of Birth“). Capricorn relates to the time the Sun embarks the tenth part of its orbit and to the time of new knowledge. Ea is perceived as coming up from the oceanic abyss to teach humanity the wisdom of the gods. The Capricorn zodiac sign is called "šaxû ibex" in Babylonian. The sun in that month moved into the "suxûru" or fish constellation, which is called the star of Tashmetum. Tashmetum is a goddess of Akkadian mythology. Tashmetum is the wife of the deity Nabu....Nabu is the god of wisdom and writing in Babylonian Legend. Babylonians revere Nabu because he is the son of Marduk (or Merodach) and his wife, Sarpanitum. In addition, Nabu is worshiped since Enki/Ea is his grandfather.

However, the whole depiction of Capricornus as we know it now derives from the Greeks.

In Grecian mythology, the Capricorn Mythology begins with Cronus who was a giant, and the Father-God of the deities. Even as Cronus brought down his own father named Uranos, Cronus realized one of his own children would subvert him.

Thus, when each of his and wife Rhea's babies were born, he ate them whole. Hestia, Demeter, Hades, Poseidon, Hera, altogether, swallowed before they could mature and jeopardize his dominion.

Rhea wanted a child, so when Zeus was born into the world, Rhea hid baby Zeus in a cave and placed him with surrogate parents. Then Rhea draped a stone in swaddling clothes and fed that to Cronus. Thus sparing Zeus the same fate as his sisters and brothers.

There are other variations of this legend. In another variant, a goat-tending nymph called Amalthea or Adamanthea brought up Zeus.

Yet in another version of this myth, the actual goat itself named Amalthea brought up Zeus.

However, the one thing that never changes in all the stories is that Zeus suckled on goat’s milk, or ambrosia in some versions.

When Zeus was more grown up, he freed his uncles by Cronus, who were held captive -- the Titans (powerful deities who were elder gods) and the Cyclopes (a primordial race of giants, each with a single eye in the middle of its forehead) --

The Titans and Cyclopes gave Zeus great power over thunder and lightning.

With the Titans and the Cyclopes assisting, Zeus brought down Cronus, and pressured him to cough up Zeus' brothers and sisters, Hestia, Demeter, Hades, Poseidon and Hera.

To continue the story, Zeus then placed Amalthea or Adamanthea in the heavens (this is called Catasterismi in Greek which means: placing amid the stars) in thanks, as the constellation Capricornus, the Goat. The horns from Amalthea the goat later became the Horn of Plenty, or Cornucopia. Ancient sources say that Cornucopia comes from the sun "taking nourishment" in provision for its ascent north.

Additionaly, Capricorn Mythology is linked with the Saturn and the god Aristaeus.

In some adaptations of the Capricorn Mythology, the goat's skin is the Golden Fleece that Jason and the Argonauts sought out and stole.

Yet in another custom Capricorn stands for the deity Pan-the goat god who metamorphosed into a sea animal.

One legend says, when Pan was being assaulted by Typhon, Pan plunged himself into the Nile River; the parts above the river water stayed goat, however the parts below the water changed into a fish. Even now, the Capricorn constellation is portrayed as a sea-goat, (a goat with a fish’s tail).

The constellation is known as Capricornus. Saturn rules Capricorn, and its symbol is the goat. Capricorn is also shown as a hybrid sea animal or Dolphin.

Capricorn from the Latin (Capricornus, literally meaning, Goat-Horned), directly translated to Greek (Aigokeros)-- Goat-Horned, from the words aigos or aix a goat and keros a horn,translated to Akkad (Suhu-massa), translated to Sumerian (Suhur.mas), both Akkad and Sumerian meaning the Fish-Goat.

From Mesopotamia we get the early representations, and some of the current ones, drawn as a half-goat, half-fish.

We have 878 guests and no members online