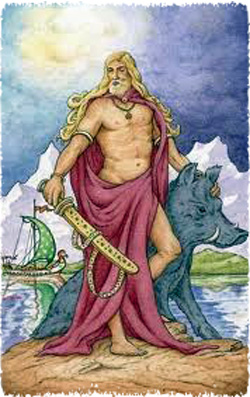 Freyr is a very important god in Old Norse religion; not so much in Norse mythology as one might suppose, for there he actually appears in only one story, but very much in the cult.

Freyr is a member of the Vanir, the male fertility god and god of love. He is normally the brother to Freya and son to Njord. Along with Odin and Thor he was one of the most popular gods, and received many offerings - according to Adam of Bremen, these three gods had their images in the temple of Upsala. Freyrs servant, Beyla, was the goddess of bees and/or dairy. He also had a boar named Slídhrugtanni or Gullinborsti, and a ship named Skidbladnir (Skídhbladhnir), built by Dvalin, a Norse dwarves/dwarf.

Snorri Sturluson describes him as being handsome, powerful, merciful and kind, and calls him "God of the World" (veraldar góð). Freyr has control of the weather, both rain and sunshine, thus the fertility of the earth. Prayers were also offered to Freyr for a good future, peace and prosperity.

As a fertility god, Freyr was often depicted with a prominent sexual organ; his cult included songs and actions which shocked contemporary and later Christians, who condemned them as indecent, which they of course were not to the participants in the cult themselves.

After the war between Aesir and Vanir, Freyr together with his father and sister were sent to the former as peace hostages (and these three are actually the only Vanir, in the strict sense of the word, known by name).

Freyr lived in Álfheim, "Elf-home", a name which indicates a possible connection between Vanir and Elves, possibly with his wife, the giantess Gerd (Gerð)—if she is his wife; the myths are not quite clear whether their union was a lasting marriage or just a temporary meeting.

He saw her first when he sat on Odins throne, Hlidskjálf. He looked north, saw Gerd and fell so much in love that he was no longer able to speak or eat or sleep. Freyrs henchman, Skírnir, went to Jotunheim where Gerd lived and brought her to Freyr. As a reward, Skirnir was given Freyrs sword which fought by itself.

That would not have been too bad, since Skirnir was after all on the right side; but shortly afterwards, the sword had to be given to the giants as payment for Freyrs privilege of meeting Gerd (and even then only after Skirnir had menaced Gerd with the most extreme suffering both in this life and the next, if she didnt agree). As a consequence, Freyr has no sword with which to fight, and he will die at Ragnarok (at the hands of Surt), possibly killed with his own sword, when the world ends. This courtship is dealt with extensively in the poem Skirnismal/Skírnismál.

We have 795 guests and no members online