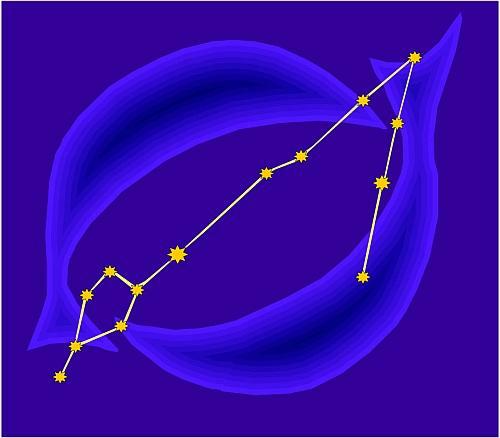 The Mythology of Pisces

By most accounts, the mythology of Pisces follows a single legend:

In this Greek myth, the monster Typhon descends upon Mount Olympus, threatening all of the gods and goddesses, who flee from their home (with a couple key exceptions). As Typhon approaches, Aphrodite (Greek mythology) and her son Eros (Greek mythology) [a.k.a. Venus and her son Cupid (Roman mythology)] find themselves in need of escape.

Here's where you get to choose your own adventure. According to different versions of this legend, either Aphrodite and Eros turn into fish, two fish approach them and swim them away to safety, or they turn into fish AND two other fish take them to safety. Whichever version you prefer, truth be told, it doesn't really matter. One way or another, the two escape from Typhon thanks to two fish.

These two fish were later honored by being placed in the heavens as the constellation Pisces. It is for this reason that I tend to believe that there were two fish who were not Aphrodite and Eros, since during Typhon's assault on Mount Olympus, the other gods turned into animals as well, and were not turned into constellations.

Note that the mythology of Pisces always refers to two fish, never one. Most versions of the Typhon escape legend speak of the tails of the fish being tied together to avoid losing each other. The constellation of Pisces represents two fish with their tails tied together.

A similar version of the story is told in Syrian mythology, where two fish known as the "Ikhthyes" (or "Ichthyes") were the ones who rescued Aphrodite and Eros. Later, a different Syrian myth tells of a large and mysterious egg appearing on the Euphrates river, where two fish (or possibly men with fish-tails according to some classical art) named Aphros and Bythos who brought the egg to shore and helped it hatch. Inside the egg was Aphrodite (as her Syrian counterpart Ashtarte).

Both stories have to do with some form of fish rescuing some form of Aphrodite via the river Euphrates. In both myths, the helpful fish were made into the Pisces constellation. It is believed that this legend is the reason why Syrians refused to eat fish.

Lastly, there are often questions as to the relevance of the mythology of Pisces in reference to Christian mythology. The fish is often used in Christian symbology to represent Jesus Christ. This is typically in reference to the tale of the "Loaves and Fishes Miracle", rather than to the Pisces myth.

Pisces Mythology, What is it about?

In Pisces Mythology, Pisces has always been the fish.

Even today, many depictions of Pisces show two fishes bound together with a cord or two fishes with a line or bar joining them as one.

According to another version, The Ikthyes (or Ichthyes) were a pair of large Syrian river fish who rescued Aphrodite and Eros when they were fleeing from Typhon.

It is also said that these fish attended to the birth of Aphrodite by carrying Aphrodite onto land after she was born in the sea. Still another myth says that Pan the goat god changed into a goatfish (Capricornus) and leapt into the river to salvage Aphrodite and Eros.

In all these renderings of the narration, the fishes were committed to the stars as the Constellation Pisces.

Both the Sumerians and Akkadians have a similar meaning to their words and these definitions answer for the mutual icons of Pisces as 2 fish connected by the fins.