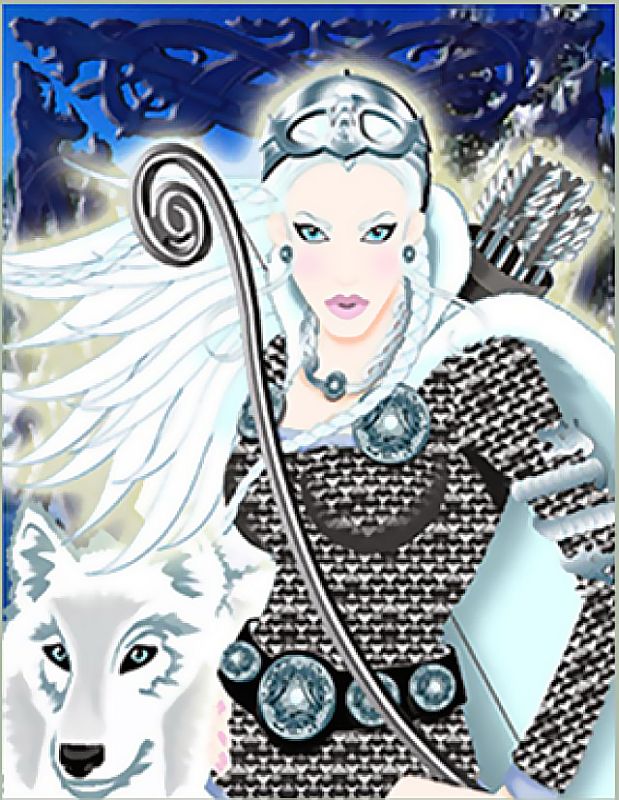 The Viking goddess of winter, Skadi is the embodiment of strength, courage and endurance. She embraces this period of storm, darkness, and challenge, and is never happier than when hunting or skiing in the snowy mountains.

The daughter of the giant Thiazi, Skadi was born into the heroic, mythical world of Asgard, the heavenly home of the fierce Norse gods and of slain heroes. (Richard Wagner’s famous operatic Ring Cycle tells some of their stories.) Tall, beautiful, and a formidable warrior and hunter, the goddess was a force to be reckoned with. Determined to avenge the death of her father, who had been murdered by the gods for abducting Idunn, the beautiful goddess of youth, she stormed their citadel to exact either revenge or compensation for her loss. Before this onslaught of a ferocious one-woman army, the gods backed down.

Rather than fight her, Odin, the one-eyed king of the gods, offered her gold for her pain and suffering. But Skadi was already rich from the pillaging and plundering spoils of her father and grandfather. Instead, she demanded a husband from among the gods, and a good laugh as well. (She hadn’t laughed once since the death of her father.)

Secretly in love with Baldur, son of Odin, and the god of light and beauty, Skadi chose the most attractive set of feet, believing them to be his. Unfortunately, she guessed wrong. Instead of the handsome Baldur, she picked the homely sea god, Njord. Loki, the Trickster, provided her laugh at great personal expense. But the laugh was really on Skadi. She didn’t get her heart’s desire. Still, she kept her word, and stoically went through with the marriage. It was doomed from the start.

Njord liked to live beside the sea; Skadi was happy only in the mountains with her beloved wolves. The mismatched couple compromised by taking turns. They lived for nine days each, first beside the water, and then in the mountains. But they were miserable. At the end of eighteen days, they separated for good, and Skadi returned to her snowy heights in Thrymhein. Happily, there she met Ulle, god of winter, archery and skis. He was also the god of justice and dueling. The soul mates thrived on a life of proud independence in the wild mountains. Little else is known about their life together.

There is a dark side to Skadi, as there is in the winter weather that she loves.

She is stormy and unpredictable, relentless in her pursuit of what she perceives as justice. She will stop at nothing to achieve her objectives. But she has passion and integrity, and the determination to live life in all its fullness, regardless of the harshness of her circumstances, or of the feelings of others about her.

She knows how to survive in a tough climate, how to provide for herself and her loved ones. She loves winter because it calls forth the best in her. It demands her strength and courage, not her weakness. It calls on her patience, and her understanding that there is a cycle of seasons in life, and that winter is an essential part of that cycle.