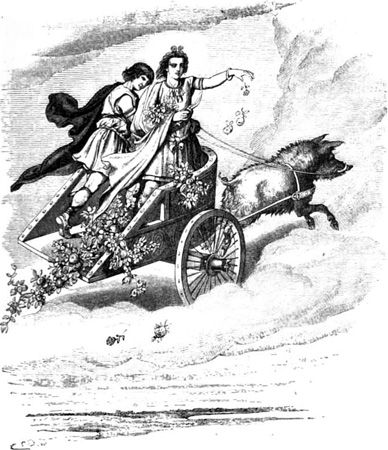 Freyr is the god of fertility and fruitfulness. He is the noblest of the gods. Together with his sister, Freyja, he brings peace and prosperity to men and the blessings of fertility to the home and the field. The Norsemen made sacrifices to Freyr til árs ok fridar (for frutifulness and peace).

Freyr is the son of Njord by Njord's own sister. He is of the race of the Vanir. At the end of the war between the Æsir (the Warrior gods) and the Vanir (the Fertility gods), hostages were exchanged. Freyr, with his father and sister Freyja, came to Ásgard, the home of the Æsir.

Freyr posses two great treasures made by dwarves: the boar Gullin-börsti with golden bristles, and the ship Skídbladnir, which is large enough to hold all the gods, but which can be folded small enough to fit in one's pouch.

The story of how Freyr wooed his bride is told in the poem Skírnismál. One day, Freyr sat in Ódin's chair Hlidskjálf, from where one can look out and see all the worlds. Freyr spied Gerd, the daughter of a giant, and was consumed with desire to wed Gerd.

Freyr, sick with love, asked his servant Skírnir to go to the hall of the giant Gymir, father of Gerd, to ask for Gerd's hand. Skirnir told Freyr that he would woo Gerd for him if the god would give him his horse and the magic sword as the price for his services. Knowing that the journey was likely to be dangerous, Skírnir took Freyr's horse, his sword, and gifts including golden apples of youth, a golden arm-ring, and Freyr's portrait captured in a drinking horn. By taking Freyr's sword, Skirnir had deprived Freyr of a great weapon against the fire-giant Surt, at Ragnarok.

The herdsman replied, "Are you doomed to die? Or are you dead already? There is no way in which you can talk to Gymir's daughter, now or ever."

Skírnir responded, "Those choices are better than just sobbing about it. The day of my death was fated long ago."

Hearing the commotion outside the hall, Gerd asked the servants to invite the visitor in for a horn of mead. Once inside, Skírnir began to advance Freyr's marriage proposal, presenting Gerd with the golden apples and other tokens of Freyr's wealth. She was uninterested. "No one is going to buy my love."

Skírnir resorted to intimidation, threatening to behead her with Freyr's sword, but still she was unmoved. "No coercion will make me change my mind."

Finally, Skírnir resorted to magic, with a torrent of terrifying threats, saying "I forbid this woman pleasure from any man. You'll live always amongst three-headed giants and never once sleep with a husband. Hrimgrimnir is the giant that will enjoy you in the gloom near Hel's gates. Foul corpses will give you only goat's piss to drink. That is the best drink there will be for you. That is my curse."

Gerd at last gave in, saying, "I never believed that I should swear love to one of the Vanir." She consented to the marriage and agreed to meet Freyr in a forest clearing nine nights hence.

Skírnir, taking his leave, returned to Ásgard. Freyr stood waiting to greet him. Skírnir told him the good news. But Freyr despaired. "One night is long. Two nights are longer. How can I bear three? A whole month is shorter than even half of such a pre-marital night."

The loss of Freyr's sword will be keenly felt at Ragnarök; Freyr will be killed with a single stroke from Surtr, the flame giant.