The Egyptian goddess Nut was a sky goddess who was married to Re, the creator god of the sun. The goddess Nut was widely known for her spectacular beauty and incredible kindness.

Nut's loving and generous nature was obviously extensive. It led into having affairs with Thoth, the god of divine words, and Geb, the god of the earth.

When Re discovered the goddess Nut's infidelity, he was furious with her. In his anger he pronounced a curse that Nut, who was pregnant at the time, would not give birth in any month of any year!

Desolate and despairing that she would never be a mother (not to mention that the endless pregnancy), Nut turned to Thoth for words of comfort.

What male can stand to see a woman cry? Not Thoth. He quickly soothed her by promising to find a solution to Nut's dilemma.

And this he did! With his divine powers of persuasion, Thoth persuaded the Moon to gamble with him.

The stakes were high. It was agreed that for each round that Thoth won, he would be rewarded with a bit of the Moon's light.

The games continued for months on end, and, eventually, Thoth had managed to win enough light to create five entire new days.

Nut wasted not a precious moment of those blessed days, giving birth to a different child on each of the five days. Hence, Nut came to be called the “Mother of the Gods".

Osiris who was born on the first day, Horus the Elder on the second, Set on the third, Isis on the fourth, and Nephthys the last born on the fifth day. The days on which these deities were born were known as the 'five epagomenal days of the year', and they were celebrated all over Egypt:

Horus the Elder - neither lucky nor unlucky

Isis - a lucky day, "A Beautiful Festival of Heaven and Earth."

Osiris was the son of Re and later became the god who was to rule all of the earth.

The Egyptian Goddess Isis, daughter of Thoth, was born on the third day.

Isis and Osiris loved each other deeply, even when they were still in Nut's womb. The myths of Isis and Osiris are among the most beautiful love stories ever told.

Ruling together as husband and wife they created the first great nation of Western civilization during what was called the "Golden Age of Egypt" (around 2,500 BCE).

The additional five days that Thoth had added to the solar year were spent in celebrations honoring the goddess Nut.

Festivals were held in late February, just before the new solar year began. And this is the story of how our years came to number 365 days.

The myths of the goddess Nut instruct us to never give up our hold on our precious dreams. She reminds us to persevere and to accept the help of others when we need it. 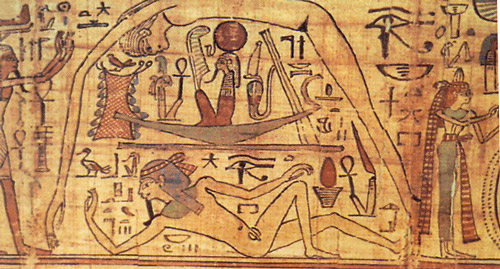