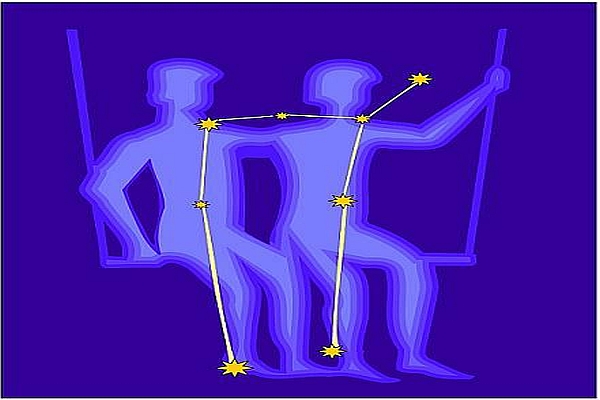 The origins of some constellation myths are heavily debated. Gemini mythology, luckily, is pretty straightforward.

The twins were young, handsome, and adventurous. They took part in many adventures together and were well known for their livelihood and curiosity. Castor was a renowned horseman, while Pollux was known for his great strength.

Their sister is the beautiful Helen of Troy, whom the great Trojan War is fought over. The twins not only took part in that war together, but were also Argonauts on the quest for the Golden Fleece.

Where Gemini mythology comes into play is when Castor, being mortal, finally dies. Having spent their whole lives together, Pollux is distraught. He doesn't want to live without his twin brother, but since he is immortal, there is nothing he can do. He begs his father, Zeus, for help.

Zeus decides that rather than killing Pollux so he can be with Castor, he makes Castor immortal also, and the two of them get to live together forever as the constellation Gemini.

Perhaps the reason that this story is rarely contested is because two of the actual stars in the constellation of Gemini are named "Castor" and "Pollux". This is a rare case where astronomy and mythology actually agree, and thus, Gemini mythology is born.

Gemini Mythology, What is it about?

Castor and Pollux were twin sons of Zeus and Leda; one was immortal, the other was not.

Together they are known as the "Dioscuri" or "Sons of Zeus." Although Leda was the female parent to both twins, each was fathered by different men.

Pollux was the son of the principal Olympian deity, Zeus, who had modified himself to look like a swan so he could engage the endearing Leda. So, Pollux was therefore immortal.

Castor was the progeny of Leda's spouse, Tyndareus, The King of Sparta, therefore mortal and fated to expire, much like all mortals.

Castor and Pollux were two of the Argonauts.

On the sailing trip, with Jason in the pursuit of the Golden Fleece, there was a raging and violent storm that endangered the job, however the storm died away when a couple of twinkling stars shined over the heads of Castor and Pollux.

From then on, mariners have petitioned the sidekick- brothers to shelter them from danger and the scary-spooky lightning event occasionally known as Saint Elmo's light or St. Elmo's fire. St. Elmo's fire has long been looked upon as the disembodied spirits of the twins toying with the sails. This phenomenon is believed by seamen to be a most auspicious augury.

Castor was an equestrian and Pollux was a boxer.

As the story goes, the men named Idas and Lynceus, were cousins of Castor and Pollux through their relative Poseidon (God of the Sea).

Poseidon was said to be Idas and Lynceus' father. The twins challenged Idas and Lynceus to a duel and they bumped off their rivals. However, during the battle Castor was fatally injured by Idas.

Overwhelmed with sorrow, Pollux tried to kill himself so he could be with his dear brother. Because Pollux was divine, suicide was not a possibility. So, Pollux implored Zeus to let him die as well.

Instead Zeus stationed their divine souls together in the heavens side by side.

Symbols of fraternal love...never to be parted again. In this Gemini Mythology story, Zeus placed them amongst the stars on the principle that they were chivalrous through their lives on Earth.

Still, this present came with strings attached. Zeus dictated that for the rest of infinity, the twins would have to switch between the lightness and the darkness...

They were to pass a day on Mt. Olympus and the following day in Hades or (Hell or Scheol or the underworld ).

* Note - Maybe this is why Gemini people seem to change from one day to the next, So much so they seems like twins.

Anyway, Icons symbolizing the Gemini constellation have been discovered on Greek and Roman money. The likeness of the twins was also discovered on Babylonian stones, as well as Babylonian charts of the skies. The Gemini twins were recognized as handsome and daring fellows, they immortalize the happy-go-lucky, vagabond life.

The twin’s dispositions were alleged to be vigorous and fickle, conceited, loquacious and inquisitive.

Teachings of the Masters: Five Senses