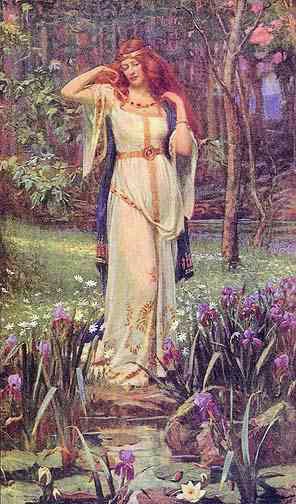 Freyja is the goddess of love. She is the sister of Freyr. Like Freyr, she is a Vanir, and was one of the hostages exchanged at the end of the war between the Æsir and the Vanir.

Perhaps a more accurate description would be to say the Freyja is the goddess of sex and lust. She is sought after by giants (the mason who rebuilds the Wall of Ásgard; by Hrungnir who duels with Þór; and by Þrym who steals Þór's hammer). Loki accuses her of being a whore in the poem Lokasenna.

In addition, Freyja is associated with war. She collects the chosen of the slain warriors with the val-kyrja after a battle. Half of them go to Ódin, while Freyja keeps half of them for herself.

Freyja travels in a chariot drawn by cats. She possesses a cloak made of the feathers of a falcon, which allows the wearer to fly. But Freyja's most treasured possession is her Brísingamen. This is a fantastically valuable piece of jewelry, but just what sort of jewelry is unclear from the surviving stories. The consensus is that it is a necklace. The story of how Freyja acquired the necklace exists only in fragmentary form today.

Freyja left Ásgard early one morning before dawn. Almost in a trance, she dreamed of gold. Loki noticed her and followed as she crossed Bifröst and traveled across Midgard. At the end of the day, Freyja came to a cavern. She entered the dark passage and walked down into the rocks. Loki followed. Passing through a narrow opening between two rocks, Freyja entered into the smithy of the four dwarves, Alfrigg, Dvalinn, Berling, and Grerr. Loki, undetected, watched through the opening.

Freyja was dazzled by the brilliance of the furnace. But then she saw the breathtaking work of the dwarves: a necklace of gold, twisting and weaving and incised with patterns. She had never seen anything more beautiful, nor had she desired anything so much.

She tried to buy the necklace from the dwarves. They said they had no need for more gold or silver. Freyja asked what price they would accept.

The dwarves conferred and said they would give Freyja the necklace if she agreed to spend one night with each of them. She consented.

Freyja spent four days and four nights with the dwarves. At the end of the time, the dwarves fastened the necklace of the Brísings around her neck.

Freyja returned to Ásgard, but Loki returned faster and headed straight to Ódin's hall and told him of Freyja's prostitution. Loki's smugness turned to fear when Ódin commanded Loki to get the necklace and to return with it.

Later that night, Loki boldly made his way to Freyja's hall, Sessrumnir. First, he tried the door, but it was locked. Using his shape-changing abilities, Loki turned himself into a fly. But he could find no crack big enough to admit him to the hall. Finally, he found an opening in the roof. Flying to Freyja's bed, Loki found the necklace clasped around her neck, with the catch under her neck and out of reach. Changing himself into a flea, Loki crawled across Freyja's sleeping figure to her cheek. He stung her. Freyja moaned, and rolled to one side, exposing the clasp of the necklace. Returning to his own form, Loki released the clasp and slid the necklace from Freyja's neck. Unbolting the main door of the hall, he boldly walked back out into the night.

When Freyja awoke, found the necklace missing, and saw the open door, she knew that only Loki could have been the thief. She also realized that not even Loki would have risked such an undertaking unless he had been commanded to do so by Ódin. What Freyja could not fathom was how her secret had been discovered.

She hurried to confront Ódin, saying he had debased himself if he had played any part in the theft. Ódin's anger was plain. He asked her how she could talk of degeneration when she had debased herself by selling her body to four foul dwarves.

Freyja stormed at Ódin, but he insisted that she accept punishment. If Freyja wanted to see the Brísingamen again, she must spread warfare and misery in Midgard. Freyja was instructed to stir up hatred between the sons of men and to stir up a war without end. "Whether they wish it or not, let men rip one another to pieces."

Freyja agreed to the condition.