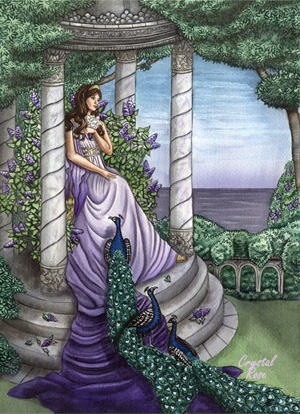 Hera, the Greek goddess called the Queen of Heaven, was a powerful queen in her own right, long before her marriage to Zeus, the mighty king of the Olympian gods.  The goddess Hera ruled over the heavens and the earth, responsible for every aspect of existence, including the seasons and the weather.

Honoring her great capacity to nurture the world, her very name translates as the "Great Lady". Our word galaxy comes from the Greek word gala meaning "mother's milk" . . . legend has it that the Milky Way was formed from the milk spurting from the breasts of the Greek goddess Hera, Queen of Heaven.  Where drops fell to earth, fields of lilies sprung forth.

She was also worshipped as the Roman goddess Juno, and the month of June (which is the most popular month for weddings) is named in her honor.

It is partly on account of Hera's great beauty, and particularly her beautiful, large eyes, that she is linked to her sacred animal, the cow, and also the peacock with its iridescent feathers having "eyes". The cow symbolizes the goddess Hera's nurturing watchfulness over her subjects, while the peacock symbolizes her luxury, beauty, and immortality.

In ancient times Hera was revered as being the only one the Greek goddesses who accompanied a woman through every step of her life.

The goddess Hera blessed and protected a woman's marriage, bringing her fertility, protecting her children, and helping her find financial security. Hera was, in short, a complete woman, overseeing both private and public affairs.

But it was Hera's uncommon beauty that attracted the attention of her future husband, the lusty Zeus, who tricked Hera into taking him to her breast by changing himself into a small, frightened and wounded bird that elicited her pity.

Once cradled in Hera's bosom, Zeus changed back into his manly form and tried to take her . . . but she resisted his advances, putting him off until he promised to marry her.  The delay only increased his desire for Hera and, once married, they had the longest honeymoon on record, lasting over 300 years!

Unfortunately, the goddess Hera's life was not to remain so enviable.   Once the honeymoon was over, Zeus reverted to his earlier "playboy" lifestyle, married or not, compulsively seducing or raping whichever of the Greek goddesses or mortal women caught his wandering eye.

His amorous exploits left the regal goddess Hera feeling betrayed and humiliated on numerous occasions.  To make matters even worse, Zeus often showed more favor towards the offspring of his illicit liaisons than he did to the children Hera bore him.

In Greek mythology Hera, although wounded, remained faithful and steadfast in her loyalty to Zeus, electing instead to vent her fury on "the other women" rather than Zeus himself even though it was usually Zeus who had deceived, seduced or raped the innocent women.

This wasn't always Hera’s reaction, however.  On one occasion she decided to give Zeus a "taste of his own medicine" by conceiving and delivering a child by herself, proving that she really didn't need him anyway.

It didn't work out quite as she'd hoped. She gave birth, as the sole parent, to Hephaestus (God of the Forge) who was born with a deformity that made him lame.  Zeus was not impressed, and Hera rejected her son, sending him away from Mount Olympus to grow up among the mortals.

At other times, in reaction to his continuing infidelities, the goddess Hera simply withdrew from Zeus and the other Olympian gods and goddesses and wandered around the earth, often in darkness, always eventually ending up back at the home where she'd spend her happy youth.

In spite of how he had mistreated her, Zeus did love Hera and, more than that, felt as if part of himself was missing when she was not there for him.

Once, panicked that Hera didn't seem to be in any hurry to return this time, he invited her to a "mock" marriage ceremony that he'd arranged to a princess near her home.

She couldn't help but be amused to discover him making his vows, not to a princess, but a statue! Hera's laughter broke the ice, and she forgave him and returned to Mount Olympus to resume her role as wife and queen.

It is unfortunate that it is not the goddess Hera's nurturing or her steadfastness in the face of adversity that are remembered today, but mostly the stories of her jealousy and vindictiveness.

Some historians argue that the goddess Hera was unjustly portrayed in the famous stories of Homer, probably because he was himself victimized by a mean and shrewish wife.

More than any of the other Greek goddesses, the goddess Hera reminds us that there is both light and dark within each of us and that joy and pain are inextricably linked in life. The Greek goddess Hera represents the fullness of life and affirms that we can use our own wisdom in the pursuit of any goal we choose.

Hera (also known as the Roman goddess Juno) is often represented by symbols associated with her regal, yet generous, behavior.  It is not surprising that many of our icons representing love and marriage are derived from the ancient goddess symbols of Hera.

General: Milky Way (our galaxy), the seasons of the year, diadem (diamond crown) or tiara, spas and baths

We have 961 guests and no members online