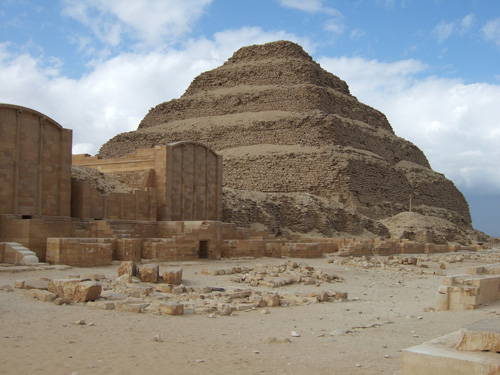 Egyptian pyramids represent the Egyptian culture and civilization. They are world-famous structures, which the Egyptians are proud of. The ancient Egyptians built pyramids as tombs for pharaohs and their queens. Ancient Egyptian pyramids are among the largest structures ever built. They epitomize the Egyptian civilization of the ancient times. During the early years of the Dynastic period of Egyptian history, people were buried in structures called mastabas, the flat-roofed, rectangular buildings with outward-sloping sides. Architect Imhotep is said to have conceptualized the stacking of mastabas to form a pyramidal building. This idea gave rise to the Step Pyramid of Djoser, designed for Pharaoh Djoser during the 27th century B.C. It was believed to be a way along which the pharaoh’s soul would travel towards the heavens. This was the first time a gigantic pyramid was built. With the passage of time, many more pyramids came up. Most of them were built during the Old and Middle Kingdom periods. All of the Egyptian pyramids were built on the west bank of River Nile, as the west, being the side of the setting sun, was associated with the dead.

Pyramids are regarded as being burial monuments. The shape of Egyptian pyramids denote the primal mound from which the Earth is believed to have originated. The shape also represents the rays of the sun. The Egyptians often named the pyramids in ways referring to sunlight. According to a certain theory, the pyramids provide means of resurrection. A shaft that extends from the burial chamber towards the sky is believed to be a way for the journey of the dead pharaoh’s soul to the heavens. The ancient Egyptians called the pyramids as ‘mer’, meaning Egypt itself. This reflects the close relationship of Egyptian pyramids with their culture.

For building the Egyptian Pyramids, quarry stones were carved with copper chisels. A recent study says that the building blocks of pyramids were manufactured from limestone mixtures. Most pyramids had polished and highly reflective faces made out of white limestone. It has taken around 27 years each, to build most of the pyramids. There are about 81 to 112 pyramidal structures in Egypt today. Due to a lack of proper preservation and care during the long intermediate period, today they exist in the form of ruins. The ‘Headless Pyramid’, as Karl Richard Lepsius called it in 1842, was rediscovered in 2008. Till today, Archaeologists have been discovering many other pyramids.

The Great Pyramid of Giza, built for Pharaoh Khufu, is the largest and the oldest of the three pyramids in the Giza Necropolis that borders Cairo, Egypt. It is one of the seven wonders of the ancient world. It remained being the tallest man-made structure in the world for 3800 years.

Saqqara is the oldest standing step pyramid of the world. It is 30 km south of today’s Cairo. Pyramid of Djedefre, where the son and successor of Khufu was buried, stood 8 km to the North of Giza. It was believed that its construction was left unfinished. But the archaeological studies of the present times have revealed that its construction was completed and that it was of the size of the third-largest pyramid of Giza. The discussion on Egyptian Pyramids cannot end without making a mention of the Great Sphinx. It is a large human-headed lion in Giza. It stands against the Khafre’s pyramid, the second-largest pyramid of Giza.

Egyptian pyramids have a cultural and historic importance. They are surrounded by mystery and awe about the purpose of their construction and their architecture. Egyptians have interesting stories to tell about these pyramids. You cannot leave Egypt without having seen them.