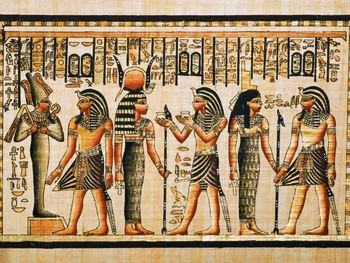 Every aspect of Egyptian life was guided by religion. Egyptian religion was based on polytheism that means the worship of many deities. The Egyptians had as many as 2000 gods and goddesses such as Amun, who was worshiped throughout the whole country. Some of the Egyptian gods and goddesses were represented as part animal and human.

Egyptians considered animals like the bull, the cat and the crocodile to be holy. Amon-Ra and Osiris were their two chief gods. The Egyptian Book of the Dead contains the major ideas and beliefs of the ancient religion. Egyptian religion stressed an afterlife, because of which Egyptians spent much wealth and time to prepare for survival in the next world.

The temples were considered the dwelling places for the gods, and were constructed everywhere. The purpose of the temple was to be a cosmic center to be used by men to communicate with the gods. As the priests gained more power, tombs became a part of the great temple. The duties of the priest involved taking care of the gods and attending to their need. Priests also had other duties such as teaching in school, performing the funeral rites, supervising artists and their work and advising people on their problems.

The Egyptian people saw death as a transitional stage in the progress to a better life. They believed that full potential was possible only after death. The Egyptians believed that each person had three souls – the ka, ba and akh. It was considered essential for the body to survive intact if these were to function properly. It was the Egyptian belief in life after death that became the driving force behind their funeral practices.

After a person died, the priests recited prayers and made a final attempt to revive the person. Once this was done, the body was washed and purified in a special shelter called an ibu. Then the body was taken to a wabet which is the embalmer’s workshop. The organs were removed from the body after making a cut on the left hand side and then packed for 40 days with a salt called natron. Once the forty days had passed, the inside of the body was filled with sawdust or linen, resin and natron. The body was then wrapped in bandages with amulets and jewelry between the layers. The chief embalmer who wore a jackal mask to represent Anubis placed a portrait mask over the head of the deceased. Once this was done, the wrapped body, or mummy was placed in a coffin.

After 70 days had passed, in which the mummification took place, the mummy was placed in a decorated coffin. Statues, furniture, food, games and other items that would be useful to the next life were also buried with the mummy. Opening of the mouth was the last right performed by the priest. This ceremony was to magically provide the deceased the ability to eat, speak and make full use of his body. The tomb was sealed after placing the mummy in the sarcophagus.

Osiris was usually represented as a bearded, mummified human with green skin and wearing the atef crown. Osiris was the god of vegetation and earth. In his death, Osiris symbolized the yearly drought and in his miraculous rebirth the periodic flooding of the Nile and the growth of the grain. Osiris was god-king who was believed to have given Egypt civilization.

Horus was one of the most ancient deities of the Ancient Egyptian religion. Horus was the god of the sky and the sun of Osiris. Horus was depicted as a falcon, or a falcon-headed man which led to the name Horus which meant the distant one.

Anubis is the jackal-headed god of Egypt. Anubis was the guardian of the dead, whose task was to take the souls to the underworld and protect them on their journey. It was Anubis who deemed the deceased worthy of becoming a star. Texts reveal that Anubis weighed the heart of the dead against the feather symbol of Ma’at, the goddess of truth.

Isis was an important Egyptian goddess. She is depicted as a woman wearing a vulture headdress and the solar disk between a pair of horns. Sometimes she is depicted wearing double-crowns of the North and the South with the feather of the Ma’at or a pair of ram’s horns. The most important functions that Isis performed were those of motherhood, marital devotion, healing the sick and working of magical spells and charms.

Sekhmet was generally portrayed as a woman with the head of a lioness surmounted by the solar disk and the uraeus. The name Sekhmet is derived from the root sekhem which means to be strong, mighty and violent.

Hathor was the cow-goddess of love and also the deity of dance, happiness and music. Not only that, Hathor was the protector of women too. She was depicted as a woman with the head of a cow, or a woman who wears the stylized cow horns which hold in them the solar disk. The papyrus reed, the snake and the rattle are some of her other symbols.