Before The Pharaohs: The Evidence for Advanced Civilization in Egypt’s Mysterious Prehistory 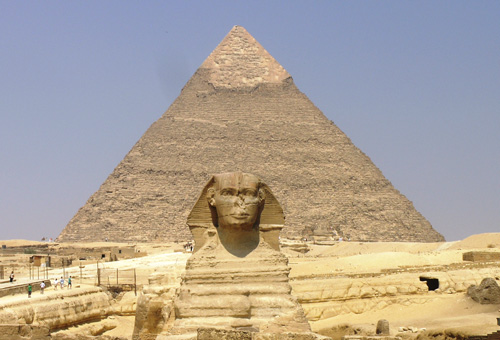 One of the great achievements of humankind, The Great Pyramid of Giza impresses even today by the ingenuity its constructors had to build it. Although thousands of years passed, it is still among us.

One of the wonders of the world, I do not think that there has been anything on this earth that has puzzled man more, and brought up more questions then the Great Pyramid of Giza. People have attributed the making of this great pyramid to everything from aliens to the psychological power of the mind…it is really weird what people can come up with and even believe when they are refusing to believe something else that is much more logical.

People who have the ability to think logically are ready to admit that the Great Pyramid was built by the Egyptians, with their crude form of tools they did figure out how to cut and move such huge blocks of rock and get them into position, but not just any position, they placed the pyramid in perfect alignment with several stars…other people cannot accept this, human beings, that did not even have the wheel yet, could not possibly have been smart enough to figure such things out, they could not possibly have had such a great knowledge of the stars. They seem to forget that Egypt was the greatest civilization of its time, nothing and nobody surpassed it for hundreds of years, and let’s not forget the old proverb, "where there is a will there is a way." The Egyptian’s god, their pharaoh wanted something, so why would they not do it for him. By the way, evidence has been found that the Great Pyramid was build by free men, not by slaves as we see on TV documentaries.

Over the years some of the things that people have believed about the Great Pyramid of Giza is enough to make a person laugh, for example; it was first believed that the great pyramid was the place to go if you wanted to meet some evil demons and spirits of the dead, the ill trained scholar who came up with that theory turned the Great Pyramid into a Holy Meca for all the sorcerers, witches and warlocks of the time.

This went on for a while but another person, who could not even call himself a learned scholar by any stretch on the imagination, claimed that the Great pyramid was built by the ancient Atlantiens, or by the precious few that had escaped the destruction of Atlantis, by this Great Pyramid they also placed a hidden chamber of records that held the wealth of knowledge of Atlantis. This man went on to predict that this so called chamber would be found in the last twenty years of the millennia…the crazy part is the fact that people actually believed him, and the 1980’s and the 1990’s was full of joyous people expecting the Chamber to be found. They were disappointed to say the least. Such a chamber never existed, except in the imagination of an attention seeking fraud.

In more recent years other theories have come, one of these is the belief that aliens came to earth hundreds of years ago and gave to man knowledge, this was evidently some kind of jump start for the human race, bringing him out of the Stone Age. Then there are the ones who think a particular alien came, which the Egyptians named Ra, and this was the alien that built the Great Pyramid.

After leaving the earth, the Egyptians took this knowledge that they could not understand, and used it like magic. One theory that I have read about recently is that the ancient Egyptians only had a small workforce, but they used magnets and the power of the mind to move the great blocks into place.

So many theories, so many ideas, why is it that people refuse to accept what is right in front of their noses…the building of the Great Pyramid is depicted on its walls, the walls are full of carvings and paintings perfectly describing the way that the big pieces of rock were moved, how it was taken out of the earth, even the use of the pyramid.

There is no real mystery about the way it was built, it was simply the greatest nation on earth, using its power to make their pharaoh something that would tell of his might and power for hundreds of years. And do you know what, they succeeded!