An Introduction to the Medieval Labyrinth

An Introduction to the Medieval Labyrinth 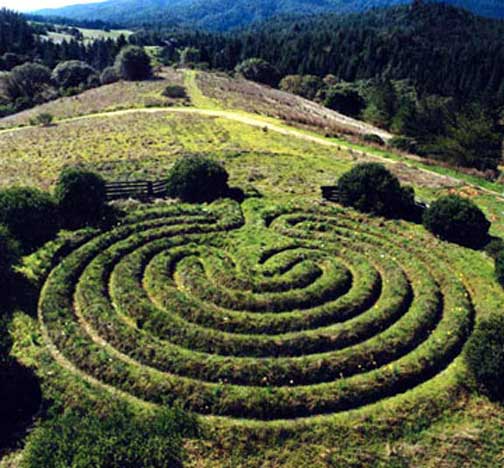 The Classical Graphic Motif of the Labyrinth

Even a small-scale model can be traveled, either visually or with the finger or a pointed instrument. Kinesthetic sensations will be aroused by even the simple visual traveling, and will bring the rhythm of the labyrinth to be felt. Using the finger is still easier.

The classical labyrinth has only one path, with no loops or dead-ends. The best-known is the one on the floor of the Chartres cathedral, in France. It was incorporated in the floor pavement around 1200, during the construction of the cathedral.

The Revival of the Classical Labyrinth

For the last ten or twenty years, there has been a renewal of interest in the classical labyrinth, especially the Chartres labyrinth: it is considered both as a fascinating cultural object and as a powerful spiritual tool. A common practice is to meditate while walking the labyrinth reproduced on the floor or ground. This revival also concerns other models of the classical labyrinth, in particular the Cretan labyrinth.

During the history of the European classical labyrinth, one can distinguish three periods, which have produced three different design types: the Cretan labyrinth, the Roman labyrinth and the Medieval labyrinth.

The oldest known examples of the graphical motif of the labyrinth were engraved on the natural stone, according to a design which was simpler than that of the medieval labyrinth, but nevertheless already well defined. That model was named Cretan because it had first been found on Cretan coins. However, the design is much older than the Cretan period. It is built on an eight-turn spiral pattern delineating seven lanes. The eight-turn spiral pattern results from the meandering extensions of the four arms of the initial cross. That design was much diffused and is still in use to-day. There exists a rectangular version of that design, also much diffused, but it has no relation to the Medieval labyrinth. 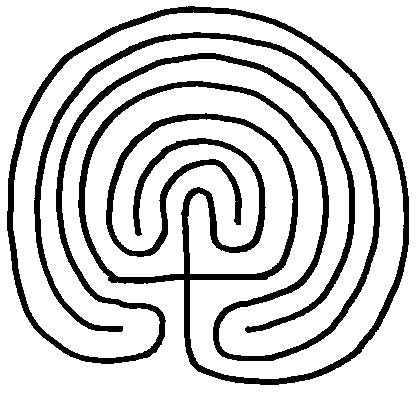 The Roman civilization has developed a particular labyrinth design, used mainly in floor mosaics. That design has been found on the floor of a christian church in Algiers dating from about 324. The Roman labyrinth is in four quadrants corresponding to four identical labyrinths visited in sequence. The number of lanes varies. It exists in round and square versions. Against most authors, I believe that the Medieval labyrinth evolved from the Roman labyrinth, not from the Cretan labyrinth. 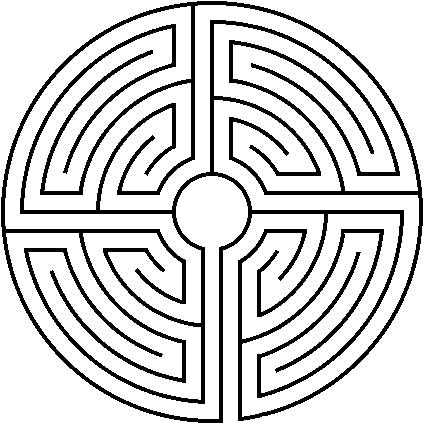 The Medieval design of the labyrinth was mainly used as a manuscript illustration. It is built on a 12-circle concentric pattern delineating 11 lanes. These numbers result from the rhythmical structure of the path of the labyrinth, which also necessitated the radial division into four quadrants. The oldest known manuscripts with labyrinths date from the 9th century. One of them has the Cretan labyrinth; another one, from 860, is the first witness of the design which, more than three centuries later, will be realized on the floor of the Chartres cathedral. From the moment of its appearing, it was the most frequently used: it must somewhat have been considered as the most perfect. It is now known under the name of Chartres, which was its most famous occurrence.

Before that date of 860, a relatively long period must have been necessary to evolve the medieval design from the Roman design. Known documents allow us to imagine that evolution, but not to reconstruct it precisely nor to assign dates to it. After that, this new labyrinth design continues to illustrate the manuscripts, but the period of creative evolution seems to be terminated. 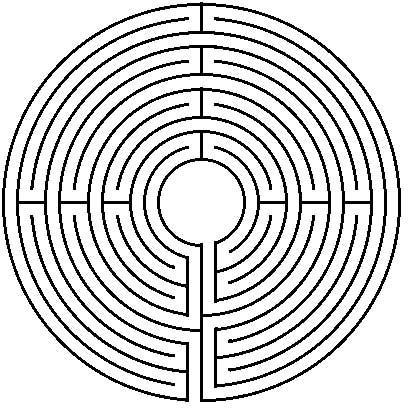 The labyrinth as a graphic motif is not mentioned in any ancient or medieval text. It is therefore impossible to know directly what were its meanings for the medieval times. But it certainly had a great importance for the illustrators who were drawing it: in fact, it had become a very sophisticated technical object, which only its drawers seem to have been interested in (and also, eventually, the architects who enlarged it on the floor of their cathedrals).

From Manuscript to Floor

Around the year 1200, in France , there were a few large labyrinths incorporated in the floors of cathedrals. Until then, for several centuries, the labyrinths had been drawn on the parchment of the manuscripts: they measured about 6 inches (15 cm). It seems that those large floor labyrinths measured between 33 and 43 feet (10-13 m), depending on the width of the nave. No contemporary document is of any help as to the reason of that transfer from the manuscript to the floor.

There had been smaller labyrinths on the floors before. The Roman labyrinths were normally mosaic floor decorations and some Medieval labyrinths were placed on floors (Pavia) or walls (Pontremoli, Lucca), but the new floor labyrinths were really much larger and should be considered in their own category.

The best known classical labyrinth is that of the Chartres cathedral (in France, 96 km S-W of Paris). It is also the only one of the larger medieval labyrinths still existing (the one at St-Quentin dates from 1495, which is almost three centuries later). The Chartres labyrinth measures about 43 feet (13 m). It has unique decorative elements which make it easy to identify and which certainly contributed to its fame. Its general design is that of the 860 manuscript: it is, by far, the most common design in the manuscripts and even on the floors of the cathedrals. 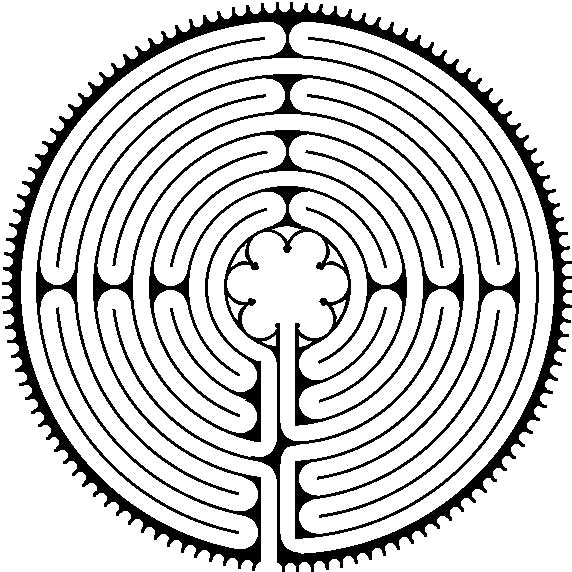 The design of the Reims labyrinth seems to have existed, during the medieval times, only on the floor of the Reims cathedral. The floor labyrinth was destroyed in 1778, but an architect named Jacques Cellier had made a rough drawing of it around 1585. From that drawing we know its general geometric form, which is octagonal with bastions, and its path, which is different from the Chartres labyrinth's. The general form, octagonal with bastions, was original at the moment of the construction. Later, it was used elsewhere, but with the Chartres path pattern. The Reims path pattern has been found nowhere else, except in a French manuscript of the beginning of the 15th century, where it also has the octagonal form with bastions; that drawing may of course have been copied from the floor labyrinth at the Reims cathedral.

The analysis of the path pattern of the Reims labyrinth and its comparison with that of the Chartres labyrinth are greatly facilitated if we translate it first in its "script" version, that is, in a round version without bastions, like the ones in the manuscripts.

The path pattern of the Reims labyrinth may be unique in the known medieval tradition, but it shares with that of Chartres certain rhythmical qualities. The comparative study of these two labyrinths have brought to my attention two notions that are essential in the study of the medieval labyrinth: the notion of its specific rhythmical structure, and that of the canonical or perfect labyrinth.

The Rhythmical Structure of the Medieval Labyrinth

The specific interest of the medieval labyrinth resides in its rhythmical structure. What the illustrators who were drawing it were looking for is a path with a good rhythm. I will now describe that rhythm in general terms.

After a short mainly radial introduction, the general rhythmical movement of the Chartres labyrinth is of an increasing amplitude on the way going in (decreasing amplitude going out). The path going in first visits the smaller inner circles and then progresses to the larger outer circles. The entry to the center happens during the most intense and energetic state created by the movements of the larger circles, after just a short radial transition.

As to the Reims labyrinth, its rhythmical movement is of a decreasing amplitude: its path starts on the larger circles and finishes in the quietness of the inner circles.

The Notion of Canonical or Perfect Labyrinth

Canonical means embodying the rules (canon), which, in our context, is the same as being perfect. Here now are two of the rhythmical properties of the path structures of the Chartres and Reims labyrinths which will allow us to consider them as perfect or canonical and distinguish them from the non-canonical labyrinth designs.

First, all segments of the path are quarter-circles or half-circles: no segments longer than that.

Then, the sequence of the elements of the path is reversible: that is, identical elements occupy the same position in the sequence going in the labyrinth and going out of it.

These two properties are sufficient to identify canonical labyrinths. They have also been mentioned by Robert Ferré and Craig Wright (see bibliography).