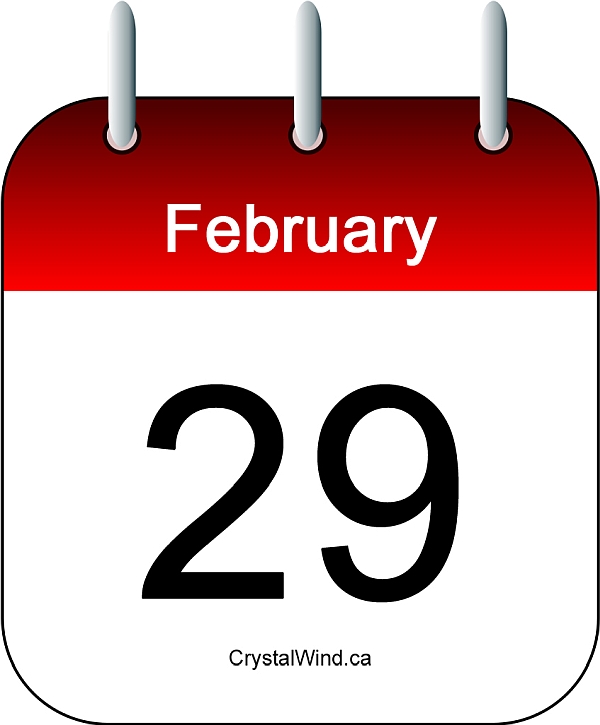 Do you feel like doing something out of the ordinary today? It might be because on Leap Day interesting things have happened throughout history. Everyone knows you have 365 days on the calendar, but nearly every four years you get an extra day.

This happens since nearly every four years the dates on the calendar don’t line up with the true year, or the amount of time it takes the Earth to orbit the sun. In other words, leap year is the year an extra day is added to the month of February to synchronize the seasons with the calendar.

If you think having a leap year is confusing, wait until we talk about the "leap second."1 In both cases, with the Leap Day and leap second, scientists adjust the calendar and time to bring the solar day into alignment with Universal Time used in sensitive applications, aviation and the internet.

A leap second accounts for a difference in the gravitational pull on the Earth from the sun and moon. As the Earth rotates it slows imperceptibly so one second of time is added intermittently to the clock.

The last one happened at midnight December 31, 2016, and the next is scheduled for June 30, 2020. The extra second has been added 27 times since 1972. While a leap second may be fascinating, it is unnoticeable in your day. But, an extra day every 4 years may be something to celebrate.

It Started as Julian and Ended as Gregorian

The addition of one day every four years is due to the sun. It takes the Earth 365.242189 days to rotate around the sun one time. Expressed another way, circling the sun takes 365 days, 5 hours, 48 minutes and 45 seconds. When calendars to mark the year were first created, they were based on 365 days in a year without any additional hours or minutes.

The change began in 46 BC2 when Julius Caesar asked the Greek astronomer Sosigenes to adjust the Roman calendar with the seasons.3 One of the adjustments called for an extra day to keep the calendar, Earth and sun in sync. But too many leap years created another problem.

By 1577 the difference between the number of days in the Julian calendar base — 365.25 days — and the actual number of days — 365.24219 — resulted in the calendar being 10 days out of alignment with the Earth's position relative to the sun.

To correct for the 11-minute discrepancy, Pope Gregory XIII created the Gregorian calendar.4 At the same time, 10 days were dropped from October that year and February 29 became the official additional day.

The point was to make sure the spring and autumn equinoxes fell on the same days each year.5 The equinox describes the tilt of the Earth's equator in relation to the sun over the course of one year.6 The word is from Latin, meaning aequus (equal) and nox (night) since on the spring and autumn equinox the length of day and night are each 12 hours at all points except at the North and South Poles.

Although leap year happens on your calendar every four years, it doesn't happen exactly every four years. During Leap Year the extra day is added to the end of February making that year 366 days. If the solar year, sometimes called the tropical year,7 was precisely six hours longer than the calendar year, then adding one day every four years would make up for the 24 hours lost.8

So, a Gregorian calendar has a slightly more complex set of guidelines. The criteria that helps identify which years are leap years begins with the rule of division. If the year is divisible by four then it is a leap year. However, years that mark centuries are different. These must be divisible by 400. This meant 2000 and 2400 are leap years but 2200 will not be. 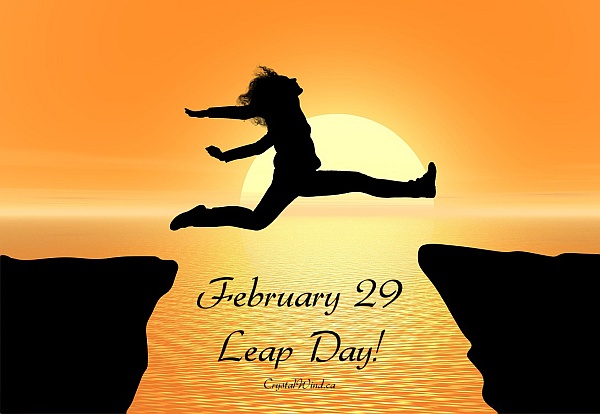 The idea of adding an extra day to the calendar every four years seemed silly to some. One British play poked fun at it with the inclusion of a joke that on that day, women could act like men.9 The play was meant to be ridiculous but by the 1700s a tradition was born.

Now it's known as Bachelor's Day in the U.K. or Sadie Hawkins Day in the U.S., a day when it's acceptable for women to ask men for their "hand in marriage." The tradition continues to be popular in the U.K., inspiring some stores to offer discount wedding packages to those who said yes on Leap Day.

One legend has it that women proposing on Leap Day dates back to when English law didn't recognize February 29.10 The idea was if a day has no legal status it was acceptable to break tradition. In other cultures, a man would be fined if he said "no" to a woman's proposal of marriage on Leap Day. In Denmark he was bound to give her 12 pairs of gloves and in Finland, cloth for a skirt.

Traditions attached to marriages in Leap Year don't stop there. In Greece, 20% of couples don't get married in Leap Year as they believe it's bad luck. Engaged couples aren't the only ones who think there may be some bad luck in the leap year.

In Scotland they say, "Leap Year was ne'er a good sheep year." as they thought livestock didn't thrive in those years. Mother Nature Network reports the Italians go a bit further:11

"In Italy, where they say ‘anno bisesto, anno funesto’ (which means leap year, doom year), there are warnings against planning special activities such as weddings. The reason? ‘Anno bisesto tutte le donne senza sesto’ which means ‘In a leap year, women are erratic.’"

The twin cities Anthony, Texas, and Anthony, New Mexico, took the concept of Leap Year to heart and declared themselves the leap year capitals of the world. Each year they throw a Worldwide Leap Year Festival that goes on for four days, including a birthday party for those who were born on the day.12

The festival was proposed in 1988 when two women born on Leap Day, one in each city, proposed the event that includes parades, dancing and tours. The gala has attracted people from around the world.13

In Honor of the Leap Year Baby

Most of the 4.1 million "leaplings" or "leapers" don't wait four years to celebrate.14 Birthdays are either commemorated on February 28 or March 1 — until February 29 rolls around again. The chance of being born on that day is 1 in 1,461, according to History.com.15

If the chances of being born on Leap Day are that low, then what are the odds that one family might have three children born on consecutive leap days? History.com reports that the Henriksens of Norway made the Guinness Book of World Records when Heidi, Olav and Leif-Martin were born in 1960, 1964 and 1968, respectively.

Others who claim Leap Day as the day of their birth include singer actress Dinah Shore, motivational speaker Tony Robbins and big band leader Jimmy Dorsey.

Those born on Leap Day have access to a special club launched in 1997.16 The mission of the Honor Society of Leap Year Day Babies (HSLYDB) is to promote awareness and the challenges people born on Leap Day face with insurance companies and governmental documents. The website says:17

Corporations also have had some difficulty with people born on a day happening only once every four years. In 2008 Toys R Us had a computer glitch that caused Leap Year babies to miss out on their personalized birthday cards from Geoffrey the Giraffe, the Toys R Us mascot.18 The problem was fixed after the co-founder of the HSLYDB wrote:

“How do you explain to a five-year-old that they won’t receive a birthday card from Geoffrey over at Toys "R" Us this year, because the Toys "R" Us computer has no way to recognize their birthday?”

More than a few interesting events have happened on February 29. One quirky item is February 30. This rare date happened in 1712 in Sweden and Finland when they added the day as they switched from the Julian to the Gregorian calendar.19Here are several more happenings on a day that happens just once every four years:

We have 915 guests and no members online