Ascended Master Serapis Bey
A+ A A- 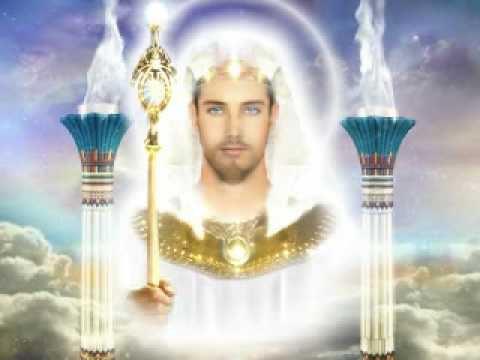 Serapis Bey is from the realm of Bey, hence the name, wherein is His dwelling place. He is the great disciplinarian known through the centuries for the action of strict discipline. Real discipline is not stipulation over another which would thwart the innate progress, but instead it is a holding in check the human qualities so that the inner or Real Self can have expression. This is very essential to the attainment of the Ascension which is the culmination of all embodiments.

Who was Serapis Bey

He came as a guardian to Earth's evolutions, and took physical embodiment as many did. It is said that He came from Venus. His inner service is in the Fourth Sphere and He works with the Christ Selves of the unascended life-streams there.

The Ascended Master* Serapis Bey is the Chohan of the Fourth Ray.

(Chohan is a Sanscrit word for 'Lord'. To be a Chohan of one of the Seven Rays means, the energy of that ray in Christ and God, flows through that Master to all on earth who are evolving on that particular Path).

The Fourth Ray is the White or Crystal Ray of Purity, Discipline and Joy. It is the Ascension Flame, and is the White Light of the Mother in the Base-of-the-Spine Chakra.

Serapis works with spiritual seekers to help them develop the qualities of Purity, Hope, Discipline, Excellence and in gaining mastery over the Base of the Spine Chakra and gradually and safely raising the Kundalini Fire that is stored in this Chakra. He is a great lover of the Divine Mother and of her light and fire within all souls.

He is known as the Great Disciplinarian.

Serapis Bey served several lifetimes as high priest on the continent of Atlantis. Serapis was the priest in the Ascension Temple on Atlantis before its sinking, to whom was delegated the task of taking a portion of the Ascension Flame to safety. He with forty of the Brotherhood sailed in a boat to Egypt, according to the directions they had been given. Just after their landing on the Nile River in the locality of Luxor they were aware of the sinking of Atlantis by the rumble and shaking of the Earth.

He established a Temple there for the Ascension Flame and has been the guardian of that Flame ever since. Some trusted Brother in physical embodiment would stand guard when he was at inner levels in between embodiments. He was the last High Priest with the responsibility of removing the sacred crystals prior to Atlantis’ sinking. Since the sinking of Atlantis around 12,000 years ago he has had nearly all embodiments in Egypt. 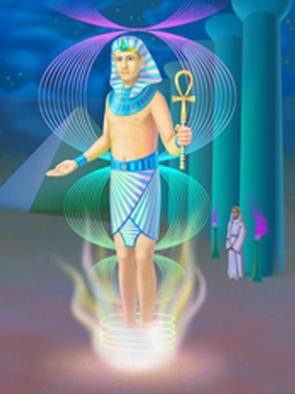 As guardian of the Ascension Flame, he and his followers carried the Flame up the Nile River to Luxor just before Atlantis sank. Serapis was the architect of the Great Pyramid and El Morya was the Master Mason.

Serapis Bey is the Hierarch of the Ascension Temple at Luxor in Egypt. Serapis Bey is known as The Egyptian because of his multiple Egyptian incarnations. He was a Pharaoh in three different lifetimes and is noted for having the ascension healing temple in Luxor Egypt. While in embodiment in Egypt as and Amenophis III he built the Temples at Thebes and at Karnak.

One of Serapis' other embodiments was that of the Egyptian Pharaoh Amenhoteb III (c.1417 - 1379). During his reign Egypt was at the height of prosperity, peace and splendor. Amenhoteb III was regarded as the greatest ruler on earth. He maintained a high level of diplomatic relations with all nations. He constructed magnificent Temples and Palaces and built the monolithic statues uncovered on the banks of the river.

He also embodied as Leonidas, the Spartan King (died c.480 B.C.) who commanded the Greeks in their heroic stand against the Persians at the Pass of Thermopylae. Thus showing a prime example of courage and fearlessness in fighting for a cause against massive odds. He was well known for the discipline at that time. He was in embodiment in Greece and had something to do with the creating of the Colossus at Rhodes at that time.

He was Phidias in one embodiment, an Athenian archi-tect and sculptor. He brought forth the design of the Parthenon and supervised the building of it. According to one encyclopedia it was dedicated in 438 B. C.

Other incarnations were as a Druid priest and warrior, a Llama in Tibet. 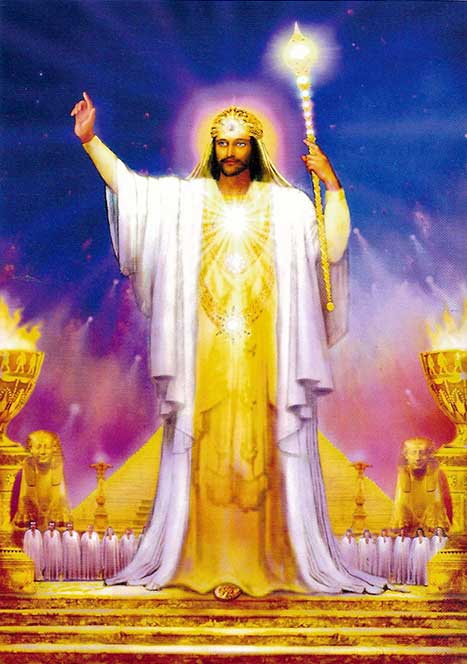 He made the Ascension around 400 B. C. and after that He became Chohan of the Fourth Ray under which comes the action of the Ascension Flame. He is the Master in charge of the Brotherhood at Luxor, Egypt. He works with the Seraphim. Serapis Bey has golden hair and His eyes are amber color. "Celeste Aida" is His keynote. His electronic pattern is a heart.

Serapis Bey is a master energy healer whose work is based in focused intent, reading and directing energy.

Those in close unity with him called him, The Disciplinarian. The image depicts Serapis Bey holding the scepter of Christ Power and in the background a group of candidates for the Ascension.

For further information, see the book 'Lords of the Seven Rays' published by Summit University Press.

*Ascended Master: One who has walked the earth with mankind and who, through Christhood, has mastered time and space and gained mastery over self and oneness with the Divine.

We have 1372 guests and no members online