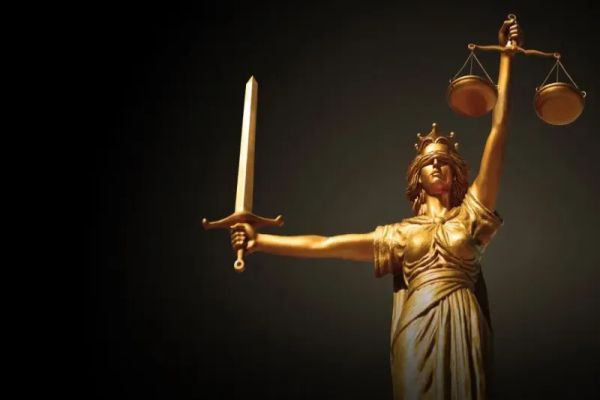 The Gemini new moon on May 30, 2022 aligns with the Mars-like star Aldebaran. It also coincides with the alignment of Mars and Jupiter.

This creates an incredible amount of energy which can easily become aggressive. So the spiritual meaning of the new moon May 2022 astrology relates to constructively challenging any anger and rage.

The May 2022 new moon also coincides with Mercury retrograde square Saturn. Negative thinking and nasty words increase the risk of aggressive energy hurting others. So if you cannot channel this energy into hard work, at least direct it away from the ones you love.

The May 30 new moon at 09°03′ Gemini makes no planetary aspects. But it will still have a powerful influence because it aligns with one of the most important fixed stars used in astrology. The fixed star Aldebaran has a Mars nature and is associated with riches, honor, and success in war. 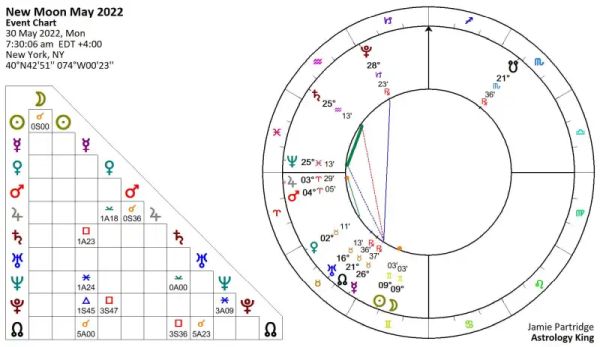 Even though the new moon in Gemini 2022 makes no direct aspects, there are other aspects in the chart above that make this a significant moon phase. The serious impact of Mercury square Saturn will be felt much stronger than the aspect orb of 1°23′ would suggest. Mars conjunct Jupiter creates an extraordinary amount of energy and the aspect orb is under one degree.

Mercury square Saturn restricts and delays your thinking, communications, and travel. It can make you shy, aloof, confused, indecisive, lonely, and pessimistic. There is the potential for criticism, narrow-mindedness, meanness, lying, and slander leading to misunderstanding, arguments, and relationship problems.

Mercury direct on June 3 and Saturn retrograde on June 4 mean that Mercury does not exactly square Saturn. But the aspect stays within a 1°30′ orb from May 29 to June 7. It also adds a heavy sense of karma to this new moon. There will be a price to pay for previous decisions, lies, and nasty words that hurt other people.

The May 16 lunar eclipse at 25° Scorpio has further emphasized this challenging aspect. The lunar eclipse Sun, and Mercury direct, both align with fixed star Algol. This notorious star makes the aspect, and the new moon May 2022 astrology, more unfortunate, violent, and dangerous.

Mars conjunct Jupiter gives an abundance of energy, strength, initiative, sex drive and courage. It is ideal for starting new projects and is a sign of success, especially in physical or competitive areas like sports, business and war.

However, over-confidence and over-exuberance can lead to problems, especially if you pick a fight with a stronger enemy. Sometimes an abundance of energy is not helpful. And this is the case with fixed star Deneb Kaitos at 02°53′ Aries.

Deneb Kaitos is of the nature of Saturn. It causes self-destruction by brute force, sickness, disgrace, misfortune, and compulsory change. [1] Associated with inhibitions and restraint in every way, psychologically and physically. [2]

With Mars: Passionate, violent, subject to accidents and injuries to the head, fevers, disgrace and ruin through own acts. [1]

With Jupiter: High legal or ecclesiastical position, but the danger of reversal, treachery from secret enemies, loss through speculation. [1]

Between the Eyes of the Bull

New Moon May 2022 is in the Sign of Gemini. But as the star map below shows, it is actually located in Constellation Taurus. This discrepancy is due to the precession of the equinoxes. It has moved the Sun Signs almost a whole Sign out of alignment with the Constellations from which they were named over 2000 years ago. The Signs were originally invented as a measuring device. Astrologers had always used the visible constellation and their stars for astrological interpretation. 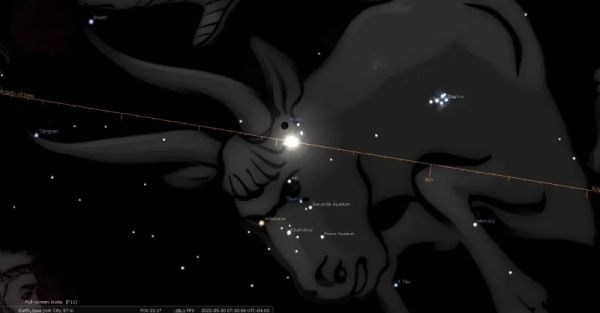 The list below and the image above show the new moon sitting between the eyes of the Bull. The brightest and most important is Aldebaran, but all these stars in the face of the Bull are collectively termed the Hyades.

The Hyades are of the nature of Saturn and Mercury. They give tears, sudden events, violence, fierceness, poisoning, blindness, wounds or injuries to the head by instruments, weapons or fevers, and contradictions of fortune. [1]

The Hyades as a group is violent and troublesome, causing storms and tempests both on land and sea. They have always been associated with rain. Vivian Robson claims that Prima Hyadum is the chief star of the Hyades, but this is at variance with classical literature which gives this prominence to Aldebaran. [3]

With Moon: Tactful, fair ability, difficulties connected with writings, may forge the name of employer or friend but finally escape punishment and retains position, liable to sickness and disgrace, danger of blindness or eye injuries. [1]

Fixed star Aldebaran is of the nature of Mars. It gives honor, intelligence, eloquence, steadfastness, integrity, popularity, courage, ferocity, a tendency to sedition, a responsible position, public honors, and gain of power and wealth through others, but its benefits seldom prove lasting and there is also the danger of violence and sickness. [1]

This is one of the four key stars in the heavens, also called Archangel stars, Michael in this case – military commander of the Heavenly Host. Aldebaran has been much associated with war and military careers. In astrological practice, it is not assumed that Aldebaran necessarily promises success in war – unless it is especially well aspected. [4]

The star is said to presage individuals who are “restless and riotous, always stirring up popular dissent and revolution.” The star is also said to inflame the minds of the people with furious quarrels, and to be an enemy of quiet and peace, malady desiring civil and domestic wars.

But this star is also considered to be one of the most eminently fortunate stars in the sky, portending riches and honor (especially in war). Its natives will always seem to be under stress and in a constant state of anxiety but they are successful in making money. [2]

With Sun: Great energy and perseverance, high material honors but the danger of losing them, danger from quarrels and the law, honor, and riches ending in disgrace and ruin, liable to disease, fevers, and violent death. [1]

Megaera means “the jealous one”. In Greek mythology, she was one of the three Furies, hideous snake-haired monsters who pursued unpunished criminals.

The Furies were the goddesses of vengeance. They were probably personified curses, but possibly they were originally conceived of as ghosts of the murdered. They lived in the underworld and ascended to earth to pursue the wicked. [5]

Find Asteroid Megaira in Your Chart

The May 30 new moon creates an immense amount of energy because it aligns with the massive star Aldebaran. This Mars-like star gives courage, honor, riches, and success in war but also ferocity, sedition, violence, riots and revolution.

The new moon in Gemini 2022 coincides with Mars conjunct Jupiter which also creates an extraordinary amount of energy. It is associated with success in war and other competitive areas like business and sports. But conjunct the Saturn-like star Deneb Kaitos, this intense energy may be associated with destruction, disgrace, misfortune, and violence.

Mercury retrograde square Saturn creates negativity in the form of bad news, criticism, pessimism, meanness, lying, and slander. It also points to karmic retribution, and given the strong Mars theme mentioned earlier, this could be related to acts of violence, especially in war.

This could manifest as trials for war crimes in Ukraine and punishment of rape and the murder of civilians. But it could also be related to abuse in personal relationships and general injustice. Finally, the asteroid Megaera reinforces the theme of victims of unpunished crimes seeking revenge and justice.

The influence of the May 30 new moon lasts for four weeks up to the June 28 new moon. The best time for starting new projects is during the two-week waxing moon phase, from May 30 to the June 14 full moon.

If the new moon May 2022 astrology directly affects your Sign you can read about it in your free Monthly Horoscope. Finally, for more details about how it affects your natal chart see Sun Transits.

We have 2894 guests and no members online