Why We Don’t Call 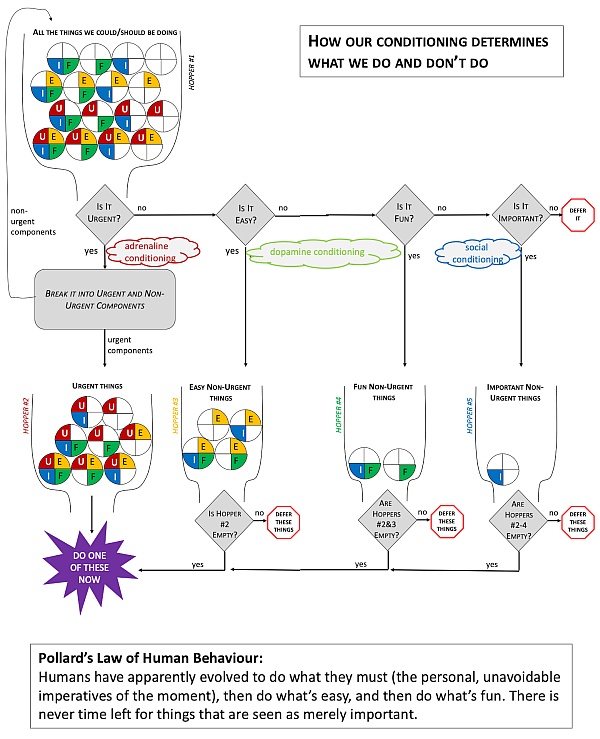 Ten years ago some futurists were predicting that voice-only phone calls would soon be extinct, since video calling was becoming so easy, and since it added a dimension to the communication, and was no longer constrained by low bandwidth, so image quality had greatly improved.

But there were others who said it would never catch on. They were, mostly, right.

There’s been some suggestion that Zoom, being free and almost ridiculously easy to use, along with the constraints over face-to-face communication brought on by CoVid-19, might change that. Nothing gets people to change behaviours faster than not having any alternative.

Yet still there has been no radical change in behaviours. We still put off calling people we know we should call, even if we kinda like talking with them once we do. We still prefer, most of us, to communicate in text (via chat, and/or email depending on our generation) rather than by the much richer medium of video. It’s just easier, and less demanding. Some of us even prefer written/text communication over face-to-face, and this is nothing new either — anyone remember ‘pen pals’?

What’s holding us back from embracing Zoom and its kin for almost all our communications? This came up in a recent conversation I had with my friend Michael Dowd, so I decided to do a bit of research to see if there were plausible answers.

A recent article by Jeremy Rosenberg suggests these reasons for our reluctance to use video for our communications:

And yesterday, Ali Drucker in the NYT also wrote an article on the subject, acknowledging that there was never any real excuse for not staying in touch by video with those we care about who live far away, but that CoVid-19 has provided both more time for such ‘frivolous’ chat and a longing for more connection for many due to the isolation that restrictions have imposed. Will we dispense with our Zoom accounts when the pandemic ends as quickly as we hope to jettison our masks, or will there be an enduring behaviour shift? Ali asks:

So why, actually, are so many of us only just now making video calling a habit? Did I really not see my parents’ faces for months on end, even over a screen, simply because I had the option of socializing with my partner and nearby friends instead? Was I actually “just super busy” or did I want to avoid confronting how much I missed them? How I was quietly nursing the loneliness of feeling like I might not truly know the people I can’t see in person anymore.

There are of course many (mostly under-30s) who immediately took to this new richer way of communicating with friends, colleagues and loved ones right away, but many of them had also been using video less and less until recently.

My sense is there are three groups of people we could be connecting with via video much more frequently than we do:

The reason we don’t, or at least haven’t, connected with them is probably a bit different for each of these three types of circles.

The chart above is a somewhat whimsical graphic recapitulation of what I’ve called over the years Pollard’s Law of Human Behaviour. It should probably be called a Conjecture rather than a Law, but I’d be willing to bet it would stand up to scientific investigation:

Humans have apparently evolved to do what they must (the personal, unavoidable imperatives of the moment), then do what’s easy, and then do what’s fun. There is never time left for things that are seen as merely important.

I think we largely subconsciously (and sometimes consciously) maintain a list of all the things we think we could or should or want to do in the near term, and then our conditioning automatically does triage, according to this Law, to determine what we will, moment to moment, actually do. If we hate the thought of tackling a big urgent task we don’t enjoy, we will tend to procrastinate (if that is our nature) until it becomes so urgent we can no longer put it off, and then we ‘cram’ it in. When we’ve done something urgent that isn’t easy or fun, we’ll rationalize that we deserve to do something easy or fun as a reward for our efforts, so we’ll convince ourselves that nothing else is really urgent, and go ahead and do something easy (yay! checked three things off my ‘to do list’ in 15 minutes!) or fun (bingeing behaviour, often), before acknowledging that those other things really are urgent and we have to get back to them.

This is almost entirely, I would argue, conditioned behaviour. While clearly what everyone considers urgent is different (and that is in itself a cause of endless familial and work arguments), once we’ve got in our heads what we believe to be urgent, and what we thinking to be easy and/or fun, the die is cast: we really have no choice over what we’re going to do.

Melissa Pierson has explained how thoroughly conditioned we are in every aspect of our lives, and that some of that conditioning is biological and some of it is social. I would argue that our decision on what’s urgent is driven principally by adrenaline — when we get cranked up or filled with dread just thinking about something that “urgently needs” to be done. And I’d guess that our decision on what’s easy and/or fun is driven by dopamine — a more positive rush, but one we physically can’t resist giving in to, whenever we can.

That leaves social conditioning as the driver for deciding what’s important even though it’s not obviously urgent, and not easy or fun — like coming to grips with climate collapse or other less immediate, but intractable crises that we simply can’t put off addressing forever. Of course, an emergency like a pandemic, an extreme geological or weather event, or a social uprising like Black Lives Matter or #MeToo or Occupy or Climate Marches, can quickly make something we’ve believed was ‘merely’ important, into something urgent. But once the apparent ’emergency’ has passed, most of us soon reclassify these essential issues as important-but-not-urgent, and only social conditioning still pushes these items onto our agenda. And social conditioning doesn’t ever seem as compelling as biological conditioning — it hasn’t got the chemical kick behind it to drive (and addict) us to devote time to deal with it.

And that, I think, is why we don’t, most of us, call far-away loved ones on Zoom, or on the phone as often as we think we ‘should’. The social compulsion to do so (even though we know it’s important, and that we will almost certainly enjoy the contact once it’s been initiated) just can’t compete with the biological compulsion to finish our work or school homework (urgent — the perceived cost of not doing it now is just too high), empty our inbox or indulge in a favourite hobby or guilty pleasure (easy and/or fun). The social compulsion to eat better (important) just can’t compete with the biological compulsion to grab some chips or cheesecake (easy and/or fun).

Of course, if the far-away loved-one has an accident or illness, contacting them quickly becomes urgent, and in that case connection will happen for sure. But could we make contacting people in any of these three groups more often and more deeply either easier or more fun? Physically and technically and financially it’s already easy, but psychologically it’s not. The longer we put off contacting someone we think we ‘owe’ a call to, or would really like to talk with but feel awkward or uncertain or uncomfortable initiating the call to, the harder it gets. And the eight impediments that Jeremy describes definitely make it harder and less fun.

Perhaps what we need are more stories like the ones Ali describes in her article: The ‘virtual’ celebrations (and who doesn’t love the opportunity to celebrate something?); the ‘virtual’ resumption of old hobbies and activities with people we used to share them with when we lived nearby; ‘virtual’ happy hours with those we have some affinity with (eg alumni) but have never really chatted with on a personal level. All ways of creating meaningful connections that are not dependent on physical proximity.

Making these connections easier and more fun (because there will be no enduring behaviour change otherwise) will obviously be different for each of us — just as what each of us thinks of as urgent is different, so are our definitions of what is easy and fun. But perhaps by asking some questions we might find a way to make them easier and more fun in ways that work for us — as close as one can get to reconditioning one’s behaviour. Questions like:

We may be creatures of our conditioning, but by answering questions like these, and using some imagination to figure out how to make these calls easier and more fun, we might well find ourselves with more appointments on our calendar for conversations that we’re actually looking forward to, and also find ourselves more inclined to make spontaneous, unscheduled calls (in situations when such surprises are likely to be welcome, of course) just to deliver a heartfelt greeting, or a piece of good news, in a way that a text or social media posting could never come close to matching.

back to top
The Shamanic Understanding of the Immune System
Is Being An Entrepreneur Right For You?
Reduce Your Suffering By Realizing The Essence of Desire

Your Weekly Guide To Planetary Influences March 1 To 7, 2021