Ascension Symptoms ∞Archangel Michael
A+ A A-

Archangel Michael: Sacred Union - The Balance Returns after the Grounding of the Sacred Masculine Luminosity 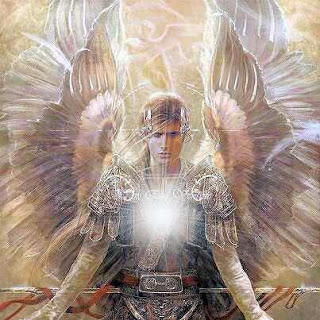 Beloved Family of Light, it has been a tumultuous time this last month as Waves Of Luminous Light have washed over your Beloved Planet Earth, and have been integrated into the Crystalline Grids of the New Earth's Sacred Geometric Structures. It is a moment of Great Joy as the New Frequencies of Light reconnect you with the Ancient Light Codes of the Divine God Force or Creative Intelligence.

These waves of Light Codes that were initiated at the 8/8/8 in August will reach their culmination in a moment of Sacred Union or Sacred Marriage on the 11th of November, or the 11/11/8. At this time, the Divine Frequencies of Masculine and Feminine in their new luminosity will come into Balance in Sacred Union and will express Sacred God Force in the Higher Dimensional energies.

What this means, Beloved Ones, is that the flows of energy that have been creating chaos on the Earth will move into a more balanced form, both within yourselves and your Light Bodies, and also within the Planetary Body. This will give rise to a more balanced energy that will create a New Earth where there is Balance, Harmony and Compassionate Love. The old third-dimensional energies of domination and control will increasingly find no place to be on the New Earth as the old energy forms disintegrate.

Beloved Ones, many of you have asked us how you can know where you find yourself in these fluxes of energy and how you can tell that you are in the Fifth Dimension?

In the Third Dimension, you lived in a dualistic world and this dualism was the foundation of power structures and imbalances that were used to create control. For example, in the duality of masculine and feminine, there is a long history of imbalance and control.

Neither of these forms was balanced, and as such neither reflected the flow of the Divine Light and the Light Codes from the Cosmic Heart.

In the New Earth, these Divine God Forces known as Masculine and Feminine will be held in absolute balance in a Fifth Dimensional Society. There will be no domination of anyone by anyone else, and there will be no social structures that disempower large groups of people.

The Fifth Dimension is a Structure of Unity, Harmony, Oneness and Balance

As you awaken to the Reality of the Fifth Dimensions you begin to perceive how deeply "out of balance" your society has become, and how chaotic it feels as the old begins to fall away as you move slowly towards balance.

The first sign that this process is under way is when you start to feel as though the world has gone crazy and you struggle to hold your inner peace. Beloveds, that is because your "center" is being realigned and you are coming into real inner balance after years of work. What seemed so "real" out there in the world now seems no more than a chaotic mess. And you find it difficlut to see your "place" in this chaos and mess. That is becauses your place is in the New Earth of Higher Consciousness that is coming into manifestation. Your work is to hold your Inner Peace and to hold the Higher Frequencies so that you may be a "manifestation point" for the New Eaerth. New ideas and new teachings will crystallize and manifest around you and flow into being through you when you are in your Fifth Dimensional Body and Form.

So, how you deal withn the choas is to rememebr that you are a Beacon or Transmitter of Inner Balance. This means to achieve inner Sacred Union so that the Light Codes of Fifth Dimensional Peace and Harmony may be transmitted into your environment through your Light Body. The extent to which you choose to do that is up to you, as each one of you is a Light Worker or a Light Warrior who has come to the Earth to participate in this process.

The Divine Masculine Luminosity : What it Means for Planet Earth

As the Sacred Divine Masculine Luminous frequencies are grounded into the New Earth, you can expect a very new and different kind of Masculine energy to begin to arise.

This will be expressed by Men who are in alignment with their Divine Sacred energy, and who choose to interact with women who are in the Divine Feminine Goddess expression in Sacred Union. But it will also become an aspect of women who seek to express the Divine Masculine as part of their Inner Sacred Union.

The New Divine Masculine is an energy that is based in the Flow of Light and Manifestation in Love. It is best represented by the "Bird Man". In Indigenous cultures the Bird Man was a Shaman figure who was like an Eagle, whose work was to  connect the prayers and desires of his people to the Heart of the Divine. In Christian tradition and theology, the "Bird Men" were the Angels who were the messengers and mediators between the Divine and Humanity.

These will be people who care for their Communities and for their cultures. They will steward the Earth because thye know how precious it is and because they hold it in trust for future generations.

They honor all living beings and respect all forms of relationship in love and light. Their focus is on Love, Support, and Responsible Social and Communal activities. They are honorable, and they walk in Integrity and Truth. They walk their talk and their power radiates from their Honesty and Integrity. They shine from their Hearts and their Light Bodies and are honored for who and what they are in their Communities.

Physical "Symptoms" of the Balance Process : What you May Feel

Beloved Ones, make no mistake, this is a powerful process. The recent Lunar Eclipse at the September Equinox helped to bring these energies to Earth. And,as this powerful wave of Primal God Codes washed over you and through the Crystalline Grids, you would have felt physically, mentally and emotionally over-stimulated, and then very tired to the point of exhaustion.

The "over-stimulation" phase might have included lots of energy and an abundance of ideas and new opportunities. In fact, there may have been so many new ideas and opportuinities that you were unsure which one to take first, or how you could manage all of them.

This phase may have been followed by a very "flat" period in which you felt too tired to care and just wanted to rest. This would have been a good idea as your body gets used to this powerful flow of energy and light that is the new Divine Masculine Sacred Energy flow.

As you come into Balance, you will find it easier to remain in Peace and Harmony while still being able to be passionate about life. You will feel deep stirrings of Compassion and a desire to work with the Earth for the sake of your children and the coming generations. You will feel positive and uplifted as your prayers and desires cross that bridge of light to the Divine Heart!

On the 11/11/8, the new energies will come into balance at the 11/11 Stargate or Portal. The 11/11 is a moment of powerful intitiation when the Diamond Light Portal between Heaven and Earth is fully open and the Earth can ascend into Higher Frequencies that align more closely with the Divine Heart. Each one of you can also align your Sacred and Divine Hearts with the Divine Heart of the Cosmos.

This year, at the 11/11, you will experience the Cosmic Blessing of "Sacred Union" both in Galactic terms and on the personal level. On the Galactic Level, the Planet will align fully with the Two Primal forces of the Divine Heart that you call the Divine Masculine and Feminine. This will serve to magnetize the Earth towards Fifth Dimensional Unity Consciousness.

On the Personal level, it will also enable each one of you to access their Inner Power, Integrity and Sense of Community. Your hearts will be opened to both flows of God Source energy.

And, in your relationships, you will find the power and the balance that you seek in Divine Conscious Relationships. These are relationships were the basis is Sacred Union and an expression of Divine Sacred Love. This is a great Blessing from the Divine Heart and we will have more to say on this topic in the months that are to come.

We wish you much Joy and Love as you are invited to the Sacred Union of the 11/11!

This work is licensed under a Creative Commons License.

© 2006-15 Celia Fenn and Starchild Global http://www.starchildglobal.com - You are free to copy, distribute, display, and perform the work under the following conditions: You must give the author credit, you may not use this for commercial purposes, and you may not alter, transform or build upon this work. For any reuse or distribution, you must make clear to others the license terms of this work. Any of these conditions can be waived if you get permission from the copyright holder. Any other purpose of use must be granted permission by author.

We have 975 guests and no members online