Channelings from the Masters: The Crystal Deva
A+ A A-

Channelings from the Masters: The Crystal Deva 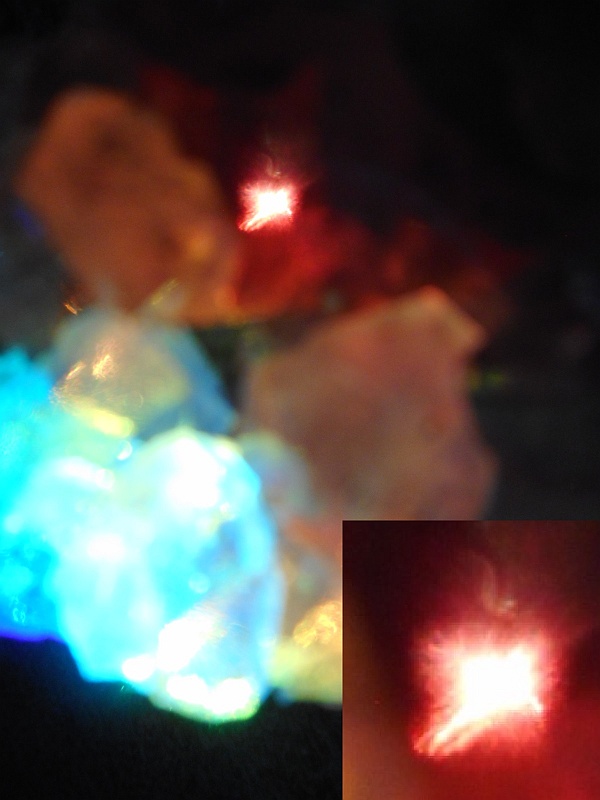 The picture above of an amethystine crystal was taken by my friend and colleague, Gary Martin, who was surprised to see that it clearly shows an image outside of the light spectrums that he called a crystal angel. Intrigued, I asked Archangel Michael to explain what he has captured. The answer is literally magical!

“This picture, to the naked eye, appears as an angel flying above and away from the crystal colours beneath. It could be explained as a trick of the light, but it’s brightness and clarity immediately negates that explanation. There are many different types of light beings that humans have chosen not to believe in because a logical explanation cannot be found. However, I must tell you that the image seen ‘flying’ across the picture is in fact a nature sprite from the Deva kingdom who is re-energising the crystals with Earth Fire. If one looks closely, one can literally see licks of flame emanating from the faery as it soars above the crystal, bent on its task.

It is human nature to assume faeries are female; even though they are androgynous in nature, they can take either male or female form dependent on the energy required to keep the natural world in balance. The Deva Kingdom is of the Second Plane of Existence and is synonymous with nature itself. Faeries, sprites, gnomes, imps and pixies are just some of the beings that exist within the world of plants, but they are actually important keepers of all of the sacred elements of earth, fire, air and water. That is why these beings are also called Elementals.

Like frogs or bees, elementals are important signs of the health and wellbeing of the environment of which they are in charge. Their major task is to maintain the balance between all elements in the living and non-living natural world, so they are extremely sensitive to changes in temperature, alkalinity, acidity and salinity. For elementals to maintain the balance in the natural world, the symbiosis between living and non-living things must remain within a certain ratio of equanimity, purity and harmony. A slight disruption can be put to rights, but a major disruption or act of destruction causes the Devic Kingdom in that environment to become extremely distressed and angry, causing further imbalance to occur.

The role of a Crystal Earth Deva is to use the Earth’s sacred fire to cleanse and rebalance the frequency of each crystal within the Earth. Deep below the Earth are huge crystals whose sound vibrations and light frequencies literally help to maintain the equilibrium of the natural world. All crystals emit powerful energy, but they also absorb energy that can help to cleanse the environment and reduce toxins. The more energy they absorb, the weaker they become, and they can crack, fracture and split. When this happens, their frequency changes which creates imbalance below and above the Earth’s crust. The Earth Faeries are charged with the task of cleansing these important crystals with fire before major damage happens or mending them and putting them back into balance with each other and the Earth.

All crystals contain their own deva who will look after them for the life of the stone, which could literally be centuries or aeons of time. There are devas assigned to every element and the living things attached to them, working to keep the balance of nature through frequencies of sound and light. Increasingly, their job is becoming much harder as temperatures increase, the weather patterns become unseasonal, forests are cut down, waterways are polluted, ice caps are melting and animals become endangered or extinct. As the balance of nature becomes harder to maintain, the human world must take responsibility for climate change and the plundering of natural resources that are literally bringing Mother Earth to her knees.

So, as this crystal deva diligently carries on with cleansing her crystal, let us drink in the brilliance of her light and magic of her very existence, for in doing that we are paying homage to nature, the sacred elements and Mother Earth herself. Are you not so very fortunate to live on a planet that heals itself, provides your every need and which is willing to show you glimpses of her wondrous keepers, Earth Elementals.

We have 1173 guests and no members online