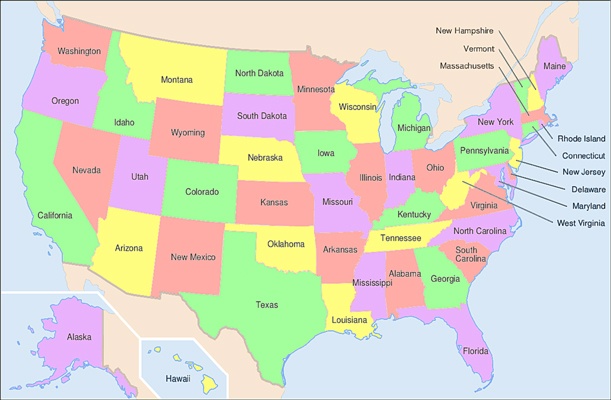 Yes, each state of our nation has its own Sun and Moon sign, as well as its own astrological chart. That’s why we do better in some states, and not so well in others. As well as the states, every nation has a chart, as does every city. Today I’ll give you the Sun, Moon, and ruler of the Sun for all 50 states.

I last gave this to you 6 years ago and have rewritten parts which needed elaboration.

The birth chart of a city, county, state or nation is determined by its incorporation date, or when it was founded by charter or declaration, since that’s when the legal entity began to exist. Of course, the founding of a government is not the same as a “traditional attribution” of a sign to a national culture, though we can assume that any chart for a nation shows the quality of its national culture in some way or another.

While there are many factors determining the quality of a nation’s character, it’s generally agreed that a “founding document” is require to begin a nation. That’s why some believe the Declaration of Independence marks our nation’s birth, while other believe it was founded with the Articles of Confederation. I believe it began with the ratification of the Constitution since that’s the supreme law of our land. And yes, there are many opinions about subsequent modifications to the founding document and how that affects a nation. Several nations have multiple times when they adopted Constitutions.

The original 13 colonies that founded the nation are calculated from when they ratified the Constitution. I would use the same standard for Canada, Australia, Germany, or any other country with states that had to ratify their national governing document.

I use noon charts for political entities since it elevates the Sun and supposedly symbolizes how that entity will "shine its light-life" in our world of nations. For individuals, though noon charts are used by some astrologers, I prefer to use a sunrise, or "Solar" chart, when the birth time is not known. There are different opinions about whether Solar or Noon charts are more accurate, or if they're both equally valid to use for delineation. The reason I use sunrise charts for individuals is because that time "begins" the day, and holds the promise of that day.

Why Are the Sun and Moon of a State Important?

The Sun is the basic Light/Life showing what a Being IS, how that Being is illuminated, and how they illuminate others. It represents the central integrity of the "solar system" of a Being’s life, where the other planets represent various elements of that Life. For a state, the Sun symbolizes the basic nature of the state. It is how it “shines its Light” out into the world.

The Moon, on the other hand, symbolizes the people of the state, the feeling experience people have about that state. If the Sun is what it IS, the Moon is how that "Is-ness" is packaged. The difference between the Sun sign and Moon sign of a person or place is why who we are and how we experience ourselves is different than the way others experience us.

Applying that concept, it’s why a place, whether a town, state, or nation may not seem to conform to its Sun sign, and may seem to have a different “feel” that we’d expect from that Sun sign. All of these are important factors when we’re planning to move somewhere. I believe the chart of a city and state are THE most important factors when we’re trying to know where to go for a better life, with Geodetic Equivalents also an important indicator of the quality of a given place on Earth. (I do not accept ACG as a valid method for determining where to move as that method is fundamentally flawed.)

Besides the Sun and Moon signs, I’ve also included the planetary ruler of the Sun sign, a.k.a. its "dispositor." The dispositor of the Sun sign is important because it exerts a major influence in how the energies of the Sun is expressed, like a shading or background tone to that energy expression.

For example, a Sun in Sagittarius state with Jupiter (its dispositor) in Libra will show a different Sagittarian light than one with Jupiter in Aquarius, where the Sun will show more an Aquarian background tone. Its national character, the people, are shown by the Moon. A Moon in Pisces state would have different kinds of people than a Moon in Virgo state.

These factors make a huge difference when we’re trying to figure out where to live. In the chart below listing the signs for the Sun, Moon, and Sun’s dispositor, you'll see that some Sun signs are over-represented, (7 each for Gemini, Scorpio, Sagittarius, Capricorn) while others don't occur at all, like Aries and Libra. 38 states are represented by only 6 signs.

I've always thought that seemed strange, but this world can be pretty strange indeed. At least with the states there shouldn’t be any confusion about their "birth" sign, since it is determined by when they were accepted into the union. Of course, that raises the question as to whether some of them have a different chart if they were part of the Confederacy, since they believed they left the union only to rejoin it several years later, while from the standpoint of the government they were never allowed to leave at all. That is an unresolved question about which sign actually rules certain states.

Another possible factor that could change these listings is that the states ratified the Constitution before their acceptance into the US, which may produce different results. And a curveball is that all charts are done for Washington DC (the Capitol city is where they were accepted into the US) even though early in our nation's history Philadelphia and New York were the national Capitols before DC.

Hopefully, by understanding 3 primary qualities of each of the states, we can understand what that state is about, and it may serve those who are considering a move somewhere in the US. For mundane purposes, we don't use Uranus, Neptune, or Pluto for sign rulership, but confine rulers to the seven "sacred" planets that have ruled the signs since antiquity.

So here are the signs for when each state was accepted into the United States, set for DC at noon. As an aside, most of them have an Ascendant square to the Sun sign, but not in all cases. I left out the state of Confusion, since we all live there from time to time. ;) Enjoy!

The Sun and Moon Signs for the 50 United States

This indicates that Gemini, Scorpio, Sagittarius, and Capricorn all dominate the Sun signs, and the rulers of these Suns show Gemini and Aquarius in preponderance, with Taurus, Leo, and Virgo also strong. Aries and Capricorn are the Moon signs of over 1/3 of the states. So while some Sun signs spread the influence into Aquarius, the Moon brings Aries to the forefront. Thus 9 signs are strong in the above indicators, with only Cancer, Libra, and Pisces not very strong. Interesting.

As always with things of this nature, if any of you history afficionados want to offer alternative historical dates, please feel free to do so in this comment stream.

All information about the states is from Horoscopes of the U.S. States and Cities by Carolyn Dodson.