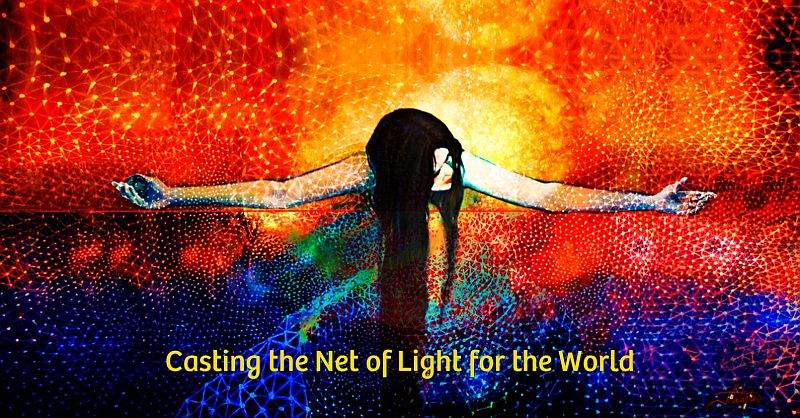 "The lever is moving," the Grandmothers said, and I watched as a metal handle or lever turned slowly.  The movement it made was so subtle it was barely perceptible.  But as I watched it continue to turn, I could see it honing in, getting nearer to pointing straight up.  The lever was righting itself, and as it crept closer to center, chills ran down my back.  "Something is shifting now," I said to myself, "and though what I'm seeing isn't the final shift for this lever, not the last or the ultimate turn it's going to make, still," I said, "things are starting to right themselves."

I looked up at the Grandmothers then but their heads were turned away from me; they were looking elsewhere.  And when I followed their eyes, I saw crowds of masked protesters, the people who'd been demanding justice for the man who'd been killed in Minnesota.  "This shift to the center point that you are seeing now has to do with them," the Grandmothers said, "with the protestors' commitment to truth, to what is fair.  It has to do with their desire for justice and a better life for all of humanity, for all the George Floyds of this world.  They are on target.

"At this time George Floyd has become the centering point for humanity.  His life, his suffering has awakened the world," they said.  "Now and then comes a moment when one life is put into a position of such power and purpose that it affects the entire world.  George Floyd's life is such a one," they said, "and his terrible sacrifice will not be wasted.  Because of what he went through at this particular moment in time, the course of life on earth will change, and humanity will return to being human.

"Stay the course," the Grandmothers said, "and at this difficult time, help one another however you can.  March, sing, pray, serve and speak out.  Speak the truth and love one another," they said. "Help in whatever way is given to you to help. Now your every act, smile, thought, and prayer will make a difference. The collective good pouring forth from humanity at this moment will turn the tide. Mankind is no longer on a collision course with destiny. You have begun to turn toward the light. So, breathe deep, stay calm, love each other and keep on going."

"But Grandmothers,"I said," what about...?"  But, reading my thoughts, they interrupted me.  "Let those who are lost, rage on as they will," they said. "Let them bluster all they want, and while they rant, rave and blame, keep your every thought, word and deed in alignment with the love of the Divine.  Go forward now in love, light bearers," they said, and raised their hands in the air.  "We stand at your back."

Your Weekly Guide To Planetary Influences March 1 To 7, 2021