A Word From Your Hostess of Light - August 2021

A Word From Your Hostess of Light - August 2021 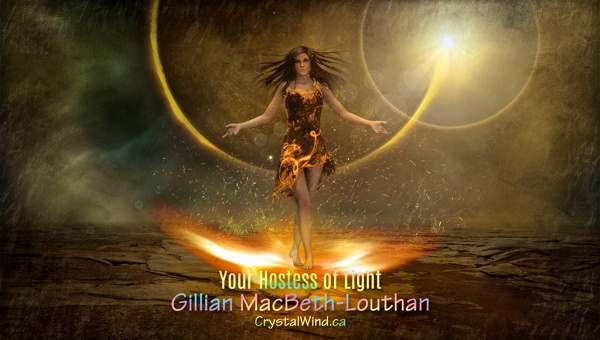 From Your hostess of Light:

As I prepared for this past 33rd year and celebration of the 8:8 Lionsgate the universe pushed and pulled at my brain trying to stretch me into new insights like salt water taffy at the jersey shore. I was going thru a lot of personal emotional deluge as most of us, which seems to clog up the proverbial psychic pipeline. Being an empath and overly sensitive I feel events before they happen. I was shown truths and future events that would be felt around the world. Like a wood pecker on an old tree, (knock on wood) my psychic ducts finally quacked and unclogged. Like a billboard the words ‘self-fulfilling prophecy’ floated to the surface of my personal duck pond.

A self-fulfilling prophecy is a prediction that causes itself to be true due to the behavior of the believer. Self-fulling means “brought about as a result of being foretold or talked about to the point of manifestation,” prophecy refers to the prediction. Another definition of self-fulfilling prophecy is someone “predicting” or expecting something and this “prediction” or expectation coming true simply because the person believes it. In this new virtual world of self-fulling prophecies are just a tweet away from instant manifestation. We all saw this come to life the last couple of years.

An example of a self-fulfilling prophecy is a Bank closing just because of rumors that it would be closing maybe started by a disgruntled employee. This energy then creates what is called a ‘causal loop’ that has a life force of its own. The rumor magnifies everything, the people panic and start withdrawing their money from the bank, forcing the bank to run out of money and close; voila the self-fulfilling prophecy is fulfilled. We have seen this on global level, not only disease but toilet paper. We also saw many prophecies from Nostradamus to Trump fall flat on their faces. Others continued to grow a tale, no matter how much we tried to nip it in the bud with our prayers and commands, covid is an example of that. False beliefs have a life of their own. So how do you nip a negative self-fulfilling prophecy in the butt? You create a bigger shinier more dynamic self-fulfilling prophecy!

Every self-fulling prophecy, no matter how small (like telling your boss a white-lie as to why you cannot come into work today and then having to live out that white lie as it came to life) will eventually create a ‘casual loop’. In the future history will be rewritten as all of the earths self-fulfilling prophecies still tweet and friend forever thru time via the never-ending cloud.

A causal loop is a circular chain of variables affecting one another. One variable affects a second variable, which in turn affects a third variable, and onward. The casual loop is connected energetically to the Casual chakra which is being powerfully activated at this time in history. The causal chakra lives above the Crown chakra and allows a two-way flow of powerful light from the higher realms. The causal chakra has an influential purpose as it provides the seeker with a deep and intimate connection to Spirit. It is Through the Causal chakra we receive messages, information, and inspiration allowing us to see the bigger picture via intuition. The Causal Chakra is connected to the Moon and is your own personal Moon above the crown chakra, absorbing and radiating divine healing feminine light. The Moon is actually an ascended satellite that holds the higher aspects of the divine feminine being broadcast to earth.

As we enter this new dimensional doorway there will be new roads and rules we will have to absorb, like reading the universes palm with a blindfold on. We will learn to create self-fulfilling prophecies with a giant causal loop wrapped around them. Knowing that our words do touch other worlds; Knowing now our words have a great power within them for, for good or bad. We are the director’s producers and actors in our self-fulfilling event. Opening our beautiful causal shiny moon chakra to a point of spiritual attunement and alignment will assist us in knowing our soul desires and destiny. Like a safety hatch in a submarine, reach above your crown chakra and move your awareness thru the dimensional rabbit hole into enlightenment. Learn how to create self-fulfilling prophecies that twirl about seeking a safe place to land upon a healed earth.

Accessing Your Causal Chakra: In order to access the causal chakra get yourself into a place of Stillness, with reverence and Light. Use your breath to inhale and exhale all that is love, all that is healing, and all that is the highest truth!. In your imagination visualize a beautiful light coming from deep within the heart of Mother Earth moving up through your Earth-star chakra, thru the souls of your feet, moving up through all the mini chakras As well as the main chakra points; filling you, cleansing you, clearing you into rejuvenating. Allow your inner mind to follow this powerful energy up thru your Crown chakra. As it passes thru your crown chakra you’ll hear a slight pop, this shows that the causal chakra, your moon-like chakra, has an opening granting you entrance into its place of power.

Using your breath and holding the highest vibration of light and love, move your awareness up pass the crown chakra into your Causal chakra, see the satellite Moon with creamy white light opening itself up to you. What appears solid is not as you move your awareness into this powerful chakra. Allow yourself entrance into this place of expanded consciousness, become one with the energy, open your heart, share your light, manifest with that which sees the future in a place of no time, but all possibility. Ride your magical self safely into this place. See all of your self-fulfilled prophecy’s and dreams come true reaching out their hearts and souls to you and planet Earth. Believe in Causal Effect as you learn to work and play in this place of plenty.

We have 1209 guests and no members online