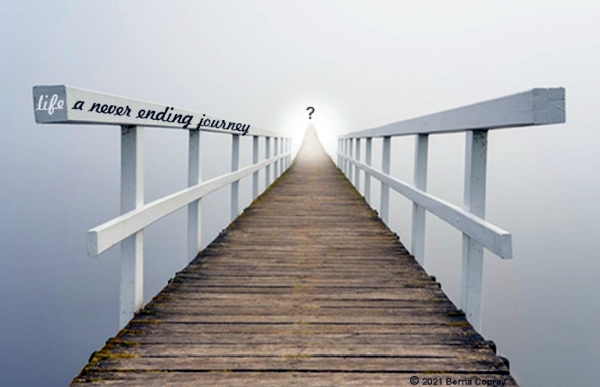 On May 25, 1979, American Airlines Flight 191 took off from Chicago’s O’Hare International Airport. As the plane rolled down the runway, its left engine broke off.

The aircraft crashed less than a mile from the runway, killing all 258 passengers, 13 crew, and 2 people on the ground.

At the time I was a commercial pilot and, naturally, was riveted by this tragic event.

Some said they heard knocking at their doors. But when they opened the doors, no one was there. Dogs barked frantically at the crash site.

One man, walking his dog just after the crash, reported a young man walking up to him with his clothes smoldering and smelling of fuel. The young man said he had to make an emergency phone call. The man turned to point out a nearby payphone. When he turned back, the young man had vanished.

Those were only a few of the strange incidents on that fateful day.

What was going on?

The general answer to the question our title asks is: Life simply goes on.

You see, there is no death. There is only eternal life. Yes, your physical body changes form. But you are not your body. You are a divine being who lives forever.

But because of your general beliefs about death (which is an illusion) and your attitude toward life, you often fear this thing called death.

As the powerful creative beings you are, you manifest what you focus on.

So if you believe when you die you will be lost, then you create the experiences Johnny describes the crash “victims” having. (Although those experiences are only temporary.)

And, of course, the victims drew into their creations those still “alive” in physical form. Those still alive experience the “ghosts” as they would experience other beings around them—beings who have not yet experienced what you call death.

We won’t go on and on here (although we could). Our point is you never die. You are eternal. You are children of God/Goddess.

Therefore, you have all the powers you attribute to God/Goddess. That, of course, means you are perfectly capable of “rising from the dead” as Jesus did.

In this powerful video, Reverend Peter Panagore tells us about his near-death experience.

We have 1300 guests and no members online